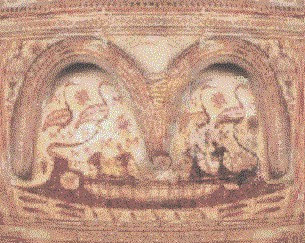 Polynesians always gave male names to their vessels, contrary to European custom. They also invented "twin-hulled" vessels, which currently happen to be all the rage. Back in 1999, the Brits built a massive racing catamaran - 'Team Philips' which was commissioned by the Queen for a great millennial race around the world. Just before the race, it was spectacularly lost at sea in a freak storm while on sea trials in the Atlantic.

Gives the phrase 'the God within' a whole new spin...

Great insights Michael. This also synchs up nicely with our "Lost" Scot
Desmond (who is able to Time travel it would appear). He participated in a boat race (Millennial) round the world, disappeared in a storm and wound up on the Island (Atlantis).

The picture itself reminded me of nothing but the Golden Arches of MacDonalds. Hmmmm...would you like fries with that?

Cheers Gentlemen for the tightly-packed connexions, worked beautifully like the stones slabs at a mayan temple.
are? the LOST tribe inside the island , inside the earth or perhaps they reached the outside.
Desmond , the man who thinks people to death.
I thought about M for Maritime - and Ben Fairhall's ongoing Maritiming and things beginning with M.
While they are obviously 'handles' I still imagine the sea being covered so - hollow earthish

Aferris, could you possibly go into a little greater depth about the Polynesians: Who they were and how early they were circumnavigating, etc?

I've been thinking further on the Shrewsbury-Shropshire connections re: the flooding, and I have come up with something I think you'll enjoy.

Most of the Polynesian theory comes from Buckminster-Fuller's CRITICAL PATH , which is easy to get if u order it. I merely surf along the crest of that wave as it resonates with me. I do not know the state of the planet at various past times, eg winds, currents , ice-age . Neverthless it fulfilled some of the 'conspiracy theory' [ another's word not mine] with human activities, and , with respect to those who propose aliens, at least brought all phenomena into a humanly-do-able sphere. The World-Around Globalisation then took place 1,2,3,4 27000 years ago and the use of ships to secure the global territory ended in 1914, the navigator-priests now able to bring their air-tech into the public domain. The attitude of secrecy compares to the Polynesian priests who lived separately from the rest of the tribe and communicated to them through the king. They built ships , the majority built huts. Kings needed a sign , the priests sailed off into a wide expanse of nothingness and reappeared with something new. They talked to God using Astronomy for their ocean-going calculations.
Architecture is boat-building on land. The people who are used to living on land collect things like mortgages, stuff and things. Mariners have to live without excess - this begins to filter into religions. Give away all your possessions the Navigator Jesus said and you'll be able to float, gold in pockets = drown. Gold used as technological artefact then you is flyin' bro'.
So all in all a well. I really would read the Fuller stuff as his writing seems to allow for multiple theories. I certainly have not the 'knowledge' qualifications to do more than intuit and play [ worthy in themselves].
These sources made it easy to accept your Maritime leanings.
His SYNERGETICS which is on the web, both Volumes 1 and 2 , will , if nothing else exercise the mind.
Also THE GRUNCH OF GIANTS and OPERATING SPACESHIP EARTH are downloadable.
Look forward to the Shrewsbury thang
All the best

Back in school, I was in a small design club (three of us) that called ourselves the Friends of Bucky. We were quite taken with his Dimaxion "machines for living". He's the one who pointed out how silly and inefficient it was for an automobile to have a replica of the Parthenon on its prow, like Rolls-Royce. That's when I realized how important symbolism is to the human race, and how poorly it serves us most of the time. If we built houses and cities in the spirit of Bucky - as machines for living - not as temples to our egos or our gods - I suspect everyone on this planet could live safely and comfortably, including all the wild things.

Fuller also claimed that the world was secretly run by pirates! Apparently he was right.