Watch, its worth it.
http://www.youtube.com/watch?v=0nHOjeD2DRI 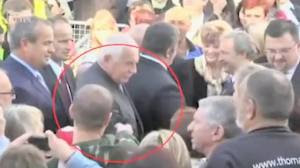 Probably the most perfect shooting of a head of state ever. As the 'lonegunman' didn't use a real gun President Klaus is still alive to commit to dialogue.

The man's reasons for shooting the President was that government is deaf and blind to the electorate.

After the shooting he walked off , did a quick TV interview, and went off somewhere else. The police picked him up an hour or so late, and will probably charge him with a minor public order offence.

Watch the vid for the unreaction of presidential security, who nearly , but not quite , raised an eyebrow. One even moves in the vague direction from whence the shots were fired.

Had this happened in US or UK, to name but a couple of states, I imagine he may have been shot, at least taken down and immobilised. Charges , I would assume, would be on the order of 'terrorism' or some other shrill , sledgehammer-cracking-nut charge, and then at least 7 years banged up, maybe.

Though, perhaps, in many of those countries the use of a harmless 'Airsoft' gun and ammo would be less likely.

Its interesting to live in a country where one may, of an afternoon, shoot the Head of State and stroll off, to be lightly arrested some time later, wondering , perhaps, if you had made your point.