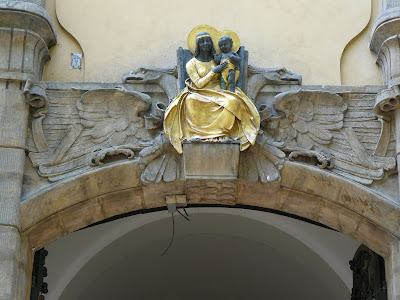 Returning from BTB I carried with me thoughts of Albion [ see comments] and Madonnas. Yesterday I took the photo of the Black Madonna and child standing on the corner of the Cubist House in Prague.
The comments speak about the 5 Madonnas that may get built in Brighton. Brighton is not to far from the home of the Royal Navy [ as in 'not the British Navy'] which is Portsmouth, a town of vast importance in the growth of the British Empire. As spaceships and space travel had perhaps not been discovered I propose Portsmouth as a Maritime Watergate , the predecessor to Stargate tech [ as is all Maritime beesness]. This is reiterated in the Portsmouth FC club badge [ which is reproduced without permission somewhere]
Many years ago Brighton and Hove ALBION FC were live on the radio and a listener rang in to complain about the chanting of Seig Heil throughout the match. David Mellor [ former minister and then BBC Radio 5 live ] took a call from Brighton supporter who said that they were chanting 'Seagulls', the nickname of the club.
Posted by aferrismoon at 8:14 AM