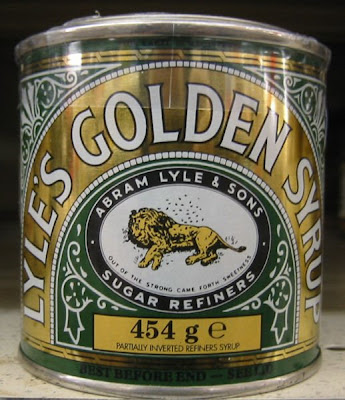 DBVRH 217 , the name means 'bee' , the name of the 4th and only female Israelite Judge. The Bees in the Samson and the Lion story are spelt DBRYM and translated 'bees'. Nevertheless in the Hebrew dictionary 'bee' = DBVR and DBR = words. Do 'words' come out of the Lion?
Bees as goddesseis is well documented. In Greek mythology there's a story of bees being born out of an oxhide [ bugonia.
Abraham Lyle [AL] and Charles Tate [ of Tate gallery fame] started the T&L sugar company and their tins of Golden Syrup bear the illustration of the bees emerging from the lion
Bees born renewed and in full honey production from a lion, but no mention of a hive. Words emerging from the strength of a lion , willful and unhindered by the hive-mind. Samson = a loner - Samson's unsolveable riddle emerges from this episode ending in the death of 30 Philistines - 30 = L = Atu VIII - Adjustment
ShMShVN holds within ShMSh - Sun , and PhLSh within PhLShThYM means 'flash' The midday sun , Horus, consuming his enemies. The sun consumes its weaker morning flickers and flashes coming into full midday bloom. A time of drought.
Samson rents the lion's jaw in two - the Strength card in Rider Waite has perhaps a female version of this act.
Melissa - bee in Greek
A Wuzzle [ thanks Disney] called a Bumblelion exists
Leicester City Football Club are nicknamed the Foxes . Madeleine McCann also comes from Leicester. May she return home if she so wills
And the Bees are the nickname of Brentford Football Club who moved to their Griffin Park ground in 1904 when AlCrowley wrote the 'Book of the Law'. DBVR can mean Hornets, so pushing the envelope I bring you Watford Football Club, renewed by Sir Elton John,they won the FA Cup helped by his investment.
Football team emblems are a mine of symbolism ; check Portsmouth Football Club for StarGate synchronicity [ PORT'S MOUTH!]
Posted by aferrismoon at 9:10 AM

Man this is good stuff...It's gonna take me a few days over the weekend to write up my findings (and your's...much of it is from you).

I need to process what you have written here...work is kicking me.

HaHa I got it, i visited TTLG 1st.
Rayshun and ShMShVN - well the ShVN sounds the same and I guess a Ray is alittle sunny. ShMSh = sun.
Caught the vid-clip too. A modest man.
Well none of this stuff would have been here were it not for all the people , but I guess you know that.
Ther's a King Dox, a Fox-King from 'The road to Oz' and a psychotic Renard the Anarchist from ' the World is not Enough' - James bond film. He has some terminal problem but as he approache dath he gets stronger, bit like the 'rabid fox'
All the best