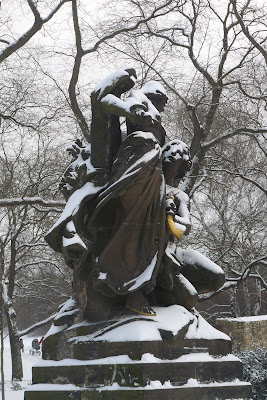 I took this a couple of weeks ago, its by MYSELBEK though I don't have the title - but Slavic lore doubtless. 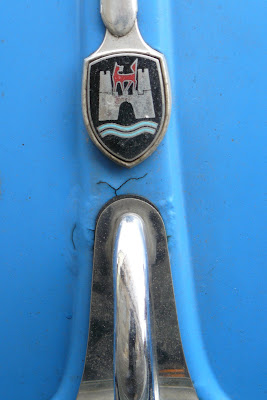 Met an old VW and it sported this Fox-castle-Wave logo. Searched the net for it in vain . Nevertheless try the BLOB's ' I Heart Pillarmids' for a vaguely recent visi-synch. Of course Samson dealt with 300 Foxes and stood between 2 Pillarmids pre their destruction by him. Anyhow certainly H-like with a red thing high and proud. In fact the whole thing's Island of Manhattumish, the headlight's and the wing mirrors resionate the candles on the rock in the ocean on the planet in the Solarge System wiv da You-nique verse finding synchromystic blessings in every bloody curse 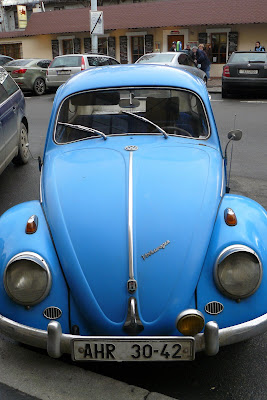 Achtung Freundlings, Logo = The Coat of Arms of WOLFSBURG, the factory that first started spewing out Strength through Joy. I assume the wee red beastie to be a wolfie, or the SET beast from da 'gyptian
+ The Beetle = KHEPERA who helps bring the Sun through the Night and gets called TUM when it finally does the horizon-tumour dance at Dawn - primeval mounding. + this beetle's BLUE and I've heard that's the Sun's real colour at pres. ORANGE = Blue's complement and gets GABRIEL's attention. All Water under the Bridge as the Townspeople of Wolfsburg are apt to say.
Posted by aferrismoon at 6:23 AM

Car logos are always ripe for occult picking. Especially VW, can't get much closer to the Illuminati zeitgeist than the folk's wagon.

The fox has taken the castle, after swimming the moat/river/Atlantic? VW were the first "Nazi" car made acceptable to the post war American masses, mostly due do its "counter-culture" cool. Interestingly, the VW bug was famous for floating. The VW Fox was sold in the early 80's, and I think was eventually made in Mexico, so foxes all around.

Just doing a bit more checking and it seems a British guy called Major Ivan Hirst reopened the factoru in Wolfsburg and almost singlehandedly....... etc etc.
This car must have been made at the Wolfsburg factory, I'm assured.
The Love Bug - Herbie , comes to mind. The 1963 JFK Assassination Memorial VW.
I guess this might have been one of the first 'small' europeein' cars to insult the American dream