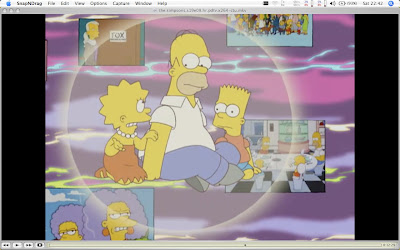 As Homer travels in a sphere through his memories I caught sight of this chequered dining room scene, though it all looks far more modern , almost spacey, than their tawdry earth-bound domestile. I include as I could and its here for the record. Today though we find both inner and outer space tainted by chequerboard imagery, as well as speedy transport systems. 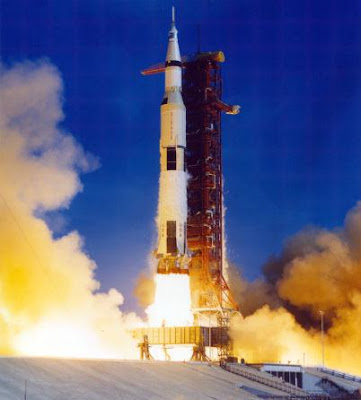 While not wholly checked the Saturn V displays a modicum of b&w, though if u check the Saturn Sa-5 the design is more obvious and integrail. 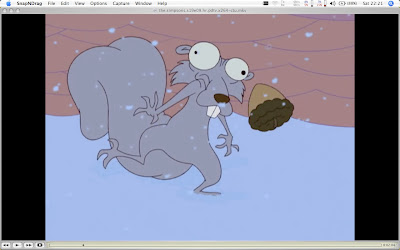 This is one of the synchs that I've decided the Simpsons has 'lifted' from the Synchropages. Here the Ice Age Squirrel sports the ACORN which gets a mention in Jake's stuff on Chicken Little. Here the Squirrel looks stunned as Willie has just bashed it on the head for 'stealing his breakfast'. Though what are little acorns but little nuggets of truth. In a desperate attempt to leech fame from The Simpsons I propose that Willie is the Simpsons who are having theor ground encroached upon by Synchromystic Bloggins, nibbling at MG et al's plots and jokes, synchs and funnies . Willie bats the luckless thief over the horizon to be immediately attacked by a score of hidden squirrels. The Acorn also looks like the LUNAR LANDER 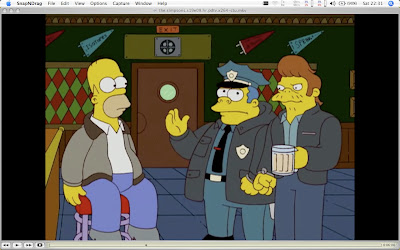 In Moes Masonic Lodge , Newspaceman comments that its boarded up and men -members only like many Lodges in the UK, I noticed these portholes and bullseyes. The Porthole in the door seems to be directly opposite the bullseye on the wall. Homer also puts his hand on the porthole to open the door on leaving 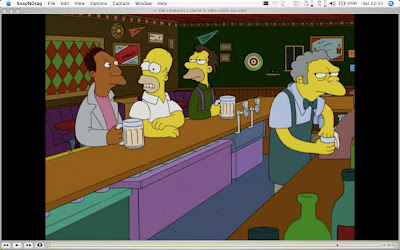 To finish off Newspacemans Masonic Lodge remarks take on a new turn when we see the Lawman and the Criminal in the same bar together as 'more or less' equals. The Pennants are they really so prevalent in the US? Well they look like rockets or extended capstones. As below , one says CAP IT AL[L]
Posted by aferrismoon at 8:21 AM

Homer, cross-legged in the bubble spaceship like Hugh Jackman in The Fountain. The checkered floor is from the Treehouse of Horror XII episode, "House of Whacks." The ultrabot computer-controlled house, voiced by Pierce Brosnan (Remington Steele) tries to kill Homer when he falls in love with Marge. The house's artificial intelligence speaks through HAL-9000 type red-eye camera/speakers. The 'purple-haze' in that picture remind me of the episode where Homer smokes medical marijauna.

I gotta see this episode/s. What's it called? Imma try an find it right now...

Eternal Moonshine of the Simpson Mind, it aired on Dec 16 2007. Cheers for the extra info. The Purple Haze I'm wondering, there's a lot of purple in the Simpson's , one episode it related to AMBIEN , or one of these 'new drugs' , ostensibly for sleeping, but in fact carry u a way to Oz or perhaps Nozia.. I haven't seen the medi-marijuana one.