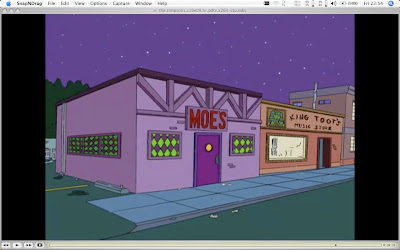 Moe's place surmounted with runic symbols, or possibly Ms or Ws or peaks with pillars amid. A Jewish? bar-owner sitting within Nordic symbology. His Masonic Chequered windows doubles his 'imprisonment' within others cultural motifs. On the other hand it shows the plurality and 'con-fusion' of symbols gracing the US. Next door an older symbology has transformed itself - King Toot's Music Store. Notice the door is open - Toot and Come In, a word-play found in Joyce's Finnegans Wake denoting Tutankhamun. The past is open to all, the present is the closed conspiracy of Moes Bar. In this episode Moe shows us how to make the Forget-Me-Shot, a memory deleting drink. 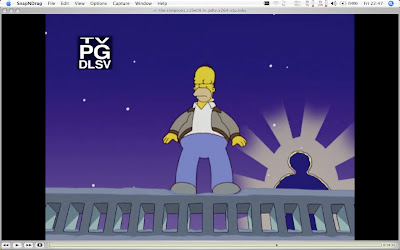 Homer's Suicide , jumping from a bridge is interrupted by a presence. In Centre of the Cyclone John C. Lilly writes in the depths of his LSD experiment:
' If they came any closer , they would overwhelm me, and I would further lose myself as a cognitive entity, merging with them. They further say [ the 2 guides] that I seperated them into 2, because that is my way of perceiving them, but that in reality they are one in the space in which I found myself.They say that I insist on still being an individual , forcing a projection onto them, as if they were 2...' 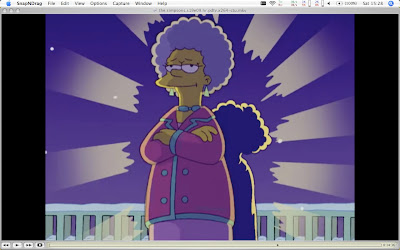 As Homer moves away from the point of death he immediately perceives the TWINS, and he still perceives the Sisters dislike for him. They move forward and push Homer off the bridge to die again, to understand himself, well I'll let John lilly explain it from his 'experience':
' I sat in the space without a body..........Slowly but surely the 2 Guides came towards me.. their thinking, their feeling was pouring into me...they communicated , in effect, " We will not appraoch any closer as this seems to be your limit .... U have x number of years left to inhabit this body....If u wish to stay here now, u may.....if u go back to your body it will mean a struggle to get through the large amount of hindrances u carry with u. U still have some evasions to explore before u can progress to the level at which u are existing at the moment. However it is advisable that u achieve this through your own efforts while still in the body so that u can exist both here and in the body simultaneously. Your trips out here are evasions of your trip on the planet looked at in one way. When looked at in another way, u r learning and your ability to come here shows that u have progressed far along this path.
Your next assignment , if u wish it, is to achieve this through your own efforts plus the help of others."
They gave me a very large amount of additional information but on this information they placed a seal. They said I would forget it when I came back into the body until such time as this information was needed. Then it would be there and I would use it, 'remembering' what they had put into me'
Posted by aferrismoon at 7:16 AM

Funny aferrismoon, I recall my first trip as being as much: insofar as what I learned, I would remember when needed.

What I did remember, instantaneously, was that everything I thought "mattered", did not any more, if in fact it ever had.

Cheers for the insight. I remember after my first trip I was quite surprised to have 'come back', hadn't freaked out, and there was an incredible universe to play with.
Excellent - The Boarded up Lodges, of course