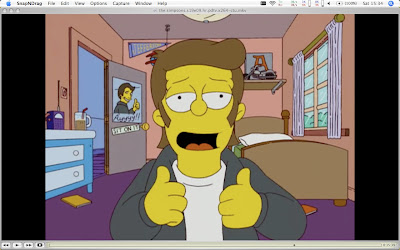 The pennant changes to JEFFERSON and where the yellow sub lay we see a Capital A, capstone-missing design, Below sits a B-ike and the AB symbolism gets repeated [ AB [3]in Hebrew = Father], The Chest-of-drawers still keeps its duality , information imported via the radio, and drinks/potions imported via a cup or glass of something. The CND symbol turns to the Fonz and underneath we read SIT ON IT which may be what u do with a capstone-less pyramid. Couple of books on the floor, double-horned gesturing with his hands 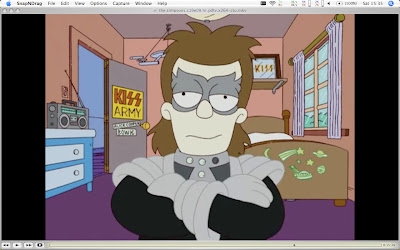 KISS gives us the SS Runic symbol and the I with the first S makes a strange looking K. There's a certain singlemindedness about H in this pic. Alice Cooper and Bowie stickers on the door get placed to make an ABC while the duality trip has gone 2 in 1 with the ghetto-blaster filling the surface. The USS Enterprise takes the place of those college flags, and a Kiss mirror balances on the shelf for the A. Homer crosses himself in the Osiris Crucified position that appears within a certain Hexagram ritual. The collar has 3 white studs and one black and Homer is masked, a la Superhero/Alter Egoist, giving him an Owl-like and Stoic expression. 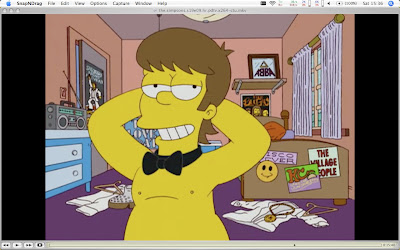 When John lilly spent hours tripping in his isolation tank the most comfortable position was with his hands behind his head supporting it while he lay in a salt-water medium, obviously without clothes. Here Homer still in his 'falling trip' is positioned similarly. As in the tank, its dark and the 'doors' to the outside world are closed. Dancing, which raises energy and releases us from our 'vie ordinaire' has becomes Homer/s mode of expression.He now wears a bow-tie or butterfly-tie [ as they call it in Czech], an angel gets its wings, Ritual 'disco' clothing now litters the floor and band-names replace the stars and planets from his Kiss-age bed ; The Village People, KC and the Sunshine Band, Saturday Night Fever, Disco Fever [ Disc of Eve-r] ,on the door, a partial poster from 'Love Boat' [ do not watch it at any cost, its full of synchs but ... don't. Get someone elso to watch it and then tell u]. Above the bed the BeeGees, the Brothers Gibb and then above the capstone now in place, the pinnacle of all disco - ABBA. The father and father reversed supporting the capstone, perhaps the 2 guides have now been fully incorporated and Homer imperfect may go forward. AB = 3 so AB BA = 3 and 3 but when one is reversed to face the other they join to make an 8. Ab is the 11th month of the Hebrew civil year and as such one can place two 11s beneath the capstone. Abba is a title of the 2nd sephira ChKMH [ Hokmah] , often translated Wisdom, and totals 73 which = the bricks of the dollar pyramid + the eye.
Posted by aferrismoon at 8:26 AM

Love this Simpsons material. The S in white on the red jacket is naturally for Springfield of course, chosen as a town name since their are so many cities called Springfield in the US. It occurs to me that a Spring Field would be the locale where an Underground Stream emerges. Fascinating, just another reason to love the Simpsons.

I can't quite decipher what the blue shape on that boat is. I haven't seen this episode. I thought it was perhaps an homage to Matt Groening's Life In Hell character Bongo, the one eared rabbit. A rabbit is as lunar an animal as you can get.

In UK I don't think there is a Springfield town or city but many towns have an area called Springfield. I lived in Shrewsbury and there was one there. Nevertheless this episode did Satellite the town, so we may have a clue as to where it springs from

I have dared to watch Love Boat, and what cracks me up the most is that Murray, the gay acting, bald loser in the world of MTM Mary Tyler Moore (the goddess) winds up captain of the biggest ship in the alternative love universe.

Great Simpsons synch fest. And thanks for the Lilly inspired comments at Gosporn. Have you seen OXO brand "good grips" kitchen products? http://www.oxo.com