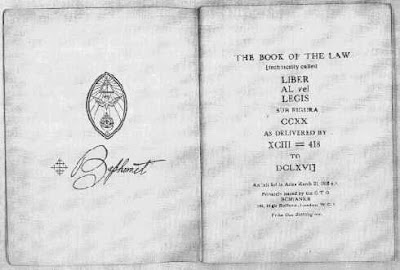 mr.Crowley oft referred to himself as The Beast 666 among various. He brought forth ABRAHADABRA, a magickal formula with the number 418 which also spells ChYTh a word meaning 'fence, or enclosure' , the 8th hebrew character and ruler of the Chariot card. This word with different diacritic marks is translated as 'beasts of the Earth' in Genesis Ch.1 , v24 and 25. In Hebrew ChYTh HARTz . The Hebrew word for 'beast' I have found = ChYH [23] thus ChYTh must be a grammatical change. Nevertheless Mr.Crowley must have known that 418 had that meaning, well-versed as he was, thus it remains somewhat mysterious that 418 = Beast.
Also the idea that ChYH has the meaning 'living' as well. Change beast for living and we have 'The Mark of the Living'.
Many go foe Satan being 666 but that's about the only name that can't be 666ed. STN = 359, way off the mark, and no amount of screwing into the calculator and hitting wierd math symbols gets one any closer. But if Satan were the beast and beast = 418 then 359+418=777. Grammatically ChYTh STN may mean 'beasts of Satan'. Who'll chip them, then?
Another 777 = TYTh MShYCh- 419+358, Serpent-Messiah. TYTh = the 9th letter , means serpent, and is the Strength/Lust card, so we have this dual or duel current, dark-light, beast and whore cyclone with , with the Serpent-Whore-Messiah taming the Satan-Beast-Lion

The Beast from the East , does it have a fleece, does it shine golden. Preferest thou the serpent skinned garden variety. Perhaps sir would care for a mixture, snap of the back legs, attach it..uh.. to the forehaead, the apocalyptic horned. Dagon influence, no worries, grab this here goldfish and a la beastly practice , ram it up the rectum , lo! and behold, a blue star forms in the East... oh , its the police, must dash 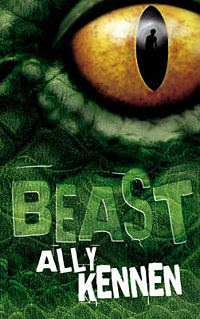 In Chapter 1 verse 5 of Genesis the translation tells us that 'God' made day from light and night from Darkness. Occuring so early in the Book of the Law it perhaps explains an early dawning of the ADM, it's psyche and integrity opening to a relaization of otherness-awareness. The words used for Dark-Light-Day-Night =
ChShK -328,AVR -207,YVM- 56,LYLH -75 which all add to 666, and what can be more revealing than darkness and light dancing their opening duet , The idea of the 2 project outward from us to form day and night, an outer expression of our inner selves.
The word 'darkness' is prefixed by H, translated as 'the' so the word = HChShK=333. This = 666/2 and implies that Light, Day and Night = the complementary 'half' of darkness. 3 IN 1
The word ChShK is used 77 times in Genesis. Actually in the New Testament!! 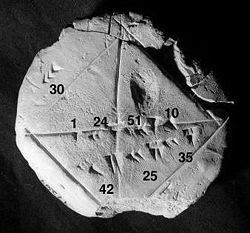 Yes humans can be beastly and none more terrible than the mathematically inclined Babylonians. Their Grand Viziards who 'put the WIZ in wiz-dom [ the Geodesic Dome of the Wizard-Navigator-Mathematicians who wrapped mathematica into their lore, evidently other people's lore aswell. Then deigning to keep the current technology, events, phenomena from the general public they disguise stories and holy books , plays, comics, films in their mental masquerade, all on the surface, all underway.
911x666=606726 - Each tower a 6 , the 72 = the 72 bricks of the dollar-pillarmid, the 0 = the eye.
If 666 stands in the Book of Revelation, and powerful numbers are kept hidden from the general populace, then like the eye in 'The Beast' above, maybe it will prove to be a key of our personal revelation, to walk or meditate or blog our way through the daemons, on , which is why it has such 'revulsion' to many.
Dark-Light-Day-Night = tetrahedra
Posted by aferrismoon at 6:54 AM

I'm starting to suspect that Aleister Crowley is the one who wrote the Bible (somehow).

Perhaps with some type of infernal difference engine coupled with an equally diabolic organ of time voyage.

Amazing as always, and such impressive skills with words and numbers. The Wiz in Wisdom. The pattern of comic book enlightenment is no more clearly presented then in the origin of the original "Shazam" Captain Marvel who appeared in "Whiz Comics". The Wizard Shazam, in a secret cave beneath the subways uses holy lightening to give a young boy the powers of Greco-Roman gods and heroes. Captain Marvel's opposite was the Vulcan-looking Black Adam, an Egyptian whose powers naturally drew from the Egyptian pantheon.

I'm well fascinated by the Alice Pleasance Liddell = APL observations, especially given the information you provide on Eesha, AiSh which one could almost hear embedded in the name Alice. Very intriguing.

Alish, shoundsh intereshting. The Wiz in Wizard came directly from Bucky-Fuller , Synergetics .
ALYSh would = 341 which = AMSh - Air-Water-Fire.
Any how isle just go ask her
Whizz has come to mean 'speedy', Billy Whizz from Dandy or Sparky or Beano comic. Sparky I think.
APL just cracks me up, I can imagine Carroll being stupefied by the synchromysticsm of it all.
Caves in Monutaintops

The numerical value of the English language has very little significance. It is only important when referring to ancient languages such as the Hebrew. This is well documented by Manly P. Hall's infamous secret teachings of all ages.

Cheers Fred
I remain on the fence with this. I don't use it, but in the fullness of synchronicity it exists. But, with Englisg spelling one can alter the spelling to suit which seems to give its elasticity too much slack - no tension.
The hebrew for me links into the energy of universe and thus has a deeper integrity . and its does things with numbers that English can't do - its link with the Torah = direct info whereas English translations = comparative
basically what I'm trying to say is they're chalk and cheese