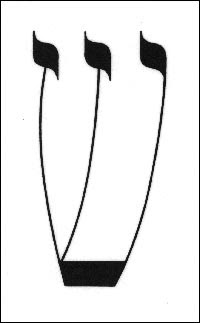 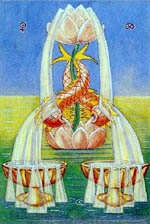 ....from Peering Through. Tod's most recent [ most [ pronounced like 'mossed'] = Czech for Bridge] includes watery , tridental imagery that I re-cognised as the pix above. As well as the stories overlapping wavelike upon the shore which allows us a layering imitative of the textual research [ manifold imago-textual synchronisme dada doodah unity]. As well as the content in all these outputs, there seeps the massage, the way we're doing it. It's often this that I take into the streets, woods i walk in, the films, docus and books that I inhale. It's this that can't be terrorised yet it's open, you, me , I they, can walk in and set out. I assume that the skillful application of this practice will improve, allowing us to take greater control of our exterior reality.
One wonders of the multi-synchro contextualism indulged in by the warrior-politicos, mainline media, and the frytenned. I do amble into their psychic feeders, finding it difficult to digest , the smell of bad eggs. Pleasant to flies , lots and lords of Flies, but once consumed passes through, due to its lack of roots. one feels the superficial, eggshell layer- mal-new-trition....
one must eat, for this the TOOTH proves essential. In Hebrew the letter ShYN 360 means tooth, the molar, thus its tridental appearence. Sh = 300 and has the Tarot attribution JUDGEMENT/AEON . Via Carlo Suares it can represent the great cosmic movement , akin or =ing the Holy Spirit. It represents the element FIRE, and in Tods Trident glyph emerges from 2 fish positioned like the 2 dolphins in the 2 of Cups [ from the Book of Thoth], which he titles LOVE. Cups = Water element, thus a Fire borne of Water, and this Tooth , the whole tooth , nothing butt the Tooth.
The Dirigibles: Zeppo, Blimp,and Graf, Steve Faucet, Ricky B. Ransome [ Swallows and Amazons] all require heat to get them into the air. With Hot -Air balloons, a toothy fire projects into the cuppy airsack. In a simialer way we can use our sperm NRG to create a fire in our Tan T'ien that helps shoot the Wunderleany along our spines, to a know-doubt butterfly-shaped transevolutionary metamorphic gland that no-ones yet discovered physically
We transform our genes, not they us, lest we relinquish that operation. Daily we get bombarded with our determinist genetic programme. The Hebrews use the word GN[53] for both GENE and GARDEN, while Eden they spell ODN[124], DiO-x-y-riboNuclayic, and RYBA in Czech = a FISH.
Posted by aferrismoon at 4:07 AM

You do me such a service by filling in all the fine grainy details...I am MOST impressed and intrigued by your findings. I thank you a million times ova

That tarot card just beamed when I saw that Trident pic.
Did u know that the Royal Navy Submarine Nuke-missile programme is or was called Trident. The other big missile was or is Polaris
Bridge it Bardo

Oh yes. The Trident missile program. Nuke-sub class is Trident...it goes on and on.

I have some NEW Trident stuff sitting in wait...I only hope I don't have to break it out soon.