Gleaned from the BLOB a homely picture of Akhenaton licking his baby. Lately as the planet letters have begun to spin. James Joyce span letters around in FINNEGANS WAKE the E. Akhenaton appears to be sitting atop a rotated K, which, I must confess, for some weeks now, has struck me [ if one can be struck for weeks] as a glyph for pyramid without capstone. Capstone here = Pharoah's fat alien ass. 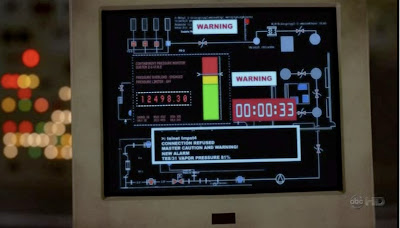 This pyraminnacle of Egyptian man may have had 33 degrees - 33=3x11=KKK [ under certain 'stances]. At present that links to Kathleen'kick'Kennedy as portrayed by RT 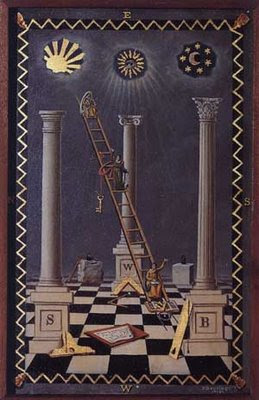 SWB means little to me, perhaps easily findoutable. Here its on one of the Tracing Boards belonging to the Sons of May. So what's it doing outside the cafe with the checker-tablecloths? Small world! 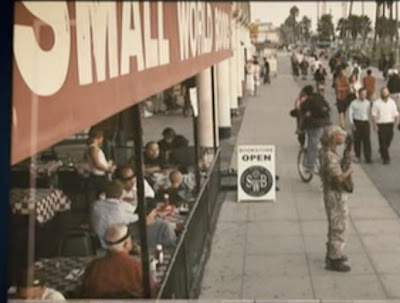 On the right of Miss G. is a pop-art flyagaric mushroom dotted with white lovehearts, on the left a grid on the wall. In the middle SHE must marry the 2, the seeming chaos-flexibility-motion of the mushroom trip balanced by the map-rigidity-restriction-organization of body'living.

Later or earlier she proceeds with her valley-girl crew to a bar, and once in , to the LADIES [ L.A. DIES, or Lady dies] to collect/deposit something in this cube with both ends open. we = her stargate destination. The 2 stills infer a transition from melding 2 currents into a dual current. In fact I like them so much I might turn them into a personal icon, or cult known only to chirping birdsong and riverburble. 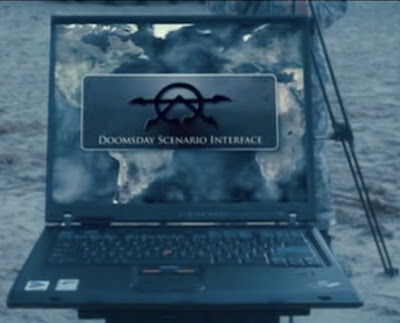 Here a logo that adds irretrievable evidence to the K as uncapped pyramid, trickily rotated by time and human hand. As it happens letters have rotated to present us with our present sets, in fact A used to almost be a K accessing the Ox image as it does back in Feenician days.

Another image more for its slipperiness, the Ferris wheel-Stargate motif, featured in DrWho. The gun directed at the centre [ though not in the film,just picture-apparently. Her 2 arms create a 7.Going back to the image before the triangle shape superimposed over the O implies the same angle , so with the image she has linked, though far earlier in the film, with this moment here. She will be shot soon, standing on the beach. She has projected her own death through a time-portal, she dies , enflamd with love for bOXer 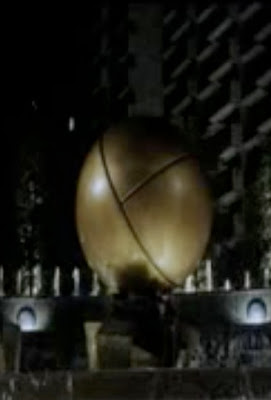 A still from one of BNWOs vids shows the Sphere/Kaaba stone about to leave its perch via explosive device in the film FIGHTCLUB. When it rolls off it does so in the manner of a heavy object, somewhat slower and indirect.

Anyhow what a young , fresh, presidential candidate with his signature on a baseball has to do with masonic-mega-rituals, moslem kaaba stone representations, remains to be scene. 45 = ADM and it'll be 45 years after the JFK ritual tthat someone gets PresIDENTed. The ringing BO has a song to it as far as synchrobrain goes, It = 72 in the 'brew lending it the same number of Bricks as the dollar-pyramid. Disney take much to meld it with OZ[77] and get BOZ[79] , one of the 2 Pillars transliterated from Hebrew into english letters.Acc. to ETEMANANKI the 79th Grand Master of the Knights of Malta [ famed for spelling Night with a K got elected on March 11,looping 79 as JAChYN/BOZ enumerated, the 11 as pillars from the date and a 3 for the month to include any errant middle pillars drifting in paraspace. 311 = AYSh , the 'man' split from Adam in Genesis. GL33 George Lucas confers OB 1 Ken OB, and 'ken' in Scots = KNOW. Well I'm off to thieve Prague Castle's syncrovaluables , tout de sweet dudes. [ In voice of Snake fron Simpsons]
Posted by aferrismoon at 7:00 AM

"Meet the new boss, same as the old boss"

- The Who, won't get fooled again

I stole the idea for title from Psychedelic Furs - president gas id president Gas again.
Fight the presidency to bcome it.