When it comes to the healthy option choose these, other products in the range are Oven-Baked Chips, for bad, naughty , evil types. WAVE in Hebrew = GL, 3+30=33, = Micro33Chips, all far too MaZOnic for my tender diet. 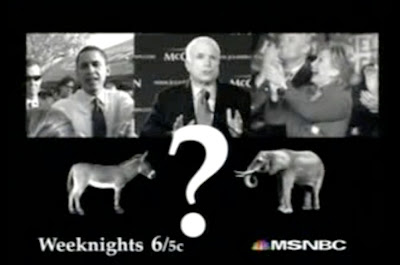 Adam Star has watched RACE FOR THE WHITEHOUSE due to illness. Had he not contracted that virus I would have taken little notice of the prog. Some of the stills therefore from its Youtube outlet. This one clearly shows the Reptilian candidate A Miss Hillephant R. Clintongue.
Mr McCain has what looks like MOO coming out of his head, maybe he's Hathor inthe binary androgyne checker-board tesselation that passes for identity in politics today, maybe he's the Hunchback of Notre Dame as the question mark sort of suggests.Crowley wrote The SOLDIER and the HUNCHBACK, the ! and ?. Apparently they're all related to Bush.
HEADLINE, HEADLINE , David Gregory,[Gregorius Dialogius] beloved of the airwaves,watcher of men, with his searching questions and intimate knowleDGe.........., Dear God. Nevertheless he whizzes us off in search of the new WIZ to take position in the O-Valis Office has he has acquired through birth the hallowed initials DG , Dorothy Gale, our gal in OZ. Numerically the DG = 7 , the OZ = 77. 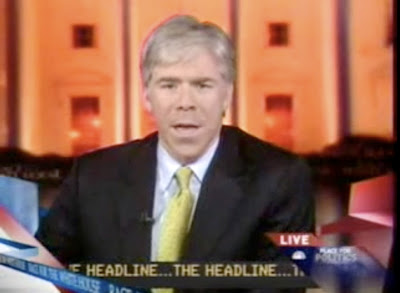 His HEADLINE lies horizontal with the 2 weeny windows and through the 3 windows to a fashionable Orange our eyes take in the implied pillarmids , DGs head mimicing the central altar space of a church.

Considering today's heightened visual awareness and the capacity to find 'hidden' images in everything, except of course hidden things that by the mere act of secrecy can't be seen, but wistfully imagined nonetheless, I feel amazed they let this image of a black and white tie through. Orange , B&W, its all becoming tigerish. The words HATE, RITE, appear out of the melee. 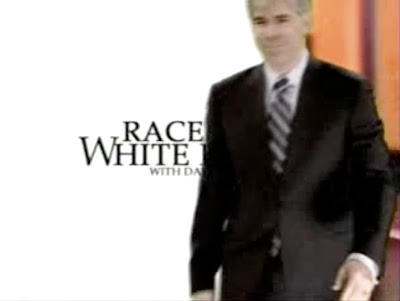 The obligatory obelisk, is that 10 or a 100. Well I wish it were 10 as that would secure a vote for Aten, , there's 7 or 8 stars so it could mean millions...millions of stars. Leastways, unclear, but a blurred obelisk with its constellation, which reminds me, check out STYGIAN PORT's latest starburst of info. 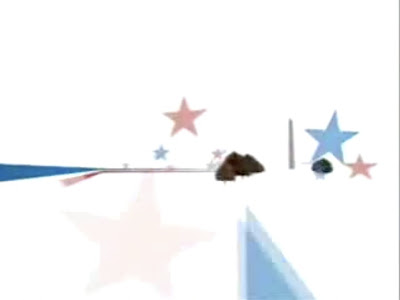 For about point something of a second appears this dark image of woman, after or before there's a dark picture of the LIBERTY MUTUAL logo. More unclearness. 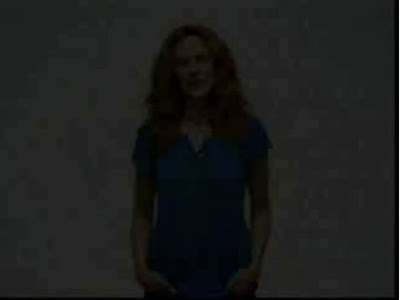 Despite all the imagery that's apparently coming out , that will muddle our minds, symbolize our seratonin to the point we can only dream in logos, however much its practiced in dark, computer-filled NSA hospital-brothels or in plane sight in the voluminous towerblox of ad agencies, we can be sure 'they' can't control everything.
Note the R,W & B pens pointing at SM, initial of SynchroMysticism. Next comes the A, the pillarmountainmid amid followed by RT, the Stargate Queen , Robin Tunney. The stem of the glasses does that 'line on the grid' drawn by Crowley in his Book of the Law, info on which resides at THE BLOB. it marks RK, the initials of Crowley's wife ROSE KELLY at the time the 'book' was received. She took part in the ritual, I think.
SynchroMystic ART TAKES, well I'm quite taken with it at pres. 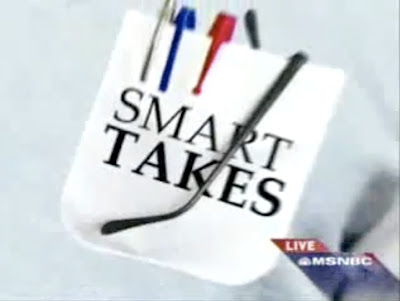 Martin PRINCE, of darkness, relates how the Twin Pillar takedown relates to the Horned God colection of rituals, at least that's what the butterfly told him. Notice his forehead, pyramiding , flanked by his pillaring fingermids, I sense wrongdoing. 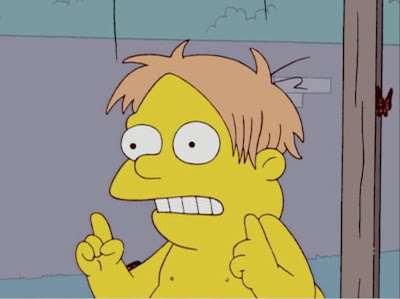 Posted by aferrismoon at 7:24 AM

It was maybe worth being sick for SynchroMystic Art Takes, that was a blast. Now that I see that Hillary is the Republican and McCain represents the questionable Hunchback party this whole thing makes so much more sense. It's funny because I frequently notice David Gregory's own pyramid hair part over his left eye. I believe the shadowy red-head is the last glimpse of a woman wondering why someone as pretty as she is can't find love on e-harmony. That Race White thing is pretty blatant. MSNBC, tell us something we don't know.

MSNBC - More Shit, Now Beyond Control
Cartoon freemasonry seems de rigeur
All mixed in with the Easter Bunny and Freewheeling Freddy Fisher Fielding - the Emperor has lost all his clothes and has taken to dressing up as cartoon characters.
I like the way even the trashiest new progs can be used to supply our own blogs with some humour. I didn't even listen to them, just got their images, and recreated. Their need to advertise complements my need for images to use in 'stories'.
I will recheck DGs hairstyle.
NaZdravi [ to health]

That's funny, I didn't see it until justnow and I'd just read / commented here,

MOO? I always name my computers something to do with that. I just like cows.