John Carpenter [JC] gets a skyload of choppers to fly over a giant crater in AriZOna in the '77 film STARMAN. The nasty, bad choppers attempt to dissuade the Starman from going anywhere and follow the falling-over couple into the crater, shooting at them with their metal fingers and aiming death bomb poopookaka at the fleshy escapees 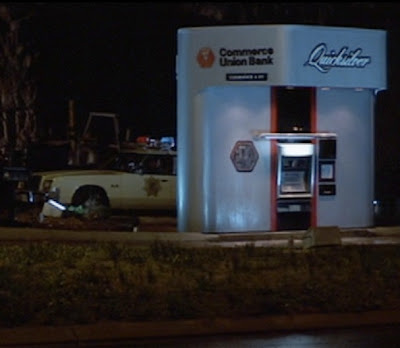 The ATM machines seem to carry symbo-value, at least to my vogelled vision. Here in Starman a polygon despoiled ATM Temple harbour a police car. Quicksilver graces the top, a nice link by Jon Carpenter as the cop-chariot snoops out to chase the unwitting duo AriZOna bound.

Bound for what? Well, Hitting earth's atmosphere, after listening to the dulcet tones of Kurt Waldheim and Jimmy Carter on the Voyager Golden Disc, a starbeing comes to earth
The starbeing is Jeff Bridges [JB] who takes on the look of recently deceased husband of Karen Allen, which at first freaks her out. They get on after a while, as she hasn't slept with anyone in a year though the movie doesn't make this explicit 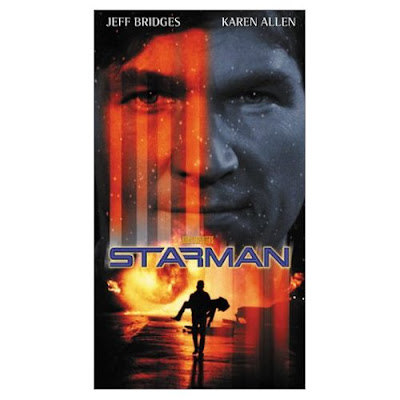 JB has plenty of powers , he has little spheres that pulsate light, bringing beings back to life, but if he don't mek it t' Crater [ Grail] he won't get home and will die. Thus the need for the '77 Ford Mustang Cobra , an orange+black whizzer that gets them near. The last car they use is a Cadillac, probably because they're so common. The Cobra force feeds one 77, as we are reminded by cop radio that the suspects 77 O&B Cobra is speeding along Highway 13 and a half, please pursue, don't touch them. The North Carolina cops try to shoot him as they hate cars like that
Here is the sweetie, parked skewiff, thus showing off its trim lines alt=""id="BLOGGER_PHOTO_ID_5179765247304285906" /> 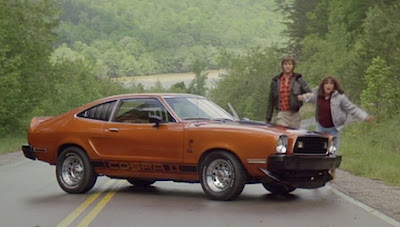 Somewhere in the film Jeff had watched VANISHING POINT and in mimicry of his human hosts slams one of the cars into an oil tanker, sorting out the problem with the roadblock. Luckily he has the spheres of life and he carries his lover out through the flames. Bit of a Daniel rezzer, flouncing through the flames with God on your side, who'd choose to Serve and Protect

The film graces us with one observing us and being drawn to it and perhaps deals our best chance for personal starbursting, gating. Observe a little more, criticize a little less which I shall work at, I need to. The film uses the 77 OZ rezo, and we get driven to AriZOna for the bridgeing ceremony in a meteor or giant 'bomb' crater. The word 'grail' comes from the word 'crater' which ritually opens up to planetary entity types proffering pinky-red beams. I wonder if JC tried to work off Valisian influences when making this. JB brings in the 2 pillars while Kate Allen links to Flash's surname, Kate Austin as mysterious child-bearer [ in this film JB seeds her] and KA as the Egyptian soul [ Ithink its the soul'
Posted by aferrismoon at 3:11 AM

I've been to that crater in Arizona. Pretty stunning view, and they have like a little NASA museum connected to it.

Often I have reservations about visiting the US but sites like this make it really attractive. I have a 1/2 brother who now lives in White Plains so things look easier. Definite SynchroTours material.

You should come! As screwy as it can be, there are so many bizarre and wonderful things to see.

You are always welcome in Athens, Georgia. The Georgia Guidestones are just down the road.

Well the Korun to the Dollar makes it attractive and i have my chipped passport now. Cheers

Yes indeed. I have been planning a trip to Jolly Old Albion to visit David and Ben but I'd take a beating on the dollar once I got over there...still going at some point just trying to keep saving my Templar Notes (while they continue to slip away)

The observation that Grail means Crater, making the latter a sly symbol of the former, is profound and truly a gift, one which I have immediate use for. Thank you. If one is to think of all the important craters from film alone, such as the location on the moon of the monolith in 2001, the crater-like Devil's Tower from Close Encounters, or even in a work like Joe Versus the Volcano. Taken a step further, if Grails are Craters, and Volcanoes are Craters, and Cyclops are Volcanoes, all great, with the Eye and the Grail one and the same through some symbolic sleight-of-hand.

yes, agreed. Crater = cup. We have in our very own backyard Crater Lake - a cup within a cup within... fractals anyone? I'll be visiting ground zero next week - the first time for me. Feels sorta like a pilgrimage.

Yeah this greek 'mixing bowl' -'flat dish' seems to suggest both.
Grails also seem quite Taoist in that they allow water to find the lowest place, who knows maybe something of a religious nature in there.
The pit of the eye, makes one revisit skulls.
Have a good trip to Ground 0, West to East