All Lost Aboard the OZ-ARK with Dotty's Checkerboard Champagne 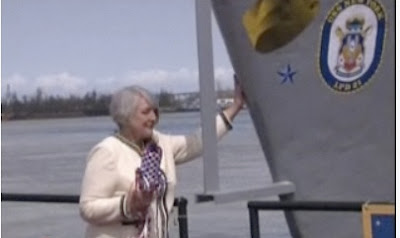 Here we see the USS New York about to be 'christened' with a checkerboard champagne bottle. The Appointed One for this particular ritual is Dotty England. Dotty has the meaning of ' a little bit mad', strange hobbies, odd conversation and the like. It's also short for Dorothy, traveller to OZ and advisor to Wizards. The USS NY has been partially constructed from the magickal metal that once held the Twin Towers, so we now have Dorothy , dressed in B&W, breaking open a checkerboard design on the bow of this vessel now christened New York/ OZ, so great they named it twice, made from the fabled metal whisked off so efficiently after the OZ/PAN 911 Megadotritual. Was it sold to the Navy, or donated by the Metals Market , bombarded with time-displacement Chromo-Uranium molecules. 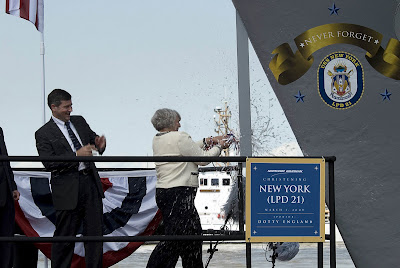 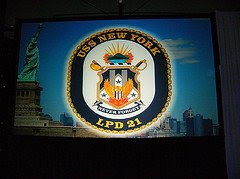 The timing couldn't be better as in LOST, the series finds Des flipping through time, and possibly the ship they,ve now reached is in another time, Des rings Penny 8 years after telling her ,from the ship .The PhilaDelphia Experiment resonates both LOST and the USSynchroship NYOZ.
The Logo - pyramid rising in the background prefaced by 2 Towers between which flames the Phoenix bearing a striped shield, either side of the red stripe are 2 'things' that I can't make out. Above a diademmed mountain invokes a new dawn.
Posted by aferrismoon at 5:19 AM

this is fasinating..thanks for posting.

"The individual is handicapped by coming face-to-face with a conspiracy so monstrous he cannot believe it exists. The American mind simply has not come to a realization of the evil which has been introduced into our midst. It rejects even the assumption that human creatures could espouse a philosophy which must ultimately destroy all that is good and decent."
J. Edgar Hoover, The Elks Magazine (August 1956)

Thanks for writing this post I am a little late finding! Jake gave it a mention today, and I almost fell out of my chair realizing-- I live in the OZ-ARK(s)! Cheers!

There's a belgian singer named Ozark Henry, will have to analyze his lyrics now... :p