Octopi with an eye for the sky 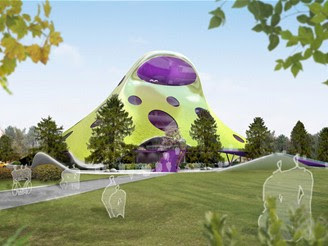 A controversy has grown in Praha around the location for the forthcoming National Library. A competition was held and the winning design by Czech exile Kaplicky loomed into public view. The President decided that it couldn't be located where it was going to be, and then lots of people agreed, and now the argument rages throughout the media.
It has the name Chobotnice [ Khobotneetsay] which means Octopus. Aha, mr Alan moore and your strange tentacled psychic creature from the famed Watchmen bookette, I thought. The psychic fallout has not proved to have reached the world-unifying scale apparently needed to fulfil Moore's prophecy, but thn it hasn't been built.
And when we have built the first , then we will build more , and use special bee-propelled VTOL flight, and fly , fly , into your towns and cities causing planning problems and architectural dystopia, and then........ and more......then.more..fly my little ones.... bzzzzzzzzzzz
Posted by aferrismoon at 7:21 AM

It that a prospective computer generated image or has it already been built?

Not yet built yes? But fascinating. The Architectural Octopus and a library no less. The Kracken of the Deep, and common descriptor of an 'Illuminati'/NWO super-secret society. And the all-important H.P.Lovecraft, all of which interplays in the Ozymandius plot in "Watchmen". Wicked.

No, not yet HP, oh I just thought- HP Lovecraft.
The library will take over from the one where the Giga - Codex is on show, the Devils dictionary.
Hi Adam, well its present possible location is too disruptive of the Prague Castle skyline for many.
But undoubtably a Synchromystic building extraordinaire