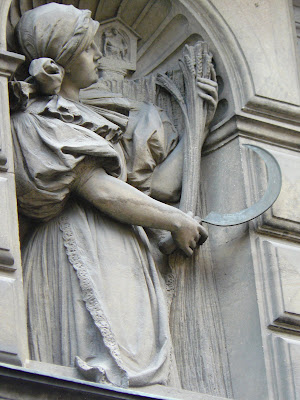 Month 8 - August in the English. In the Czech [ I'm sure I've written some on this before] its written SRPEN [ Sir-pen] which derives from the word SRP - as sickle.
Since living in Prague I have yet to see a picture or a sculpture/statue featuring a male with a SICKLE. They seem to be held by a young girl. [ Check article - Ahoy me heartease, the young girl holds the sickle]. Thus I imagine that the Sickle is held by the Virgin. The Virgin then stands for MATURITY rather than some coy girl, innocent tousle-haired lad awaiting to get it on. This allows me to regain the journey of innocence to maturity at all times instead of wondering what the hell happened when I first 'had sex'. Here the penetration represents Universe informing and the sickle the time to harvest, weigh it up and reorientate acc. to the store of NRG I have to GO 4ward.
This also forces me to reappraise the virginal quality of Mary. Perpetually in a state of revealing a harvest, mature enough to accept the LORDs visit and bring forth a new aeon. Mary as dynamic, thoughtful, focussed and ready to act not some permanently half-sad , fragile, icon-lie.
As August - Srpen belongs mostly to LEO an allegory ensues. The VIRGIN controls the LION. At the right time the vigorous corn will mature though it declines ever to cut itself down. We need to let it get to the peak of nutritious value before we HARVEST.
A linking occurs - The vigorous , golden corn - LEO, we harvest at its MATURITY and then WEIGH our crop. Get a bit stuck at Scorpio.
This sickle reminds me of the glyph for Leo, which has very serpentlike qualities.
I wonder anew at the Crop-circles, a new harvest now that we appraoch maturity.
Posted by aferrismoon at 7:40 AM