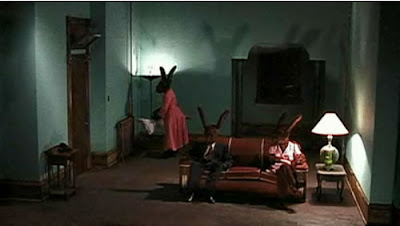 In the previous article , despite protestations from the script , I find it hard not to hear
'Holy Shit, 9 11 fucking down' from Lula [ Peanut] the character played by Laura Dern in David Lynch's Wild@Heart.
16 years later Lynch's Inland Empire has Laura Dern playing Nikki Grace who opens the door to Room 47 wherein live a suburban Rabbit family.
47 stories hath WTC Building 7, and 47 = the number of columns holding intact the respective Twin Towers. The title Inland Empire, the girl disappearing into the rabbit hole-home, the reverse Tarot effect of DL and LD [ David Lynch and Laura Dern]
LD converted into numbers gives L=30, D = 4 and thus 34 which happens to = BBL [ Babel or as hebrews say Bevel] and quite obviously a Tower. Thus DL&LD = Twin Towers, and 2x34 = 68
1968 = the year that initiated the present attempt by the NWO at world domination.
The rabbit=ear shadow against the back wall = the 1st and 4th finger salute so prized by the NWO ackackolights
Posted by aferrismoon at 8:50 AM

this one is on my list of movies to see when it comes out on video. I love David Lynch

If you were to peg anyone as chanelling poetic truth, David Lynch would be a fair choice.

Sorry, should be an equals, not a plus.

NEW: Cheers for that . it all makes sense now.
Thanx DAVID. I never 'like' Lynch's films but they leave enough space for me to join in with the story. Often films are linear stories where it all adds up

I think Lynch’s films unwittingly provide an interesting depiction of how our problem of perceiving Hypertime creates apparent synchronicity spirals and other effects. We try to occupy the spaces in the story, to unravel the puzzle, whether Lynch story or the echoing back in time of a future event.

i think Lynch is the only brilliant filmmaker working today..."Inland Empire" is over the top exceptional. Lynch has insights (as do we. and I would agree with David's comments above. He is a 911 skeptic BTW, if you haven't seen the short video of him discussing it, check it out