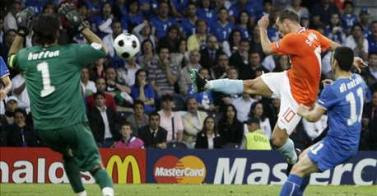 Further to my last post the whole Holland-Orange-Boom thang's warped into EuroDrive.
This goal by Wesley Snejders has been hailed as the greatest Dutch goal of all time, and they have scored some real beauts.
In Fact it proved such a wondergoal that the Italians made a statement that they wouldn't complain.
Still synchromystically speaking the shot was a VOLLEY, and like a cannon-shot goes BOOM. BOOM = TREE in Dutch and the Orange Army scored 3 , or Tree if you's live aroun' Doublin'. [ see the last post for a dutch beer called ORANJEBOOM]

I do apologise for threatening your peace with the M-M from MickDonalds and Monstercard on the ad-boards, but u know the 'lumies, they'll skank off anyone's talent. McDonald's goal of the month or some other vulgar vampiric poison.
Anyhow what the freaks MOOM, a new 'spell'. Doubtless they'll [ as in they , them those]introduce MOOM as a new triffid word that people just won't be able to stop saying - MOOM , they shrieked, or perhaps bellowed - MOOM, and then they laughed, and jumped off a cliff.
Hold on! The MacD's M is an inverted B , aaaaaaaaaaaaaaaaaaah
MAStercard mcdONaldS - don't eat their 3rd degree burghers!

Now the Italians need only get beat by the ROMANians and the Championship will have got off to a fine start.
Italy and France = big cheats, and cheated they're way to the last World Cup Final by crying and blubbing, spending most of the game falling over or pleading for someone's immediate death with arm's outstretched. The Portuguese at least have talent, though equally worthy cheats.
I imagine the Russians to do quite well as they've bribed every country with guaranteed oil supplies, they're only problem is that they're foot-shooters [ see Scotland], which means they're doing really well than they do something magnificently stupid [ as in Scotland beat France twice in qualifiers but lost to Georgia and thus missed out on what was a definite place, and of course the classic from 1978 - Lose to PERU , draw with IRAN , beat HOLLAND [ after going a goal down]. 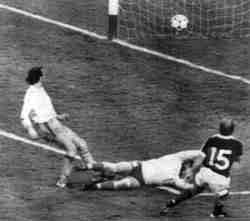 Why do we have these competitions - to give businessmen and politicians a focus for conversation, otherwise we'd have nothing in common and would still be marauding each other a la 15th century.

Football - serious consciousness entraining eVent, except in the US, who actually think they're watching an historical docu. They predict about 2 billion viewers over the next 3 weeks, our/their minds shrunk into a 90 minute timeslot, wound up to fuck and then let off the leash - deliriously happy, suicidal or confusingly bored
Aaaah - The Beautiful game 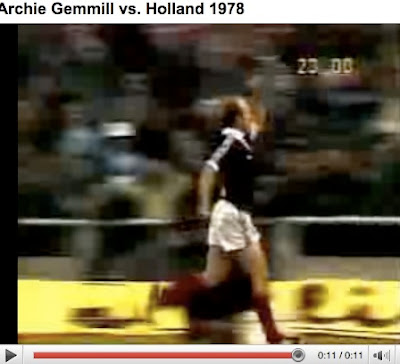 Archie's Jihad
Posted by aferrismoon at 7:00 AM

In accordance to you and WWW, ORANGE = ENERGY

What does Matt Damon say in 'Dogma' again?

"Mass genocide is the most exhausting activity one can engage in, outside of soccer."

You've shot yourself in the foot aferrismoon, the greatest ever goal in the world clip is not playing.

Funny, that goal was in the papers at the weekend, I cant remember exactly why, a supporter is set to commemorate it in some way. I shall try to find it.

Aaah NEWS, it was but a screenshot, but there's loads on Youtube

Did you notice the HUGE INVERTED PENTAGON on their jerseys, I'm sure it has nothing to do with their success (which all started with an offside goal!).

I have to admit that 3-1 goal against france a few minutes ago just after the french made it 2-1 was freaking awesome :p

Oh apparently the status of the offside goal is much debatable, the last I heard was a belgian international referee claiming that it was definitely offside, but who cares ;p Sorry had to rectify a little.

I posted a pic of the pentagon on dedroidify.