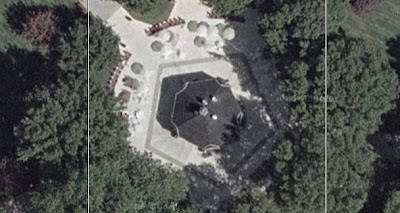 In the grounds of the Pentagon another smaller pentagon-contained building - the Ground Zero Cafe. One wonders if this could/should/may have been the actual target. The rather large building we have become accustomed to , and perhaps the 'terrorists' too.
This cafe , named 'after' the TRINITY - Ground ZerO site in New MeXico, links by name and number. As a Penta it offers the number 5 while Trinity graces us with 3 making 8 when added. The 8 synchs flush with the 9/11 eVent as the forthcoming FREEDOM Tower will have an octogonal base, while the TWINS may be linked with the TRINITY nuke-test and the JFK Sun-King ritual. The Dealey Plaza lay-out synchs with the outer facade design of the Twin Towers [ see post 3 IN 2 1 DON'T G.O.], a 3 pronged-fork or stylised TREE [ cheers Michael-Gosporn].
1945 to 2001 = 56 years , which = 8x7, but then 1945 - 2012 = 67 which via Hebrew number/letters = ZYN , the Sword and the Hebrew Letter corresponding with the TWINS Tarot card.
Below the TRINITY Site base commander Captain Harold BUSH, just showing a good name goes a long way. Mounted on his footless horse HONESTY [ the plant Honesty also has the name LUNARIA], he surveys the base. 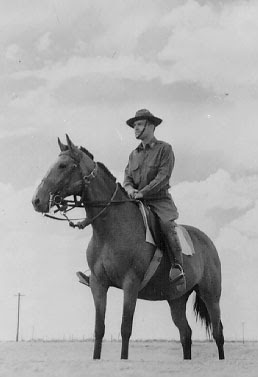 The Ground ZerO OBELISK that triples with the GZ Cafe in the Pentagon grounds and the NY/OZ TT G.Z site. 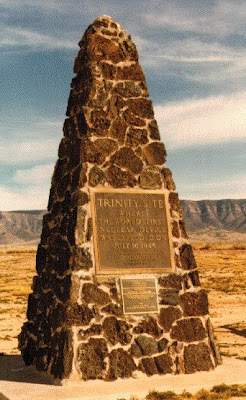 Rooseveldt's administration okayed the Pyramid + Eye design for the $-bill in 1935. Perhaps rather than trying to mind-fuck everyone by Illumalunatic methodology , they had a case of the pre-synching that burns like a wildfire around the 9/11 eVent. Rather like the comic artists whose prefigured TwinTower destruction drawings the designers of the DoLLar BiLL caught a psychic snatch of the aftermath of the TRINITY bomb.
The black bomb-blast crater seems perched atop 2 lines giving an eyeful of pyramid circa. 1945 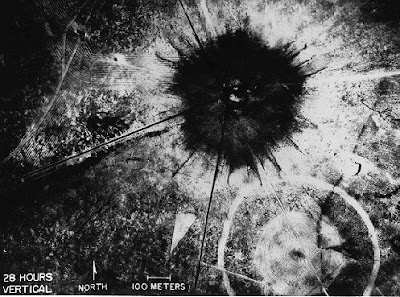 In the pic we see 2 bomb craters, on the right the crater left from a conventional bomb, on the left the leftovers of an Atomically-inspired piece of alchemy. Somewhat resonant with the Moon and Sun eye of the Heavenly Hawk - HORUS as well as simple CHECKERBOARD or the remanants of JACHIN and BOAZ , the Masonic Twin pillars, that lead one to the altar.
This perhaps shows that the ' rich and powerful them-ites' get synched out just like any normal dude or dudette.
DENIS STILLINGS in an essay titled 'MEDITATIONS ON THE ATOM AND TIME' makes this pitch, though to do with Hermann Melvilles MOBY DICK -
" One might well expect such a mighty horror as the Bomb to create anticipatory images in fiction and mythology long before its complete physical realization" - he then quotes from a piece by ROBERT JUNGK -
" While he was reading Moby Dick it struck him that 'only a century after Hermann Melville wrote his great book our own American atomic engineers unwittingly selected almost the very spot [Eniwetock] in the broad Pacific.....where the fictional Pequod was rammed and sunk by White Whale.....Melville has Ahab describe the whale with an image remarkably similar to the conventional symbol of the atom used by artists, " O TREBLY HOOPED AND WELDED HIP OF POWER" "

They practiced exploding plutonium in this massive casing called JUMBO. We see it parked at the POPE SIDINGS prior to it slow journey to TRINITY. Its supported by a special trailer with 64 wheels, and a BECKETT HITCH , a knot, coupled it to the vehicle pulling it.
Beckett resonates with Thomas a'Beckett [ assassinated by Knights loyal to Henry II] and also , for James Shelby Downard rsonates as a possible KING-KILL. Becket was Archbishop of Canterbury and came to earth in 1118, same year the Templars founded. He got offed in 1170 by Knights though I know not if they were Templar - perhaps just medieval gangsters 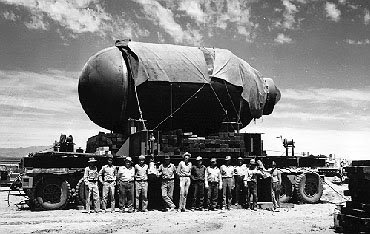 At 5.29.45, JULY 16 , 1945 . The Great Fire God appears. Some have linked it to Yahweh and not inaccurately.
Using the Hebrew letter/numbers -
19 = ChVH [ Eve] while 45 = ADM [ Adam] , so a marriage or divorce of sorts.
45 - 19 = 26 , the general enumeration for YHVH , or Yahweh. YHVH and ChVH have a very close relationship. Thus the 2 parts of the date , the 19 and 45 , reveal Yahweh through a form of Subtraction, forming a dynamic TRINITY.
July - 7 + 16 = 23 , thus , despite all the hullaballoo , emerges ChYH - translated as 'living' [ among other words]
The 23 reiterates with ADM 45 in the exact moment of awakening as 529 = 23x23 , guess that's why they needed accurate stopwatches.
From Stillings essay relating to the desolation of aftermath as found in the bible '...cities that are laid waste shall be desolate 40 years' [ Ezekial 29:9] expresses the 'greening' sentiment -
" Similar imagery appeared in the aftermath of Hiroshima , the bombed-out area was not expected to be habitable for many years. This turned out not to be true. Furthermore , the ground and the seeds in it were stimulated in such a way by the Bomb that an uncannily lush growth of every sort of plant occurred there within a few weeks"
The family imagery increases when we note that the bomb dropped on Hiroshima had the name LITTLE BOY, while the plane that dropped it carried the name ENOLA GAY, the name of the pilot's mother.
Below we see 'OPIE' OPPENHEIMER , brother-in-law of the bomb by all accounts. This pic has him and GEN.LESLIE GROVES showing reporters the site on SEPT.11th 1945. LG = 33 and may stand for LOOKING GLASS. 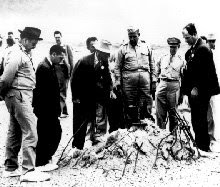 Here we see the start of the JORNADA DEL MUERTO - KERN PLACE, near CRAZY KAT Mtn. It was built by Mason Peter KERN who insisted on employing only TOLTECS to build the damn thing. Peter KERN , while at a Mason's Retirement home, was taking his usual walk along nearby railway tracks when a silent train approached , running him down, a decapitating him.
He meant the gate to represent 'The Gate with a Thousand Doors' or the Gate Of Death.
The Trinity site is in the area called Jornada del Muerto. 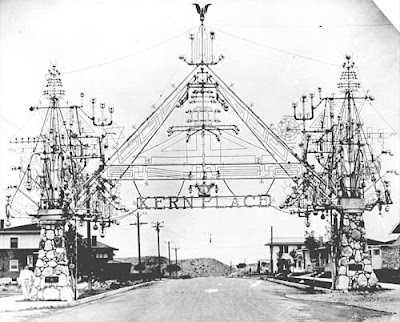 While browsing the wild world of GATES I came across this beauty/thing of horror. The star on the insert has appeared on blogs lately. 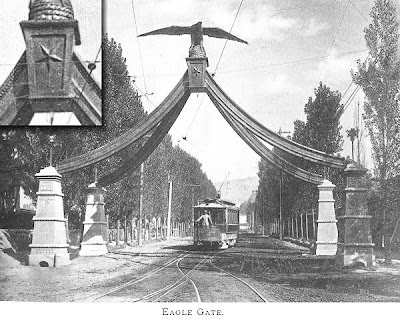 GATES now form themselves into one of the bringers of computers thus internet to a larger population[ but by no means anything like 40% , wild guess, but not everyone has a computer or a screen]. The Gate of 1000 Doors , now dismantled, has exploded into the super-highway of psychic interface.
'Batter my heart , three person'd God; for , you
As yet but knocke, breathe, shine, and seek to mend,
That I may rise , and stand, o'erthrow mee, and bend
Your force, to breake, blowe, burn and make me new.'
JOHN DONNE ; No. XIV of the HOLY SONNETS
Posted by aferrismoon at 5:49 AM

Very cool photos- any relation between Kern and CERN?

Well Chris , or perhaps CK, I have wondered though they call it soft C - like Sern.
Visually its very tempting , and the Journey to Trinity , miniaturized inthe 17-mile diameter Cerne Collider, where they will smash extremely small things a la Trinity seems similar.
Waiting for a 3rd bit of info that might consolidate CERNE-KERN musings - any info flowing your way, flash flood it this way
Photos from TRINITY SITE -www.wsmr.army.mil/pao/TrinitySite/trinst.htm

Nice write up Aferris, another 17 I see in your reply to Chris about Cern...interesting. Guess they aren't supposed to start their tests till August though I thought they had said prior about starting in June..grrr, wish they'd make up their minds!
Nice synchs by the way!

The octagon based Freedom Tower synched with me - the Cross of Sacrifice in many military cemetries also has an 8 sided base.

Plus another synch with craters - Lochnagar Crater created 1916 being the forerunner to the atomic ones to follow. Looked up etymology of crater & found this:-
"1613, from Gk. krater "bowl for mixing wine with water," from kera- "to mix." used in L. for bowl-shaped mouth of a volcano. Applied to features of the Moon since 1860."
AND...this attached itself to the explanation:-
"grail - c.1330, from O.Fr. graal "cup," earlier "flat dish," from M.L. gradalis "a flat dish or shallow vessel," perhaps ult. from L. crater "bowl," from Gk. krater "bowl, especially for mixing wine with water."

Puts the word hol(e)y in a different light.

I see the Secret Sun is on about Ahab as Captain Picard. The obelisk at Trinity is made of rough cut stones, a very ancient Israelite way to mark an act of YHWH.

I've often wondered why the Americans felt it was necessary to wipe out two cities. That Krazy Kern Gate looks like an electrical transformer.