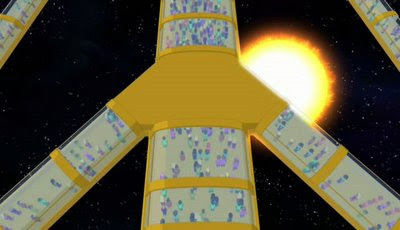 Within a general idea of 'Synchromysticism' the liberal sprinkling of dipples and triples. SYN - United or acting together.
Here we see Synful humans engaging in a vast unifying programme , on their way to shack up with YIVO, the 3 into 1 type deity , resonating Abrahamic Monotheism, and, as pointed out by HIDDEN AGENDAS - Futurama Beastie { part 2], that glides through the recurring symbol bombs activated in the Beast with a Billion backs by Futurama, a title with 2 too many Bees in it, talks a lot about love.
When Filip Fry as Papal [paypal] alter introduces his master he tells the audience to call it, not HIM and/or HER but SHKLIM or SHKLER which parodies the code used by the KKK who prefaced many words with KL. like KLARK KLENT [ originally ARK ENTity]
The pic below [ forgot who I nabbed the pic from] involves the Twin Towers . It shows the facade and a row of 3-fingered Trinity salutes, or stylised runes , the one I looked at says it corresponds to 'Alghiz' meaning ELK and = the sound Z 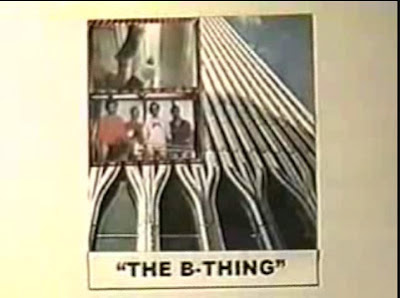 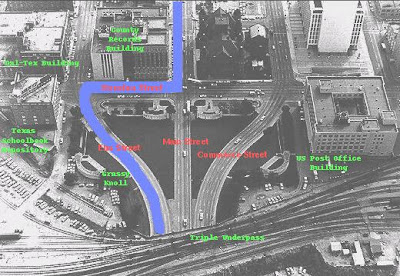 A few years after the assass the built a giant steel effigy of JohnK that actually floats and far more impervious to assassin's bullets. The USS JFK got christened by the ramaining family members. Caroline Kennedy [KK] gives her old man a smack on the bow and everyone laughs, for it is a joyous occasion. Ships are traditionally 'female' so here's 'Big John' as androgyne. The christening happened on May 27, 1967 and it went into service on Sept 7, 1968 [ a sneaky 7/7 as Sept means 7.] Fully decommissioned on Aug 1st 2007 , the spirit of 'Big John' whooshed out and via various agencies entered into Barack Obama.[ Only recently John/Barack [JB - Twin Pillars] got the full welcome treatment from AL GORE. See ELLUMINATI's post - 'Al Gore and OBAMA are brothers from another mother'.
10 days after this 'christening' RFK got shot by Sirhan Sirhan - solo assassin
The ships call sign = NJFK - November Juliet Foxtrot Kilo
As the elections goes from 3-way to 2-way 'race' what will the winners hear, shouting from the gleeful citizens -
'BRAVO , OSCAR!! ' [ as in he deserves one]
Jackie has her hair shaped like an Ezyptian lady.
' How would u like your hair Mrs. Kennedy?'
' Do it like Isis , I've gotta resurrect my husband via spell and incantations, I need to look the part!' 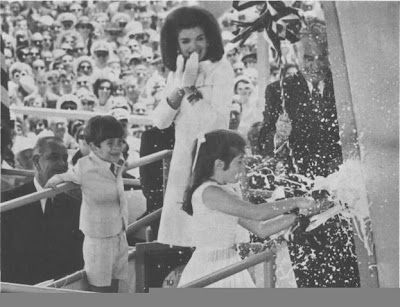 The Kennedy's liquified funds in the US and chunneled them to Egypt to save ABU SIMBEL. The Egyptians bunged a few goodies their way, such as the 'stepping man' below. 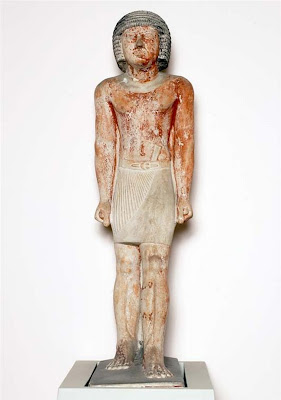 In the Beast with a Billion Backs we go to the wedding of Amy Wong and Kif Kroker [KK]. Kif gets accidently killed and resurrected in this movie and his KK appelation does for King Kill relating to Kennedy who also croaked. Amy , here hairstyled like Jackie above, has the wealth to step into Jackies shoes.
Acc. to James Shelby Downard, author of KING KILL 33, the assassination related to a 'greening' ritual, whence the dead king provides the seeds of regeneration.
The greeness and name Kroaker link Kif to Kermit the Frog, as frogs croak and often sport a greenskin, and they jump 'up' which animistically relates to resurrection. KIF also refers to the 'loose, dried resin glands [ TRIchromes] of cannabis which may accumulate on containers...'. It comes from a Persian word meaning 'bag' , which describes Kif kroker quite completely
Osiris , re-member , glows green 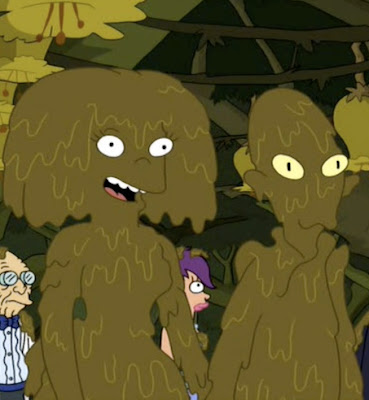 "Full immersion - classic device"
" Wait 'til u see what I've got lined up for Zap"
Posted by aferrismoon at 5:26 AM

Marvellous tie-ins, if your cooking is like your thinking you must make some amazing concoctions.

Your mention of 'Big John' made me think of John Wayne & sure enough the day of the USS JFK christening 27 May 1967 out came a Wayne movie 'The War Wagon'.

nice post. i just seen the new futurama movie, that thing is jammed packed. also during the ceremony the lady twirls an 8 then places he stick on the 3rd eye.

Cheers WW - Wayne and the War Wagon , subime material, willhave to include that soon.
Thanks for the extra info TERRY - it is so jampacked , almost has a multipurpose feel to it.

Nice one mate! Superfluous tie ins indeed! I thought maybe the mud symbolized something, was not sure, but what an AHMAYZING tie in on the Kennedy's! Just WOW!

Thanks for sharing and take whatever screenies you need from my blog for your work to save you time in posting yours!

Someone I know was sure that the twin towers represented the two trees in the garden, with the branching at the bases representing a stylized tree.

Freeways and branches are highways for cells on the move. Like Grand Central Station.

you see those pics of the three into one you have posted.

that feature on the wtc was called trees after the shape in which it forms. They were the main supports for the outer structure that inexplicably fell down on 911.

that shape is also on the actual stargate in sg1 and sg atlantis. it is a very significant symbol and is the reason i came to be interested in the 911 stargate mega ritual hypothesis.

it wasnt anything else that swayed it for me but the very simple correllation between the shape appearing on the stargate and the buildings. it is also the shape of the peace symbol usually encircled and the trident and trident chewing gum seems to have suddenly got a huge addvertising boost recently.

tiger woods or the eastern pillars recently beat lee West-woods or the western pillars and Rocco Mediate or the meridian rock..mediate/ meridian was wearing the peace symbol on a belt buckle during the final round and mentioned how he hoped the symbol would bring him luck several times..it didnt..