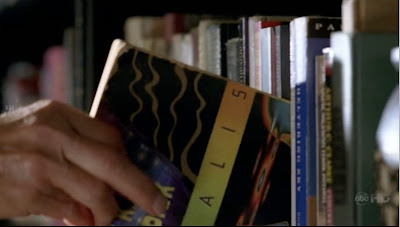 Breakfast on the Island. John Locke fries a couple of eggs for imprisoned Ben and plumbs for VALIS to help it digest. Ben tells John that he's read it before, John replies to the effect that maybe he'll find something he missed if he reads it a 2nd TIME. He was quite specific about a 2nd time, when he could have said 'again' just as easily. Further along the episode Ben has relented and gets into the book. as we know another name for the VALIS in the PKD book = ZEBRA, a black&white horsey. This sloops into the the Chariot card and B-W animals found thereon. [ See post 'Z is for Zebra' at The Blob, and Todd Campbell's article on Zebra's which I can't find at Peering Through] 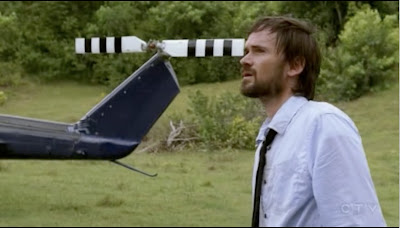 Here we find DAN the Scientific Man deliberating over anomalies the island has thrown up. The blue Helicopter with its Zebra tail-rotor emanates from Dan's 3rd eye and in the frame below -DEPARTURE - we get a glimpse of the effect of a spinning B+W Zebrafied Helicopter rotor blade. It transpires that those on the Chopper have not [ by the end of Episode 4] reached their destination. 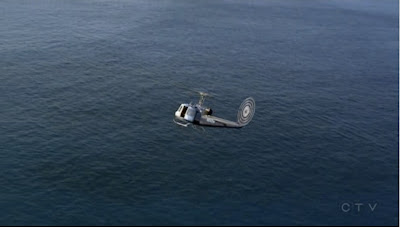 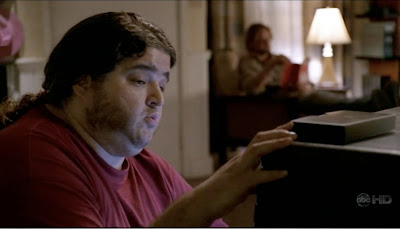 Sawyer, who obviously overheard a conversation between Bill Hicks and a Waffle Waitress sit reading something that looks like Anais Nin, while Hugo/Hurley delights himself with Olivia Newton-John's XANADU. ONJ's father was one of the codebreakers at Bletchley Park, famed for its breaking of the Enigma Code, while her grandfather was MAX BORN, a nuclear physicist of some repute.ONJs image - the classic girl next door, virgin and innocent, complementing this episode's [4] investigation of the schemes of Kate Austin. In the Blob's ' Why 2K? - Part 1 - Strange things are afoot at the Circle K' reminds us that XANADU was built by KUBLAI KHAN, via the poetry of SAMMY.T. COLERIDGE.
Other luminaries emanating from Station X included Alan Turing and Ian Fleming. They had their own phonetic alphabet call signs, a few were the same, but Yankee Zulu transformed into YELLOW ZEBRA which ropes in the yellow checker CAB , strengthening the ties twixt the CheckerCHARIOTs and the B+W animals found before the Tarot card CHARIOT, the 8th design. 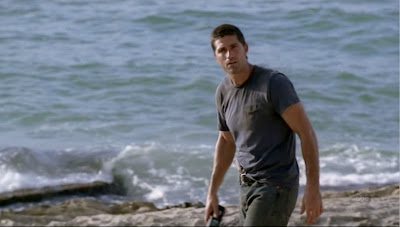 The Islandees find that the number to the ship no longer connects and Juliet advises him to try some other number, Why Not 9 1 1 - Jack looks at her like she's completely lost it. I add it as it seems a discontextual moment. 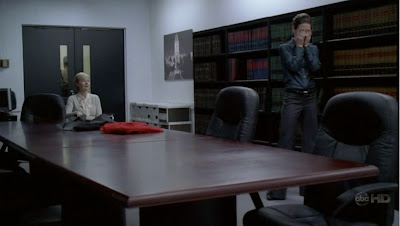 Most of this episode deals with KAA, Kate Ann Austin, her various means of getting what she wants, at times openly manipulative, but she seems to have gone beyond apologising for it, she is moving, through the world, through the Universe, she doesn't seem cruel or heartless or a bitch but she needs to get on.
Here while in court for her pre-crash crimes her ill mother comes to tell her that she doesn't want to testify against her, but she'd like to see her grandson. As Kate is on remand for the duration of the trial she sometimes wears a RED prison uniform, in court she wears GREY [ though I actually think the top may be a subtle purple].
On the TREE of LIFE Grey represents Hokmah , 2nd Sephira, oft-translated as WISDOM while RED = Gevurah - SEVERITY. Kate is 100% totally opposed to the idea of spending anytime in jail, she will be with her son. 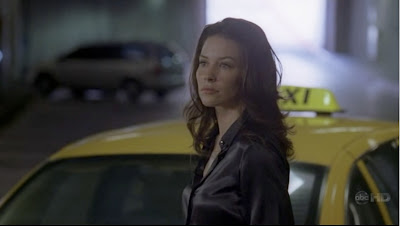 So be it - The Mother releases the Daughter, Yod HEH Vau HEH and Kate walks away from the Trial, to a yellow though distinctly uncheckered cab. As she walks to it Jack SHEPHERD , a character witness, comes over. She invites him over to the house, to see the boy. Jack declines but suggests coffee sometime. Kate tells him that there'll be no coffee until he recognises the child. He still won't accept though gracefully opens the cab door for her. The Secret Sun posted RITUAL DRAMA:JOHN THE BAPTIST IN SPACE which deals with decapitation while the title links ,for me, with Jack and a Shepherd/Baptist dual current. 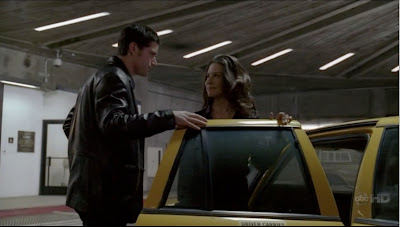 Here Kate's head peers over the truncated pyramid that leads into a chariot to take her through into the light [ the car-park exit]. Is she decapitated or has she ascended now to the role of Queen her mother relinquished. 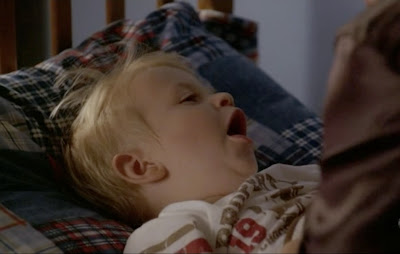 Somehow Kate has become a mother though how remains the mystery. The 19 on the the baby's shirt = ChVH , which translated from the Hebrew [or Zebrew] is Eve, [ who arrives in the Bible at Gen.III, v 20, and not earlier],AM KL ChY - Mother of all Living.
Carlo Suares writes in 'Cipher of Genesis':
' From the outset, she represents in womanhood everything which, much later on, Yhshwh [known as Jesus] represents in manhood. This is evident from her letter-numbers Hhayt-Vav-Hay [ Ch-V-H], which are a projection of YHVH. If it is understood that Hheva [ Eve] embodies in her very nature the supreme archetype of womanhood, it will be seen that there is no need to deify any woman , virgin or otherwise. Hheva being a materialized counterpart of YHVH, this archetype is shown to be at the very core of life-in-existence while Eesha [ The apple-bearer] still in the womb of Eden [ still on the island], is the inexhaustible flame, always alive. Hheva is that flame in existence: the complete archetype. In fact all personages in Genesis IV are archetypes.'
The last word of this episode is ERIN whom we know to be Claire's child , by an unknown father, as she was already pregnant on reaching the island. In this epi she offers Kate to hold the baby but Kate doesn't. We know of no father , we can play with the idea that Klaire and K8 represent the archetypes Eesha and Hheva. Hheva's child came from her ' knowing the Lord', and she named it Qaheen [ Cain]
Posted by aferrismoon at 4:31 AM

Yikes...that EXACT copy of "Valis" sits bedside to me (where I watch "Lost" btw), and it was 9:11 at the moment I finished reading this post.

A tip of the hat to you Moon..Bravo!

p.s I love words like rotor..spelled backward its still the same

Did you intend to have the double K's highlighted of Philip (K) Dic(K) on that Valis still? It's a silly and pointless question in the end but I am still curious....

Tod - well much stems from the link Jake made to u on Z for Zebra. At times I feel that many posts slip off into some Martian Timeslip, but no, they seem as roots. It reminds me of what Miles said in the episode, tied up - I'm right where I want to be, I'm n the right place [ or something like that]. Ok I notice he didn't say that with the Grenade in his mouth, but u catch my drift..
Vapo - Cheers , perhaps Synchromysticisms proclivity for double/mirror letters can extend into the world of palindromes
Jake - No , I wanted to highlight the ALIS, to play with Alice-Valis in wonderland. I will now have to check it out. I noticed his finger covers the IC of DicK.
By the way, I went to your blog half way through writing mine to get the title of the Z for ZEBRA as I knew Tod had synched a Zebra/Valis connexion. Your post was already posted, I just notice that the times seem to put mine before yours. Also , for the record, I didn't 'read' anything. This too might seem silly, trivial etc. It does mean that I was a bit surprised to be reading about PKD and the Valis-o-tronics that u linked, esp. as Locke advises Ben to read it a second time!!!??! That really 'fried my head'.
NEWS - Cheers , but that was my intention. The backward 9 makes me think that the TA can reverse to AT and thus act as a kind of postal address for ATUM.

I have never watched Lost, so am.

By the way, the salvage team that are to reclaim the stricken Spinningdale are the same Dutch company that reclaimed the russian Kursk submarine.

2 my knowledge there is no Todd "Z is for Valis" post in this existence. He sent me that sync wink in an email....

jake - what I meant was that I there was a credit to Tod on 'Z for Zebra' which I thought would lead to a post on his site. It didn't as obviously he'd emailed it.
Ciao4Now

Jake had given me a nod in his post. I thank you both for the inclusion.