Taking apart the BLUETOOTH logo into its 2 main parts we get H and B. H the 8th letter , responsible for 'joining the Towers or Pillars' . To me it also seems that the irreverant H can curve its extremities around to form an 8 which as we know = the Hth number. H corresponds to the Hebrew character Ch - thankfully pronounced a semi-gutteral H - and that leads us to the CHARIOT card and number 418.
Above are 2 forms of Rune and we shall attend to the Danish, sometimes called the Younger Futharc. Have a look at the Rune =ing H and afore y'very eyes Laydeeeez und Shentlemen, a STARGATE, or a star-shaped glyph should u feel unimpressed.
So that H turning into a Runic Star is itself a double-glyph implying a movement. The H = the Twins, a Hebrew H in the form of Flying Chariots blast the Towers which then dissolve to allow an as yet physically invisible Stargate. The Stargate has apparently opened our consciousness which is why we don't need signposts and why the Stargate isn't situated in any one place.As Kean at A KEAN EYE presaged, the BlueTooth has heavy Thoth-Rez-O-nation and thus implies that the BlueTHOTH, blueTOOTH symbol and the destruction of the Twins all imply Supra-physical communication via myriad forms.
Then to cap it all the B, the Twin mountains-pyramids, and thanks to the latest at Jakes, the female breasts. While I don't say that the Technology of Venus , male and female, are specific Stargates, pleasurable sex can often take me to places far beyond Jimmy Mundane. With the Blue tooth logo I can see 2 breasts and a Stargate and in the joyous world of sex that's a powerful gate..
The B Rune as pillarmountainmids with an H- Star between thus resonates with the demolishing of the Twins, sexual union, mountains and secret gateways - then in both Hebrew and English Alphabets B=2 and H=8 thus a TEN. No not 9 , not 11 but 10.[ See BNWO - 10=X=Ten=Aten=9/11=7/7=Stargate=Cosmic Consciousness ] 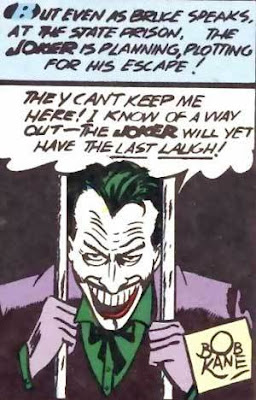 Pilfered from INSIDE the COSMIC CUBE, this H-framed Joker face reminds is of the Twin Towers, the sordid smile , like a crescent moon or scimitar -H weds the Pillars of J and B - Joker and Batman. Also a B starts and an H finishes the first and last words - But....laugH
As I did KING LEAR [ or is that King REAL?] at school my impressions of Fools stem from this stormy tragedy. Fools = wind from Latin- Fol Follis - a windbag, but the Joke, well that's usually on you/me and I find the Joker less able to tell a Joke without occupying a position of power. The Fool does it all from the ground.
The Joker would usurp ' the King of Clubs'- Batman while the Fool in Lear knows fool-well that Lear is the King of Fools , as are all in that celebrities court.
FOOL - Dost thou know the difference, my boy, between a bitter fool and a sweet one?
LEAR - No Lad , teach me
FOOL - The lord that counselled thee
To give away thy land
Come place him here by me
Do thou for him stand:
The sweet and bitter fool
Will presently appear;
The one in Motley here
The other one out there
LEAR Dost thou call me a fool boy?
FOOL All thy other titles thou hast given away; [save] that thou wast born with.
While I imagine the Joker saying these words I don't see Batman accepting them without a big boys fight. He after all has the twittering murderer cocky ROBIN. The once Fools whose coxcomb redcap has fallen to a blooded breast. The humour of Robin [ a pubescent Tom Cruise, lookswise] has wed the Moral Champion. the semi-bird, the Vigilante. Need they look around for the sources and reasons for crime, their wit is not up to it, they have power and popularity, and a pushed along by the sychophant lobbyist, the half-man, sexless , masked bureaucrat. 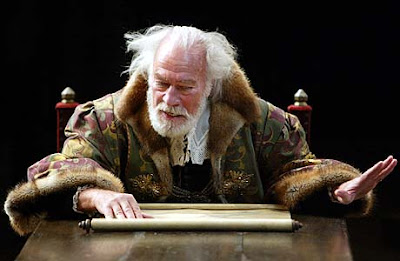 The Fools words AWAKEN, like the Cock crow of a gold-red dawn. The Mucky Robin will put u to sleep as he tells all how to be good, like a a pair of buddies he knows who can't be named, otherwise you'd realise that the amphetamine duo were blabbering on about themselves. 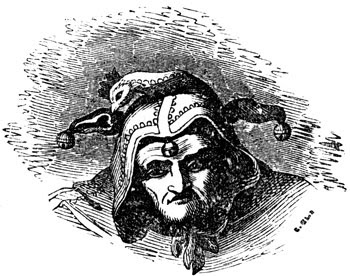 And so to the tragedy. Lear and Fool upon the heath, a kingdom lost, won and lost again as wind-snatched words buffet the players. The Kingdom is brought to account- The LEDGER = the account book and also the Stone-slab laid over the grave, all are brought to book. This also gets my synchro-sense going, Accountants, a fair bit of their lexicon can also be found in the words surrounding death and despatch.
FOOL - Nuncle Lear, nuncle Lear, tarry, take the Fool with thee.--
A Fox when one has caught her,
And such a daughter,
Should sure to the slaughter,
If my cap would buy a halter;
So the Fool follows after.
A Halter is another name for a hanging-noose as well as the classic Halter back of a thousands celebeauties.

I've mislaid the name of the speaker for this one -
He hath commission from thy wife and me
To hang Cordelia in prison, and
To lay the blame upon her own despair,
That she fordid herself 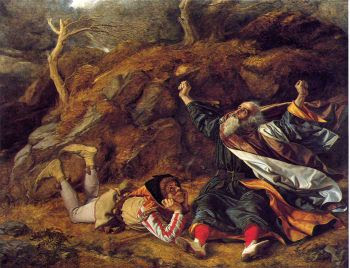 The King is Dead Long Live the Fool
But today our Kings have no problem using the Fools words, can they leave aught alone. Not content with their status, wielded power, they would steal the coxcomb to palce upon the heads of their enemies. They want the words but the image goes to another. It hurts the people to be spoken to as Fools, by Fools [ I include the press and their real/royal news] and then to be ruled by the King with his rod of severity. Mercy is loose these long years. The Press, the fools organ can do nothing but virulent attacks, vicious , hateful articles about people with nothing to protect themselves, more so when they've been made by the Press.
KENT [talking about Lear] But who is with him?
GENTLEMAN None but the Fool who labours to outjest his heart-struck worries
Posted by aferrismoon at 1:42 AM

Beautiful. That BoB Kane is pretty tricky. Batman is perhaps more then any comic book hero a "found-object" type character. Is it any wonder he and his pantheon are such a weirdness lodestone? Robin is indeed another Fool representative, a living target deployed by Batman to distract the eye as he pulls off his most amazing tricks.

You turn these analysi into sheer poetry..it speaks to a part of my mind which reads it as pure mathimatical beauty.. how do you do that?

Its like reading a langauge I barely make sense of and yet it makes perfect sense.. wow!

Cheers Astro - I think if these pieces work at all it's because there are so many 'strong' well written, accurate pieces going round that gives these some relevance , making them enjoyable.
Thanks Adam - a FOIL

Hej Aferrismoon you really have a point with the reinforcement of other well written topics.. but none of them do what end up accidently focusing upon certain things..

It says to me that this is very intuitive and what you come up with is inspired!