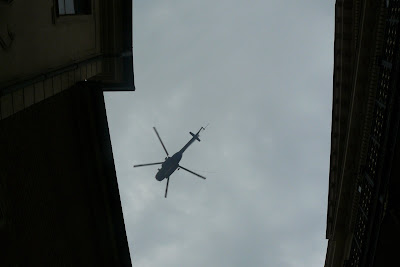 Every so often the thundering air-chopping the public demands vibrates the ear-drums so that all other sound gets blocked out.
I caught this insectisoid displaying its pentagonal characteristics - a trait I hadn't seen Helicopters show before.

Wales , a country known for its DRAGON, and its antipathy to Dragon-murderer St. George. Odd that Georgia's first football match of the conflict should be against Wales, especiallly as Wales' neighbour is England who also share St.George as a national symbol. The matches get arranged a few months in advance , any synchronauts hanging out in UEFA [ European Football Association]. To clarify for those who don't follow Football, every so often a multitude of international teams play 'friendlys' when managers try to get their team up to scratch - Georgia [ Gruzie] won 2-1
Below we see George spearing the Dragon's Maw - if we use the Galactic Centre metaphor, then George looks like he's pointing the way to Draco. Don't know the constellations well enough to know who George covers for. 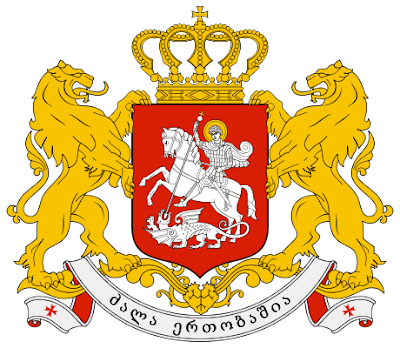 George the Dragon Killer - I gotta save that little country, before I leave office. Any country sharing the President's name will be guaranteed demo................
Posted by aferrismoon at 2:38 AM

I like how the Golden Crown seems to veil an M...

As Venus makes her visible return as the Evening Star in the western sky here, I am happy to see you're posting about the shape created over eight years of Venus/Earth dancing!

Jake - certainly has a McDee feel to it
St.George holds his reins across the spear making a nice cross
Cheers michael - checked it out, well, on u-Tube - Hell-I - Chopter
Jenn- Can u fill me in more on 'the shape', apologies a little distant on Astronomy.

I will do my best! There is much discussion about the accuracy of the diagram, expanding certainly into "harmonics" as a whole, but anything the church tries to suppress for like, a thousand years has got my attention;) Okay, look at the picture here:
http://www.glenn.freehomepage.com/writings/Pentacle/ven_earth2.gif

I am studying now about the "Music of the Spheres", this lost language of harmonics and I feel like I am back in school. I first learned of this reading John Martineau's "A Little Book of Coincidence" , and this link: http://www.halexandria.org/dward116.htm has a few good excerpts. It certainly begs a deep look! Cheers!

St. George had his own comic at one time.