When the Dog-Star Woofs the Whole Weave Warps

Twin efforts from Steve ' The Weave' Willner and Jake ' The Blob' Kotze provides a Heavyweight Tag-team bout that looks great for future contests, perhaps against the Rock, Hulk Hogan or even the Thoth-Fairies.
Steve's style hass definitely the faster delivery , sending shockwaves into the synchrosphere. These electric blows get adequately backed by the slower, cautious approack of the Blob, whose liquid jello-foam dazzle rays often knock synchers for 6 or even 8. Together this transdimensional duo have made the [star][RING][8] their own.
They say its a match made in heaven, but I know, that's just where these guys park their laptops. Any wrestlers out there think these guys stick with old tactics like Scissors,Rock , Paper ,be aware , bee very aware of - Blob, Synch or Weave [ catches ya every time]
The early scenes from MASQUERADE INFERNALE,THE HANGED MAN , AND THE LOOM OF FATE skew into view - A Weave, a Text-style, and we peer in to the synchromesh 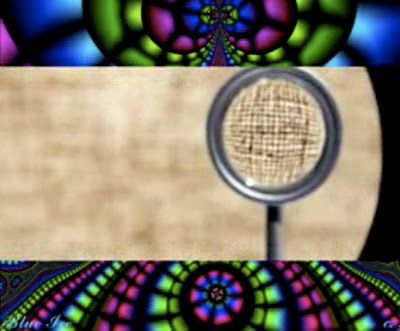 The recent news of climbers dying atop K2 percolated through the news , reports of deaths came in slowly. The vid had only time to include the headline ' at least 9 dead', though CONCRETE JUNKYARD brought reader up to date with 11 dead.The expedition brought together 17 climbers from around the world. As well as the K that equals 11 , out pops a 9-11 synching with the mountains that synch with the pyramids that merge with the pillars that the Twin Towers represent

Much ado about Heath Ledger, and much has been said about this dead-man's highly synchnificant film career. Oddly the similar features [ in some photos] of Johnny Depp & Heath Ledger [ with facial hair] popped into my view. The Joker seems a Johnny Depp type role.
{ see post -FOOLS CAP AND FOLLY-OH, for some links of Heath Ledger and King Lear's Fool}
{ see post - JACK AND MORG WENT UP THE HILL.... for Bucket List synchs}
One who did fill that role was Jack Nicholson [ Heeeeeres......] who helps to shuffle this wild pack o'cards -
Jacks a Joker see,
Who acts with Morgan Free
Man on a Mountain
In the Bucket List
Who himself , that's Freeman y'all,
Gets cast into the Batman thrall
As Lucius Fox and about the same time
We got Foxy Mulder on X-Feline
With decaps and vision-seekers
All the way to Winnipeg
Crashes Car, Loses Head
Don't mind mine its just a shed
Ding of Skin and Sleight of hand
As we suffuse our holy land
With mind and mound and pounding sea 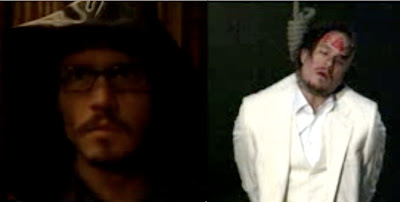 Heath Ledger's lifestyle can also be made to fit in with the various MK-Ultra-Monarch Mind Control Split - personality themes. Not hard as a celebrity's life proves somewhat distant and idealised from non-celeb circles. The actors have to take on various roles, which do affect their 'real' personalities. Then their 'real' personalities have to take on a whole heap of media-prying , while outrageous stories shrill the populus.
Still he managed to have a relationship with the Olsen Twins [ Jimmy Olsen , a Superman character has had his Cross-dressing investigated in various SECRET SUN posts]. One has the initials MK 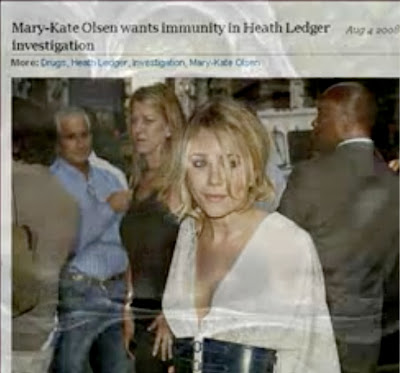 On The JON STEWART show the other night he highlighted The Presidents record-breaking 134th foreign visit and likened him to a HOBO, posting this graphic of No.10 DOWNING St. with Hobo signs. The Man At Ten was Mr. A Blair, who shares his name with a Candy company BLAIR CANDY.
The Eagle-Stargate motif , with 11 stars complemented by the krazy-looking KAT-K@-K2 , K x 2 = 22, thus a sneaky 33 on that door 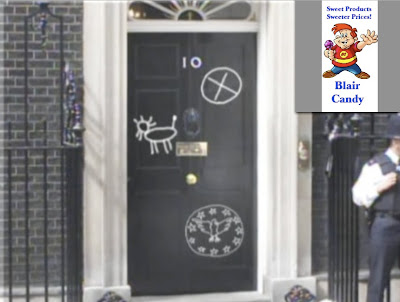 The Cross in the Circle seemed to graphically interface with the Zodiac/Crowley grid-pattern which , spewing forth from the Blob, has to include ManhatTEN. The Qabalistic TREE OF LIFE has 10 Sephira too. Apparently one of Jon STEWART's distant relatives Authorised the Bible in the 1600's , King James 1 of England, also a Stewart. 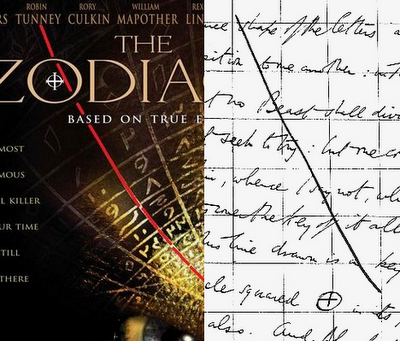 Back to the Bat, and WISE WOMAN researched worldwide bat-lore which funnelled me off down the Maya path to meet CAMAZOTZ, a Mayan Bat-fiend that battles Hellboy in SWORD of STORMS, while in the legend of POPOL VUH, the Mayan Hero-Twins, Hunahpu and Xabalanque, battle many bat-fiend [ called Camazotz] in the Bat-House, near Mayan hell.

This then sparked off a journey into candyland where we find a sweetie called ZOTZ, a mighty name indeed. ZO gives the OZ we've become accustomed to, while the OTz describes the Hebrew word for Tree, and as such they call the Tree of Life OTz ChYYM [ otz chayim ]. The company issuing these crazed bonbons = G.B. AmbrOSoli of Italy. The description claims " at first it looks and tastes like a HARD CANDY but if it is bit into or a HOLE APPEARS sour fizz comes out.
Mmmmm, stargate appeal

Further incursions into ZOTZ territory left me breathless as I perused this pic of a film called ZOTZ, from a book by Walter Karig. The story involves archaeologist and linguist Dr. John JONES [ Indy precursor?] finding an amulet which can have painful or fatal effects on whom it gets pointed at + the voicing of the word ZOTZ. The 1962 film is a comedy.
See the Gunmen on the rooftop, and a gag about the Pentagon. In 1962 the the false-flags plan called OPERATION NORTHWOODS published its 'ideas' on how to win a war one has started on oneself. 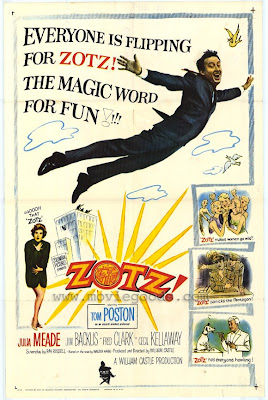 Al in all a weave that waves the woof outta the warp
Heath Ledger = Joker = Jack Nicholson = The Bucket List = Morgan Freeman = Batman = CamaZotz = Zotz Candy = Kandy[ SriLanka] = Mountain [ Kandy = 'mountain' in Sinhalese] = K2 = Pyramids = Pillars = Twins = MK and A. Olsen
The double FOX - Lucius and Mulder , both coming out at the same time , wiggles a thread . The DUCH in David Duchovny translates as 'ghost' or ' spook' in Czech. The X-Files made very little return in comparison to the Dark Knight [ DK = Dead Kennedys, Barack Obama = a 'dark knight' and has vague Kennedy-mythos attachments] but apparently the cast haven't got killed, injured or arrested.
Of Bats and Boys
And Cars and Toys
How shall we hear through all this Noise
Stand at the centre of the cyclone
That low-pressure area we call home
And Spin
>>> News Flash - Read Jake Kotze's ' The 10th Dimension and Synchromysticism' t the Blob.
Posted by aferrismoon at 4:44 AM

I love the title! And what a journey following those pesky bouncing ZOTZ around! Didn't realize they boucned so high!

Geesuz, Ferris - your wheel she be spinnin'! The Zotz movie poster is wild. It reminds me of a Doris Day, Rock Hudson effort called 'Lover Come Back', where Rock is an advertising man who creates an ad for the perfect product, called VIP, that doesn't actually exist.

The Hobo reference is interesting, see the latest at gosporn.

What a great post - loved the mix of wordplay & poetry.
Very elegant & creative.

Michael S - still intrigued at the initials MK for Miss Olsen, have any ideas?
Mike G - Hobo and Fiend seemed to flicker between posts.
WW - it would have fizzled out prematurely were it not for the Bat Research, cheers

Also Mike G, its odd how 'sweets' came in after such a 'bitter' post previous

Will talk about K2 news in new post I am working on.

Joy to entrain with you.

10-10 Good Buddy.
Found that a lot of that entraining has been going on
Mike G wrote about Hobos and Fiends , 2 'odd' words that popped up in both our posts within a day.
Then there was synchs with Mike S, Wise Woman and Solomon Grundy which eventually brought on WW doing a batman post [ apparantly going into the Superheroes is a bit unusual for her - this got Camazotz which gave Zotz then Otz- the tree, and also the Mayan-Twins which I just added as it said Twins
Looking again at Mike Gs comments ROCK and HUDSON ......!

My guess is these little "olsen twins" are more than likely MK/MMC victims as well as poor Heath was.
They were raised ala Disney-esque environments starring in Disney produced films. How perhaps she is wrapped in Heath's life--I don't know. Worth investigating considering how much she bellowed that she wanted immunity from being subpoenaed to court.

Love your work brother, your weaving a wondrous piece at your blog site!
Be well.

It does seem odd how she wants immunity , like she knows that someone will 'trigger' something that'll make he divulge things

Great stuff, I got Heath Ledger's movie Two Hands (before seeing the new Kotze video and your post) and did a write up of it, mentioned MK Olsen too, Ashley and Mary Kate AMK (11311=7).

Nice image from the Daily Show and analysis, saw that then kind of forgot about it, I swear with some of his guests he sometimes just stands there doing different freemasonic poses and hand shakes. Probably just my paranoia though ^^, keep up the great work.

cheers Ben , read your post.
Yeah the Stewart show does seem staged at times, in awierd way. I guess they all 'know' each other from way back.
I think you have married your 'paranoia' with humour and of course a bit of cynicism, and generally you let people make up their minds.
It seems to explore we have to get into something that perhaps makes us look a bit obsessive and para. It seems each one of us acts as threads.
I like that full on numbers and names thing you do, its makes me think in different ways
Cheers

Thanks for the invisible dog comment, that made me crack up this morning!