A transatlantic furthering of the Nosis spilling over from the BLOB. This pic got posted with the 1 below on August 11th [ Jim Sanders interview and Dora]

Walking to the tram on I.P.Pavlova, at 19.33 on Aug 13th, I stopped short of the public transport and snapped this ad for a language agency . I have seen this before but the synapses hadn't been primed for noticing it in full. Now they have so here it isis.
You'll notice the Orangey feel to it while the address = Belohradska [ White Castle] 79. If one enumerates YAChYN and BOZ [ Jachin and Boaz] , the Hebrew names of the Masonic pillars they = 79 each. The district is Praha 2 , so that deals with the doubleness. A double - M , or stylised and rotated 33 , graces the background in florid technicolour. 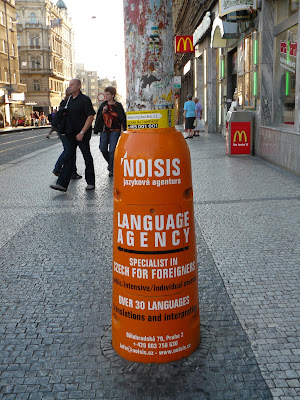 Fuller posts will come soon, though internet connexion proves presently elusive or short term.
Such = Synchromysticism
Posted by aferrismoon at 3:26 AM

Know her, well I used to , but she stood me up [ like Osiris].
Great time on your comment