Allegedly a second shooter shot RFK in the back. 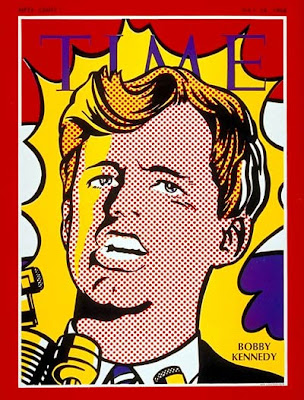 Check the cover of Time Magazine that was issued exactly on May 24, 1968. Robert Kennedy on his brother's assassination golden ratio. 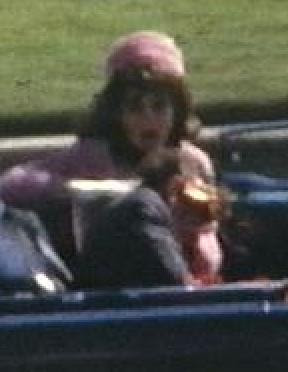 The shootings of humans in Tucson { Two Son}, Arizona spits out the name Jared, one of the shooters.

In Hebrew it's spelt :

Others have substituted alphabetical letters for the numbers and come up with B-A-D.

Jared means 'to descend, fall; yard' and Jared Lee Loughner, 22, was tackled to the ground while reloading his GLockenspiel.

Looking YRD up in a Hebrew dictionary I noticed that the next but one word was:
YRH which means 'to shoot, fire, gun, loose'

It's followed by a phrase:

It means 'to shoot indiscriminately' !! 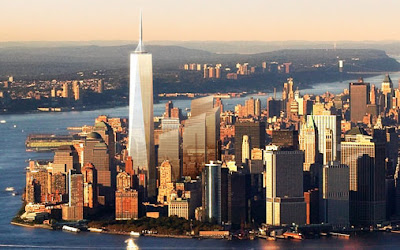 Masons use Hebrew in their belief system , amongst other components, so I wonder if the Founding Fathers deliberately chose the year for its auspicious hidden meaning.

Since Masonry is eminently entwined with building the use of measurements doesn't seem too unusual.


Allegedly killed by the Grim Sleeper , a serial killer. Whether this is his writing and the date of her murder I don't know. I include it for its proximity to the WTC attacks. 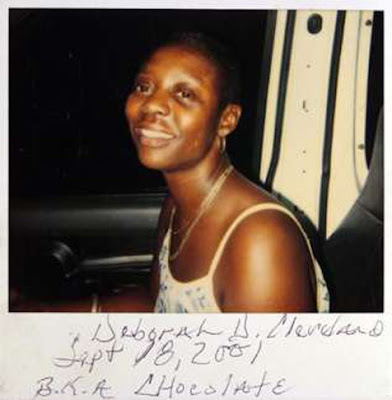 Sarah Palin's targeted Democrat seats , including the seat of Congresswoman Gabrielle Giffords who seems to have been the main target of the shooter, are marked by gun crosshairs. Mrs. Palin hunts. 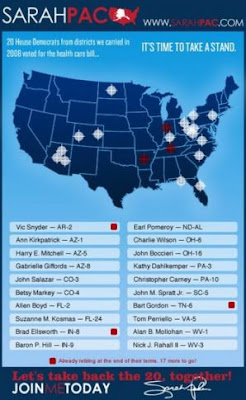 There are reports of a possible second shooter and police have surrounded a house at 7700 N. SOLEDAD AVE.

77 have just died in an air-crash in Iran.

Christina Greene was born on 9/11.

'Christ in a green'

Further info on the shooting at TWILIGHT LANGUAGE, post: 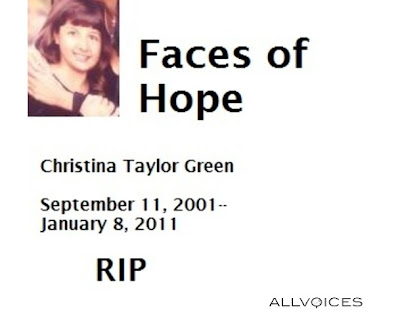 "At an event roughly three years ago, Rep. Gabrielle Giffords took a question from Jared Loughner, the man accused of trying to assassinate her and killing six other people. According to two of his high school friends the question was essentially this: "What is government if words have no meaning?"

Loughner was angry about her response — she read the question and had nothing to say.

"He did not like government officials, how they spoke. Like they were just trying to cover up some conspiracy," one friend told The Associated Press on Sunday.

Both friends spoke on condition of anonymity, saying they wanted to avoid the publicity surrounding the case. To them, the question was classic Jared: confrontational, nonlinear and obsessed with how words create reality."

In the US words created the constitution but it sure ain't no reality.
In the beginning was the word....?

Loughner wants to know why governments say things that they don't actually do, as in 'We'll make the country a better place', while all the time seemingly doing the opposite.

Now if anyone accuses government officials of 'newspeak' they will be looked upon as if they have murder in mind.

Well science proves universe is non-linear so you can tell where this is going - get in line and do NOT accept what your senses tell you.

The media works people over completely. It doesn't need to target individuals , it just targets everybody and awaits for the one-in-a-million [ The US has 300million or so experimentees]


This event makes me think of the film TAXI-DRIVER where Travis Bickle attempts to assassinate Senator Palatine , though he fails.

"Dupnik said Sunday that Loughner had communicated with Giffords' office previously, and was invited to a 2007 event, but the sheriff did not elaborate. The complaint filed against Loughner said that a letter from Giffords was found in a safe at his home, dated August 30, 2007, thanking him for attending a "Congress on Your Corner" event at a Tucson mall."

Some time after posting the 'Taxi Driver' observation
I read further comments at TWILIGHT LANGUAGE this was writ by ANONYMOUS:

'It should be noted that the older man originally suspected of being Loughner's accomplice has been identified as a taxi driver who had the misfortune of driving Loughner to the event. He has been cleared of any involvement.'


Dankzegging to 'Fleischer' at Spitsnieuws.nl for linking this post.
http://www.spitsnieuws.nl/archives/buitenland/2011/01/belletjes_911_tucson_openbaar.html
Posted by aferrismoon at 10:08 AM

Christ in a green emerges from the 9/11 triple bogie

thanks for the detail on the cabbie. i will update my latest post.

Hi AP, yes . it was from a comment but I didn't check it back.

Anyhow the 2 shooter thing , absolutely only 1 shooter 'revision' and then written out of the script.

The problem with the vast dishonesty principle does lead one to look at what others may describe as para-conspiracy.

The story is chock-full of multiple leads, both physical-relatable and the more tenuous number-symbol instances that abound.

Regarding the cab driver, i am surprised that we don't have his name. There is no interview with him that i can find on the net. And nobody seems to be concerned with the fact that he was one of the few people who saw the shooter before the rampage as he drove him there. Is no one curious about his impression of Loughner as he presumably spent a little time with him?

I would have imagined that at least one journalist might try and get an interview or something…it's the sort of thing that the media doesn't pass up.

They are telling us he was a cab driver and that he had nothing to do with it. And that's it. End of story!!

I guess the police have spoken to him to make sure he's not involved , but yes, he is the classic witness[ I hadn't thought about it before] he would be able to give a lot of info on Loughner's state of mind and what kind of baggage ge was carrying.

Shall keep a lookout for any developments

Yes, it was the police who cleared him and said so through the media. But that doesn't really say much for the police. Wasn't the sheriff one of the firsts to point the finger at Palin & co and their supposed nefarious effect on Loughner' actions? He didn't provide any evidence to this. And there still is to this day no evidence to tie him to Republican politics. But that didn't prevent the sheriff from lighting that first match.

How responsible is that from a law enforcement officer? Shouldn't he have waited until more facts are gathered as it is still an ongoing investigation?

Maybe i'm i'm reading too much into this...

Also, the ages of the dead add up to 33. The address of the incident is 711(convenient)0 North Oracle Road. Would like to know if the address of the Motel 6(of course) is on congress street?

The sheriff acts in the same way as the JFK and 9/11 events - sending out a theme while the media and interested parties organise themselves for the storylyin'.

I doubt you read too much into it.

Satanvision -I guess u mean 333, very interesting as its Choronozon, who I believe is the 'dweller in the abyss/subway'

The cabbie can't be too involved. He didn't have "Loose Change".

"Masons use Hebrew in their belief system , amongst other components, so I wonder if the Founding Fathers deliberately chose the year for its auspicious hidden meaning."

a certain group of them did, no question -- e.g. the bavarian illuminati was founded may first 1776

the gunsights from yr illustration of the SARAHPAC fundraising logo twin Obama's signature and Zodiac's mark, his last missive ending with "I am now in control of all things"

seemed a bit grandiose then, but now ...?

"Loughner wants to know why governments say things that they don't actually do, as in 'We'll make the country a better place', while all the time seemingly doing the opposite."

"This event makes me think of the film TAXI-DRIVER where Travis Bickle attempts to assassinate Senator Palatine , though he fails."

the film is definitely inferred, so, Palatine, so Rome, and we were discussing the Mars/Mar-ti connection in newspacemanland re Mark Kennedy and his Marty Feldman eyes, the 2012 olympic stadium design, and greenman osiris/phoenix rising

that is, the temple of Mars being located on the Palatine Hill of Rome, thus its relation to a mew temple of olympians

News - thanks, have begun another post on this subject and it includes the 7/7 date.

the next in sequence is

7/16/2005 - the release date of 'The Half-Blood Prince'. In Harry Potter the students get there via an entrance at Kings Cross Sta.

HaHa , had already targetted your post with Zodie and the 'Bam!a signature.

Am cobbling together another post on this loaded event.

Loughner lived on N. Thorneydale Rd. One thoroughfare joining it is W.Mars St., while a few streets away is W. Clarisse St., invoking Clarice Starling which in turn hauls in the falling birds and Taxi Driver.

Good call on Taxi Driver. There seems to be something very significant about this movie. Here's a brief overview of what I wrote elsewhere:

In The Fifth Element, Bruce Willis is the Taxi Driver who must defeat Gary Oldman, who also played Oswald in JFK. Willis is assisted by Ruby Rhod--as in Jack Ruby.

Various 77/LL syncs come into it, especially when remembering that GG is ΓΓ (Gamma-Gamma) in Greek.

G is for Glock in th updated 'learn the Alphabet' for school :)

Soory Lougner lived on Soledad , but its next to N. Thorneydale

The Magical Mystery Tour of how Aleph becomes Greater, the ride only costs $1

any chance of link to easier to read copy?