AtomHeartMother - posted on Feb 1 threw out a few plastic shrapnelites and other crash-site debris.
On a local note Newspaceman picked out the inclusion of DN-54 [ Dan , from Lost] and linked in David Beckham's 108th cap for England [ Association Football]. 2x54=108[ as well as 2x2x3x3x3]. Dave wore no.17 that evening in England's 2-0 defeat by Spain. Mr.Beckham ties in to the Olympic Closing Ceremony as he kicked the ball to London/Zion 2012 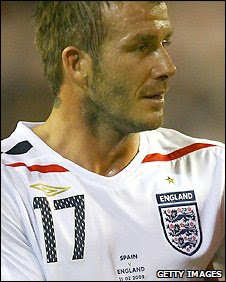 In the same post I had posited Dan , from Lost, as DN = 54 , and that = half of 108. Newspaceman then proceeded to write a post ALL TO GELLER NOW whose main pic , WITH Uri geller has DAN on top and bottom of the computer moniter 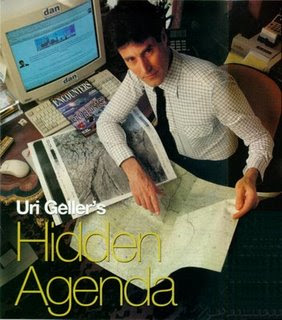 On a more worldaround note the recent fatal crash by Flight 3407 synchs for me with words I wrote at the beginning of that post.
47 hits between the 3 eyes like a bridge to nowhere , nowhere =ing 0 , and so encapsulated [ 100% hindsight] - 3 ,4,7 and 0. The text also speaks of Code 47 , hitting buildings and eventually 3x47 which = 141, a number brought out by Carissa Conti, in her writings about MiLab abductions and eVents 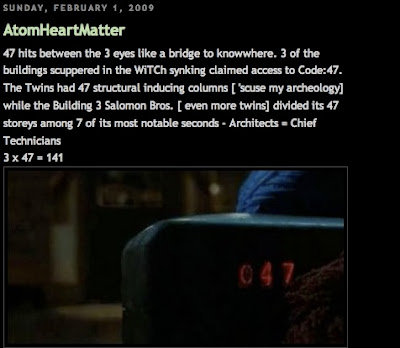 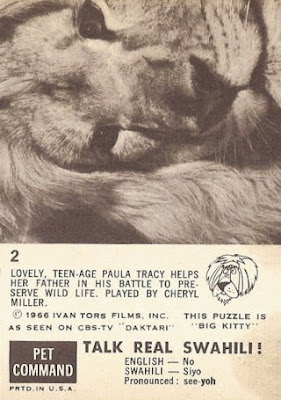 When I heard Clarence I got the usual childhood TV programming flash - Clarence the Cross-eyed Lion - a synch with that controversial Leo Al Crowley?.
Clarence regaled us with his presence in the series DAKTARI - Doctor in Swahili, the language of many in Kenya, home of Obama's father's side of the family. Hello! Big Kitty. Hi Big K@
Unfortunately movie memes insert themselves at all ages and Hudson Hawk came to mind with the crash-landing a few weeks back.
Thus a Hawk and a Lion from this eddy of the multiflow . Clarenceowley The X-eyed hawk. The snapshot of the clock stopped at 047 comes from the intro of CITY OF EMBER,which [p]rimes with September 911 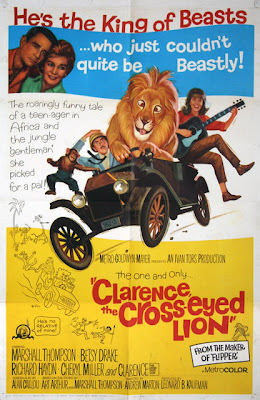 it never ever fails aferris-no matter where Clementina is in the condo-when I come over here to comment to you she jumps in my lap-she is also more insistent on staying -if I put her down she will leap back multiple times-ok now she is purring-very very interesting post-found the numbers info fascinating -I am so glad someone else has looked into Carissa Contis work! It is so strange sometimes -was just gonna try to see if 3407 and 1549 were primes (normally i do not think i woulda thought of this-but i have a book about numbers from the library from Clifford Pickover -and a lot of stuff about primes and such is there)and I thought-well I will check out aferris' new post first! Ciao and Meow for now aferris-I just can no longer deny the clementina/aferris affect!:-)

The guy in the upper left of the Clarence poster (which made me laugh) closely resembles Obama.

Interesting how in the flight 1549 crash all lives were spared but in the 3407 crash all aboard died. One occurred during day, one during night. Twin pillar activity?

Cheers Devin, quite a few bloggers seem to have felinfluence. Ed at Mercury's Garden = a K@Tophile.

Tommy- The death/lack of death seems like a kind of Beacon of Attention - Night and day , Fire and Water , all very clear cut.

Thanks afm, I missed the Dan's on the computer, even after your comment.

Things have an odd way of emerging

Always enjoy the comments here too!will have to check out Ed-I think his is the lovely site with the comics and details and stories about them! definitely got a lot out of what ray and tommmy said-like NSM i missed the Dan at first also-I think the bits with the numbers must have something to do with the way 3D reality is generated -I have one 'theory' but really do not know how I would 'prove' it or even toy around with it anymore-I thought that perhaps some number like pi (got this idea from Cliff Pickover)but expanded on it a bit i think?) is being 'read' by something-I dont know perhaps some sort of hugely powerful computer? and taking out strings of code -that would actually code for each and every one of us and our reality-the process of how 'codes' are 'picked' out of the infinite expansion is what i dont know-I think Pickovers original paper or thoughts on this was called 'We are in the digits of pi and will live forever' -when I first read that I understood how an infinite set of numbers could encode each and every one of us-what i couldnt understnd was that I thought there would have to be some process by which the codes for us are separated and 'read' out of the number -I could be very far up a tree here (feline like;-) but I wonder if a system that projected 3D 'reality' this way would have a 'preference' for primes? best as always to you!

This emerged today, I don't know if you can do anything with it:

great work as always, when i read the words "all together now" in your post the song was over the radio and that line had just played as i read it hah! lost is a rich one, it is in the collective NOW of consciousness, people looove that show, maybe its because its a cosmic looking glass into our present reality.

You little beauty had forgotten all about Daktari - am on a lion hunt ATM - very friendly of course - amazing to see this info appear so purrefctly.

Didn't know about that crash - amazing how your numbers coalesced.

News-seems a bit like - read a few blogs and create news stories out of them. Cheers for the lead.
Also look in Indras Net comment about All to Geller Now
Hi Indra - just wondering if u read 'all together now' or 'all to geller now'.
Lost seems to have enough unpredictablity unlike other weeklies, which can be predictable from the start.
It doesn't really try to portray contemporary events, and the story = highly unlikely , as the world is truly, even though every govt., bank, insurance company wants total predictablility.
Wise - your last post had mil-LION, so not to far off.
When I saw the 2nd crash's number I thought it must be prime, the only thing that seems to connect the 2 flights[ except that they're planes]

Funnily, I was going to utilise the Farm's song when I posted, but never.

It was the uninhabitated island purchase by Geller/No man's land in the song.

Maybe I should listen to myself more?

Just had a look at indras' blog (for first time). Cannot believe the polar bear thing.

Just popped there myself - found the bear.
Also it winds back round to the bear on Fox's Glaciar Mints.
The article u sent me too , about the bears , Lost and bear as icon, to con us into concentrating on 'saving' the bear , while attempting to keep its environment exactly the same for all time, at vast expense to people who will break their balls working 48 hours a week just to cover the mortgage, if of course they're one of the small percent who are allowed one.

Apparently if the ice melts they\ll turn brown, but I guess some people like to look at the white ones, so letss not let them adapt, or the palnet for that matter.

I must be the only one around that doesn't watch lost, I see some characters from other mind-washing shows on there and I kinda shrug my shoulders and go "MEH". Just totally disgruntled with Holly-weird at the moment mainly due to my own musings.

The one focus that keeps me downshifted away from it is the archetypal Actors the blogosphere has revealed the past year or two. It makes me wonder now if the writers of the shows/movies or those behind the scenes are placing them into these roles? Who are these actors agents you know, that line up their opportunities for them? Does Holly-weird have one big cluster-f**k meeting where vodoo writers sit around saying "O.K. we're going to use this actor to represent Baal and then this one to .." well you get the point.

Love your weaves, it helps me to see the golden thread used.

cheers Mike
someone downloads it and 1 day a week i watch 5 hours of that, simps and the law and order , crim minds things that all merge into 1
Lost seems to lack a social-political, overly moral thang, while the others seem to try and tell people how to think, dress, speak etc etc
Every week all the cop shows have something similar - dead fish, teen gang, russians, or some little connector.
Defo don't try to watch it.

Oddly I notice that all the black people aren't in it any more.
Laurence Fisshburn has taken over fron Grissom in a Forensic series from Las Vegas
Grissom was an astronaut and Larry fish played spacey Morpheus
Who knows Michael, I think they just read our blogs

I don't doubt that lately! I was curious about the Writer's Strike awhile back in Holly-weird, if that was something else other than what we saw. Perhaps the remaining writers didn't want to keep recycling the same stuff over and over, especially with the occult genres.