Murderers of the Sun 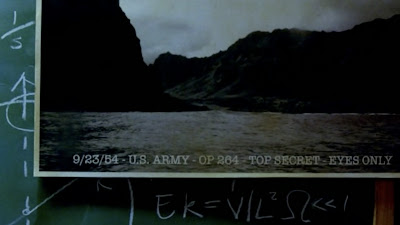 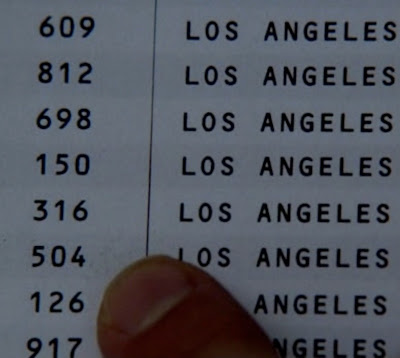 Following DA BLACK WHOLES unlink to EGG SALAD ANNIE who wrote a couple of posts - HEYOKA COMET and GERONIMO!
The Heyoka Comet spouts a green tail and travels 'backwards' through the solar system, its called Lulin.
It seems headed sunwards.
The Geronimo article referenced number 322 , a number to do with the Bull and Scones Suseyety, an organisation they say.
It got me to look at Genesis Ch.3 verse 22. which via the `Hebrew, the whole verse = 3160, yesterday morning. Dividing 316 by 4 will get 79.
Genesis 3:22
"And he said: Behold Adam is become as one of us , knowing 'good' and 'evil': now therefore lest perhaps he put forth his hand and take also of the tree of life , and eat, and live for ever."
VYAMR YHVH ALHYM HN HADM HYH KAChD MMNY LDOTh TVB VRO VOThH PhN-YShLCh YDV VLQCh GM MOTz HChYYM VAKL VChY LOLM:
Characters: 79 ; Words: 22 ; Enumeration: 3160 [316=4x79] 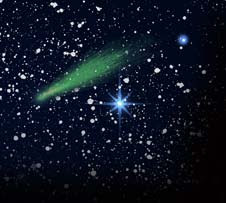 bbbbThe tttThe
316 led me to John 3:16.
Sometime after I ran into DEDROIDIFY's post LOZT AND FOUND 316, about the episode I watched a few hours later. The Flight 316 whence the Lostees get back to the Island
316 = YRVQ = Green, also slang for the $-dollar
316 = YVSh = Yosh , a name of Jesus
Gimme some Green , Sweet Inbetween

Thomas comes out in the episode, in the bible they call him Thomas Didymus - Twin [Good] Twin,[Evil] they never give his real name, and as Jesus wasn't really Jesus then I guess Thomas wasn't either.
He encouraged everyone to zoom off to Judae and die with Jesus - YHShVH326 in JOHN 11:16
"good' and 'evil' may = belief-disbelief , as in Doubting Thomas, and once we decide to check things out we become as 'us'.

ST.Ick it in the rabbithole 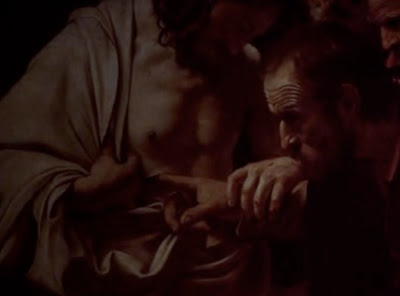 And God so loved the world that he gave his only begotten Son, that whosoever believeth on him should not perish, but have eternal life.

The word 'believe' takes on its personal context here, though it has acquired semantic stultification in some circles
The below shot on the left comes from an episode a couple of weeks ago, showing the 'leaning cross/mast' , its angle resonating the 23.5 degree angle of the earth's axial bent. Jesus carried his cross at an angle, as does the pharoah to the right. 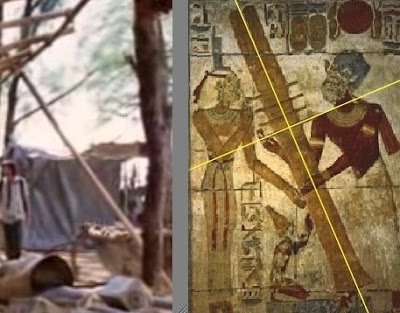 LOST came out with the trans-time mapping device , plotting the Islands likely course as it careens around the South Pacific. Its star-shaped criss-crossing not far offshore OZ
Flight 815 + Flight 316 = 1131 , the Trinity in guises 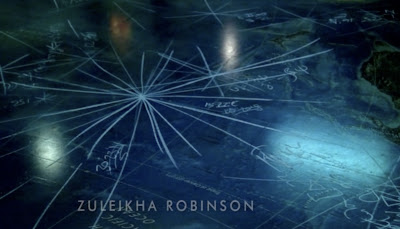 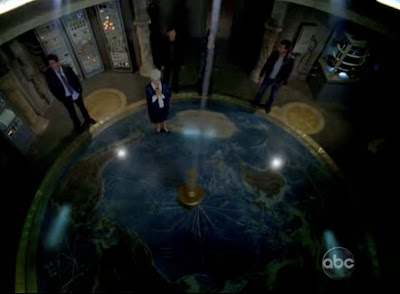 Supplemental to various shoe-throwing events recently we find Jack using his medical skills to fit his fathers shoes onto the dead John Locke's feet, a pseudo-Egyptian ritual that will doubtless enable John to walk - wow, animism's back! 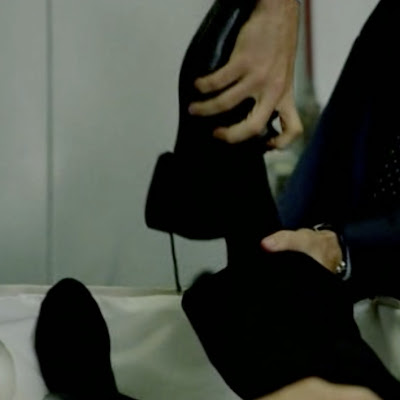 Joyce wrote ULYSSES over many years , though it focussed on one day JUNE 16th 1904, a couple of months after Crowley had 'taken down' the BOOK OF THE LAW. 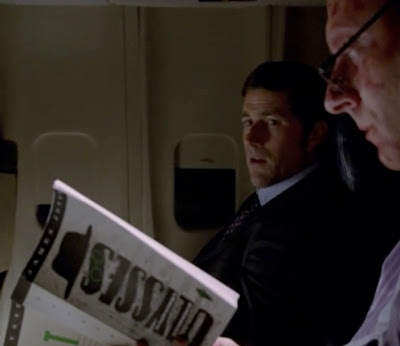 "The voices blend and fuse in clouded silence: silence that is the infinite of space: and swiftly, silently the soul is wafted over regions of cycles of cycles of generations that have lived. A region where grey twilight ever descends, never falls on wide sagegreen pasturefields, shedding her dusk, scattering a perennial dew of stars. She follows her mother with ungainly steps, a mare leading her fillyfoal. Twilight phantoms are they yet moulded in prophetic grace of structure, slim shapely haunches, a supple tendonous neck, the meek apprehensive skull. They fade, sad phantoms: all is gone. Agendath is a waste land, a home of screechowls and the sandblind upupa. Netaim, the golden, is no more. And on the highway of the clouds they come, muttering thunder of rebellion, the ghosts of beasts. Huuh! Hark! Huuh! Parallax stalks behind and goads them, the lancinating lightnings of whose brow are scorpions. Elk and yak, the bulls of Bashan and of Babylon, mammoth and mastodon, they come trooping to the sunken sea, Lacus Mortis. Ominous, revengeful zodiacal host! They moan, passing upon the clouds, horned and capricorned, the trumpeted with the tusked, the lionmaned the giantantlered, snouter and crawler, rodent, ruminant and pachyderm, all their moving moaning multitude, murderers of the sun." [Ulysses - Episode 14, Oxen of the Sun]
Posted by aferrismoon at 10:46 AM

Absolutely splendiforously fascinating aferris! When you broke down the 9112001 number -I think one that came out and kinda jumped at me was 587-wasnt that the flight that crashed in Nov 2001 in Rockaway NY after takeoff to the Dominican Republic? I may be wrong-will check flt number and come back if I am -I really love these posts with the numbers-thanks for all your hard work aferris!

This is so great -I so wish I had the intuition and knowledge of mythology-creation myths (mathematics with you also:-) world history-religious history to at least try a synch article-the flt 587 was correct-crash date 11122001 around 916 am EST it was an Airbus A300-605R and the registration was N14053
I guess the set of numbers came up in lottos that day also in NJ on one a normal payout of 275 was reduced to 16 dollars cause so many people bet on crash numbers-call me silly and sentimental-but I would never bet on a frikkin aircrash Number-not judging anyone who does-just seems wrong somehow to me -O i just thought of something -will go tell wise also for mil-Lion man on flt 191 on May 25 1979 the Bionic Woman (lindsay wagner) was supposed to be on that flight -last minute intuition made her change her mind-all the best as always aferris!

Author mARK Twain said his spirit was teleported from Halley's Comet. It is thought he lived his whole life as a part of that comet. I watched an animation based on Twain recently.

If you got time to watch it all I find it quite relative to this specific post.

Eve between the pillars.

Cheers Devin will check out the 587 , jeex , the whole weave is held to gether by 20th and 21st century aircrashes
The 191s I know about , there's about five 191 flights that have crashed.

there seem many other ways to find numbers for the lottery

cheers for the info

Thanks AA - the whole Green comet , mixing with all this Osirian growth, and hell everythings gree, and returning [ perhaps not the dollar though]
TWAIN - as in never the twain shall meet - means two. Mark2.
Have u seen DARKSTAR when they surf into the planet while another wanders off round the Universe with a constellation.

Had to come back to this one aferris -no hurry at all to do any response-I know you are busy -fascinating about the air crashes -I would not get on a flt 191 for a million bucks-the 23.5 degrees info and the Ulysses info also very interesting -I had never thought of Ulysses this way (and will confess-never read whole book) but that would be a perfect book to think of as perhaps a precursor? to synchromysticism-I remember the word 'quark' was used from the line "three quarks for muster mark" (may not have quote exact) for modern physics-all the best to you as always!

Checked out some footage of Darkstar. How did you watch the whole movie? Are you a B movie buff? I noticed its JCs second movie. I'm gonna try and find the full version.

I havent seen any analysis linking flight 1(5+4)9 to 911, but something seems to be there.

Bush was symbolically born, as a president, on 911. He symbolically died on 1/15 (date of 1549) as he delivered his farewell address to the american people.

on 911 two symbolic birds crashed into the pillars killing approximately 3000 (or roughly 1500 per bird).

on 115 one symbolic bird crashed into a (real) bird. All 155 passengers survived.

both in nyc. one adjacent to water, the other on the water.

there is probably much more.

Devin had a very interesting point about the Bionic woman - reminds me of Sir Edmund Hillary pulling out of the flight mentioned above!

The QUARK quote comes from Finnegans Wake, the dream to the daytime of Ulysses

Thanks Winston , bird = ironplanes, includes the 'Native American' wordology.
The Birds - also used to be used in Rome to predict the future from their entrails - perhaps the entrails = the numbers and details.

Cheers Wise for the extra flights.
Lindsay and Hillary are both man/woman names

Apologies for incl. 911 with Flight numbers

It must be significant that the LOSTees fly out of Los Angeles, or The City of Angels (name of second Crow movie), back to where ever it is the island is. The airport code is LAX, as in relax, loose, or loose bowels: letting it floW :D
LAX = 37, a pretty important bible gematria number.

The name "Robinson" over the island pendulem map reminds me of the stranded adventures of Robinson Crusoe, or the island in the Pacific named for the story. (Also the blue-egg/earth for the 'son of the robin'?)

Good stuff on the Doubting Thomas-Jack connection. Also I think you're on the mark with the personal pole shift of the leaning cross and pendulum.

The weave is wavering in the wind with iron birds is it? Wow your commenters really leave loads of info!!

I've GOT to learn Hebrew...

Be well my friend!
Cheers!!

P.S. Sorry for double post but I cannot believe I forgot to mention this...

...remembered when I was putting firewood into the fire...9/11 has been following me around the past week and a half in a variety of ways!

...and the powerball tonight here in the states was...11

Hi Vio - the pole-shift idea came from one of Devin's comments , he noticed the 23,5 x 2 = 47, which synchs with the Buildings destroyed on 9/11
Also Swiss Family Robinson, and also The guy acting as Widmore in Lost used to play Jim Robinson in Neighbours [ an Aussie soap that brought Kylie to the world]
LAX - well the Lostees have had to let go of their egos or whatever , relax, get back to the island
Mike - must say I know 'hebrew' in a very specialised form, e'g odd words, and flicking through the dictionary, and theiir numerical significance.

News - had to come to London for 4 days, here now til tomorrow, so run into the Fred the Shredder business.
Royal Bull Shit, as well as RoBberS
Also went to Portsmouth today and saw 3 ships, the Victory , the Warrior and another metal one

Cheers all, and as Michael remarks, wonderful comments