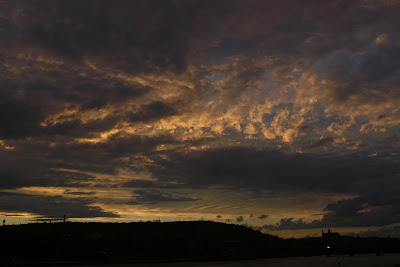 Not far from Chez Moi, the other night, late evening, the blue sky got assaulted by storm clouds mingling with the dark of night while the sun shone imperiously through. Low on the horizon , to the right St. Vitus' Cathedral in the grounds of Prague Castle.
Below a butterfly , stuck on the inside of a glass barrier. I let it out and off it flew gleefully 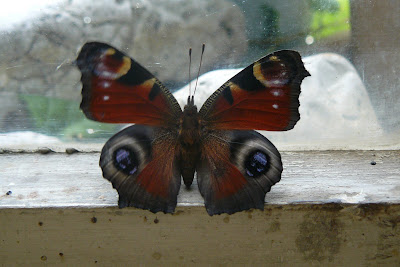 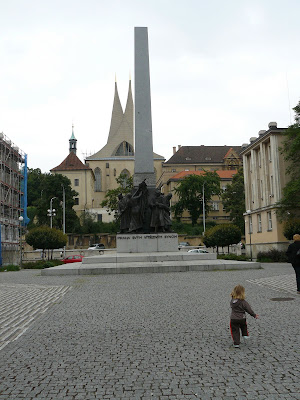 A wander round the neighbourhood takes me to one of the War memorials in Prague. This one , from WW1, when Czechs fought for the Austro-Hungarians. Behind it is Emauze, a churchlike building , its purpose I haven't yet gleaned.
below a close up of some of the figures gracing the base. Considering Wise Woman's thoughts on War Memes found in Aus, NZ and Western Europe this one appears quite 'ordinary'.
One thing about Prague is that it got hit by very few bombs, unlike most other cities in Europe which got devastated. Neither did the Communists touch the main city. Today the city abounds with renovation programmes, that's where the moolah is. 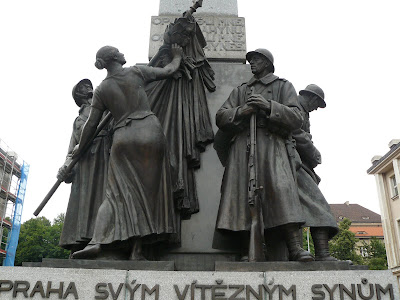 A lot of streets in Prague claim Checker-board status. Here a surgeon takes a walk in the early evening. Note he wears a resurrective green. 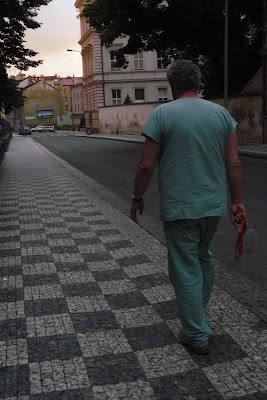 Finally a the Beaufort family tomb in the cemetary at Vysehrad [ Vishy-hrad = High castle]. I live directly below this spot, which , according to legend was 'seen' in a dream by Libuse [ Libooshe], a princess. She saw a great city on this spot so the tribe whizzed over here and began Prague, the Mother of Cities.
The alternative story is that she fancied a ploughboy from round these parts and used the dream to persuade the tribe to migrate nearer to her beau. 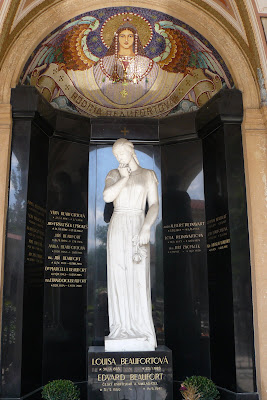 Posted by aferrismoon at 7:02 AM

VERY creative my friend! A very soothing stroll "in" my mind.

Thank you for sharing.

An interesting city you've got there - thanks for the dream-like ramble.

Apart from the ubiquitous erection, the memorial looks very tame. I have wondered if the bodies along the western front & their memorials have been used to create a 'manmade' ley line.

Wonder what the butterfly meant :)

Quite a random selection, of course the butterfly resonates with all the Monarch stuff, but it's very colourful and one isn't always presented with such a foto-op.
I think the warlike erections probably complement the vulvine graves
Prague is fairly soothing, lots of green spaces. I'll post one of the roads in the centre at the weekend, almost bare.
Perhaps take your stroll idea and create a synchro-pic story.
Cheers

Might just take a stroll on the weekend too.