Aha , the Pancake effect , due to subterranean movements and not aerial.
But, wait, no natural seismic events were reported that day, but some did hear a 'bomb'. 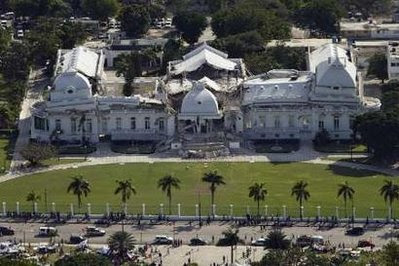 The serpent slews its way from the Solomon Islands in The Pacific twixt OZ and AM-Ericas. Its scaly form moves swiftly through earth's cavernous interior. Buh-Bango ,northwise the serpent hits Kali-Fawn-IA. EUREKA! Well the epicentre was 33miles from Eureka, acc. to the investigations over at DA BLACK WHOLE[DBW]
Both 'quakes hit 6.5 on the Chuck Richter. But the serpent hadn't finished, a last push undergrund, moving through the land mass to Haiti [half of Hispaniola], almost hit Port-Au-Prince. 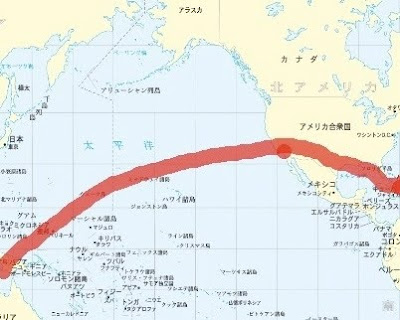 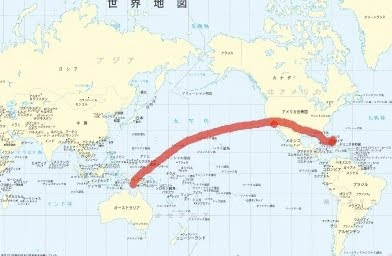 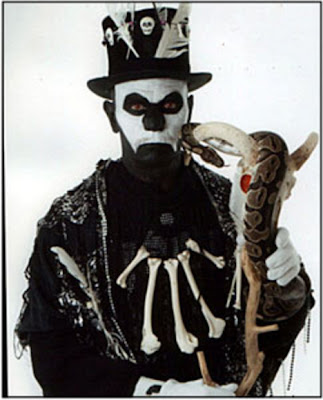 Baron Samedi, whom Papa Doc modelled his Voudoun personality after. 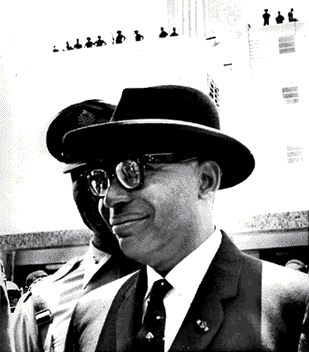 Haiti, the 1st Black Republic, secured after defeating Napoleonic forces just as Nappy proclaimed himself Emperor.
Haiti lived under 'Papa Doc Duvalier's oppressive regime from 1957 until 1971 and then until 1986 courtesy of son , Baby Doc, who used to drive on the only good road in Haiti in an impressively fast sports car of some descrip'.
Papa Doc used Voudoun in his regime to great effect. He held status as a LOA, a Voudoun priest-god, claiming that he had cast the spell that took effect one November day in Dallas, predating JSDownard's take on the ritual nature of the assassination. 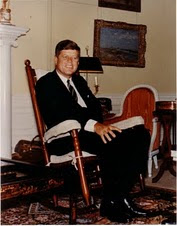 Who Do You Voodoo?

He awarded himself the title ' NAPOLEONIC ELECTRIFIER OF SOULS among others and menaced his enemies with the TONTON MACOUTE, who pushed the now de rigeur 'eyeless in shades' look that Security Services and celebrities seems obsessed with.
Black Shades mimic Baron Samedi's black around the eyes.
The Tonton were formed in 1961, their name originating from Haitian folktales concerning 'ogres' 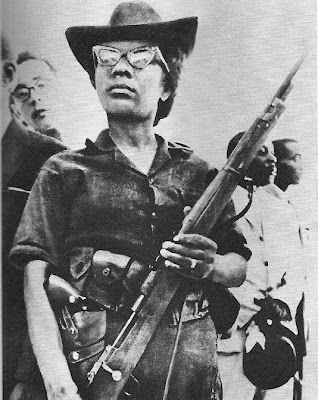 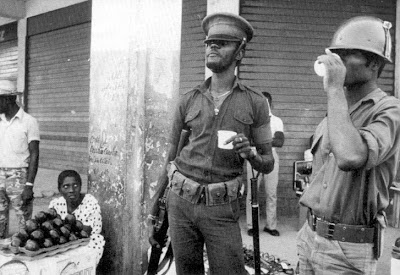 He hated communism which was probably why he stayed in office for so long, a bastion against Cuban influence in the Caribbean.

Voudoun , like any religion , we may use for foul or fair.Like the priests and experts of life's various facets things can get over-organised to allay seepage, though others may refer to 'seepage' as interaction.
I would imagine Papa Doc's use of Voudoun to keep in thrall the population used it for its less than beneficial effects.
Blood ritual brings assorted shadow-beasties and they don't always turn-up 'on time'. Nor do they do 24 hour cycles, perhaps not even decades and centuries. But they do come when called.

"You've got to pick up every stitch"
[Donovan] 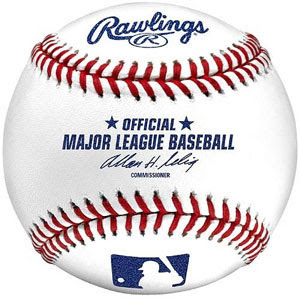 Haiti manufactures most of the Baseballs for the US - workers paid a pittance, which may be a reason for why so few can invest in safe building.
Geodesic domes would prove useful in earthquake zones as they roll, but t'aint no perjected urnings in that. They'd probably float too.

DBW picked up on the earthquake phenom in a post presciently titles ' FIRING UP THE REPEATERS' which reports on the quake in the Solomons .[ Howdya know the 'quakes'd repeat?]
"The quakes occurred at depths of between 33 km (20.5 miles) and 36 km and Gizo police earlier said possible tsunami waves struck uninhabited Tetepare island, home to a nature reserve."

The reason for using the word 'repeaters' came about for the use of a passage from HAGGAI 2 in the previous post EXILARCH IN BABYLON.

" Last outing we ended with Haggai and, trusting god isn’t offended and you aren’t bored, we repeat.
In a little while I will once more shake the heavens and the earth, the sea and the dry land.  I will shake all nations, and the desired of all nations will come, and I will fill this house with glory,’ says the LORD Almighty.  (Haggai 2)".

The last episode of LOST had Juliet setting off an Atom Bomb called JUGHEAD on the series' fictitious island , which I believe moves around the South Pacific, Solomon Islands way. 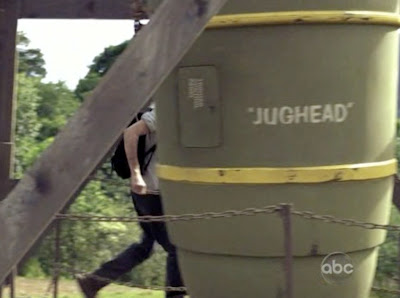 'Repeaters' was writ on JAN.5 , before the Cali and Haitian 'quakers.
Manson drew serpents curling around a murky America - ' though you rope Amrique your home ruler is Dan' - FW, p.133 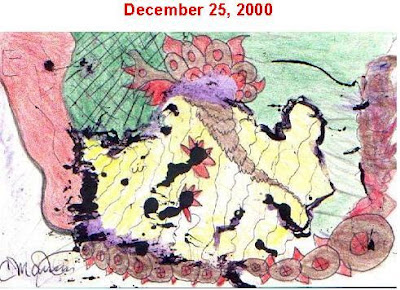 Could be Khepera came up, its nocturnal scuttlings underground preceding dawn. Bringing the sun, or something, from East to West. 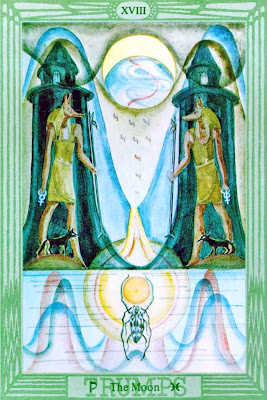 Though I reckon this was the thing sub the Twins, that left the glow in the foundations. 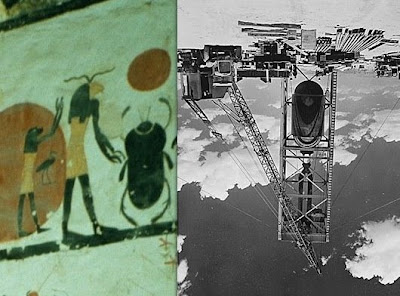 Maybe minions craft some techno-artefact to which we are not privy. P'raps still playing with atoms or the effects of bomb-tests from years gone by, how do say? AfterShock!!!

Of course the benefits go to the Building Industry who can replace last time's shoddy work with some more concrete crap that'll fall down next time Leviathan decides to keep an appointment.
Odd that so much gets spent on restoring old buildings yet so little on keeping our homes from falling over.

LVYThN = 496 which also enumerates MLKVTh - Malkut - Kingdom, Majesty, Royalty and esoterically the title of the 10th Sephira on the Tree of Life

From the comments section -


what are the "natural" chances of that? astrobombical, baybee
Posted by aferrismoon at 4:02 AM

Synchro-funnily I've been doing some explosive pacific digging of late.
I recall reading a NZ 'theoriser' saying that a French nuclear 'test' in the Southern Hemisphere set(h) off the eruption of Mt Ruapehu in the North Island of NZ in 1995.
The world is one entity, I don't think we can keep isolating events to the location of their 'eruption'.

the Red Line arc you trace from the Solomons to Eureka to Haiti resembles the twin-stiches on the baseball, and Manson's serpent winding around the u.s.

note that in the drawing, the largest (and thus primal or generative) "bone-ring" segment of the beest is located approx at Haiti, locus of hocus pocus

"But, wait, no natural seismic events were reported that day, but some did hear a 'bomb'."

Sirius is binary and sororal

Mumbai and Haiti are tessellate and spiritual coordinati, so receive their double portion


what are the "natural" chances of that? astrobombical, baybee


yr great shot of Baron Samedi (samael jedi) remimded me of the voudoun guede, which of course recalled RUdy ("Lake") Hermann Guede, who features in my rumniations on the Zodiac Killer's Lake Herman rite-site

the Guede are the voudoun "spirit family" who embody death

"I'm an extra-terra. I'm from alien earth who must be called human people.


voodoo has no redeeming aspects dear AF, these are locales and beings of vampiric NRG, taking big hits

"Manson drew serpents curling around a murky America - ' though you rope Amrique your home ruler is Dan' - FW, p.133"

purty sharp JJ eh eh? yes it's Dan, "a serpent BESIDE the way" as along the Amerique borders in "Christmas Day 2000"

like Manson's basilisk, which rises from S. Carolina (Charleston/Comumbia) to rule from the north, Dan was "israel's" most northerly tribe

obviously their influence, if not dominance, was/is hidden

the Danite mark in recent history clearly traces out, from the B.E. India Co to the Founding of Columbia to the Johnson/Bush johannite/frat regime, to the 20th century drug-ghettos and blood-oil barons a la Daniel Plainview

another bingo outta JJ via AF, cheerio both

Cheers Alex. The world does appear as one entity yet we have the ability to 'ignore' parts of it as if it were another entity, which some of us then attack or leave to desperation.
Not only isolating the event to one location -- I also think that we localise the time of an event often giving it a duration that might not fit with reality.
Of course its arch-conspiracy but perhaps the majority of eVents have been 'constructed'.

Dan keeps coming up - I see Newspaceman has DAN and the LYONS post about Glaswegian gangsterism.

'Though u rope Amrique....' also links to the Zionist influence in the states and the country to which they prove loyal

Papa Doc didn't care about communism - he cared about race, in a very twisted way. He envied the whites and feared them. The blacks were fair game, subject to every cruelty imaginable. There were virtually no communists in Haiti (or the rest of the island) but it suited both Duvalier and Trujillo to pander to US paranoia about a 'red menace'. The real menaces were the two psychopathic dictators, propped up by US dollars and Special Forces.