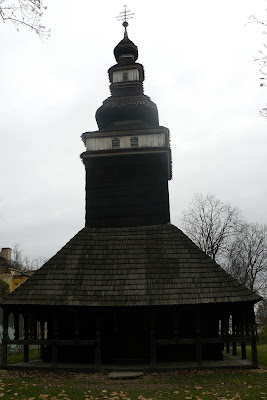 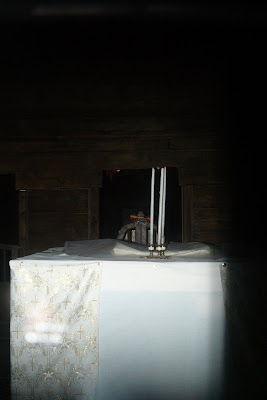 ...decided to flow on from the FlasHHeart stimbols , to wit the last 3 posts and a couple from Hidden Dakini - Happy Halloween Again and Heart Shaped Rock.
On Monday the 17th [ State holiday celebrating the Velvet Revolution , 1989] went KINSKEHO ZAHRADA [ Kinsky Garden] a wooded spot in SMICHOV [ Smileville] , in central Prague. Below fast-flowing water. 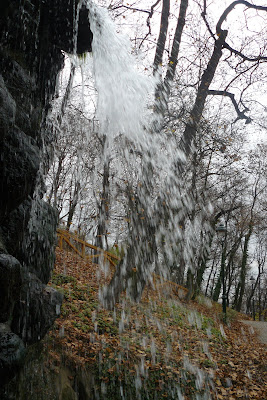 Filled this pot which I got from NEWSPACEMAN - it reads -" MAGIE , Jet Stain" , and further to the base - " Magic Polish'. 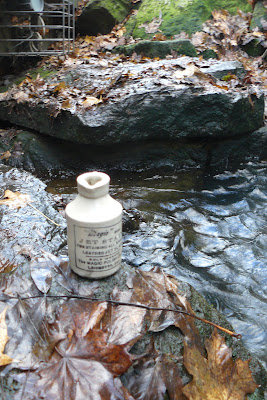 Wandered further on and came to wooden church which was moved here from Karpathia in 1927, and has just been renovated and filled with religiosity. Took the pics through the grilles on the window. 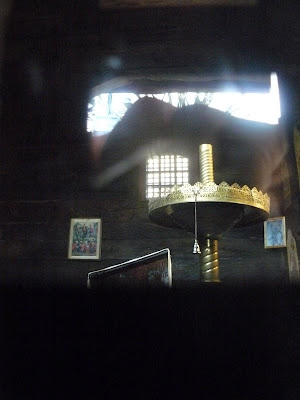 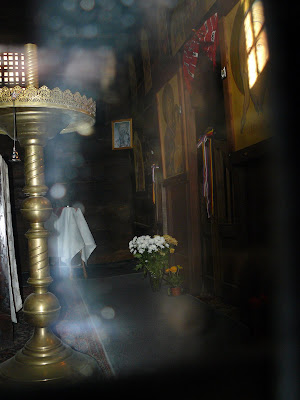 here's a montage of pics - The Lamppost comes from Prague, the arm with Heartstone, and the background pic of trees from Hidden Dakini and the Lightning-Struck Tree from Stygian Port's 'America's Fall from Grace' 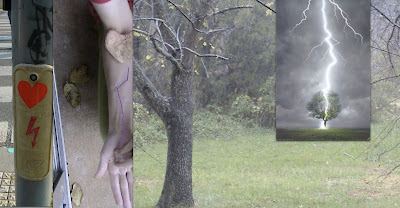 The water I got for the paint with which I tendered a resonant glyphette upon my arm, a response. Went with Green for the Heart [ Feminine] and Red for the Flash [ Male] , while the Crystal = hermaphro as it contains both nergies. The crystal looks phallic but the hands shape lends a Yoni to the proceedings. Behind the colours on the DOOR synch with GREENHEART , REDFLASH and WHITECRYSTAL 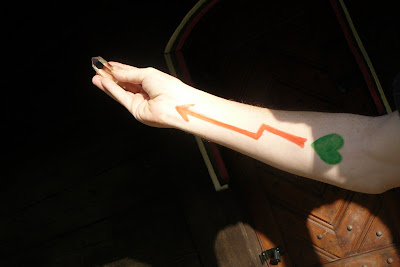 HD had sent this fotky. her hand upon her Heart , a worldwide sign for 'Hello' In mu last post I [ which included the foto] I posted a pic of Theda Bara, who I noticed also had her hand on her heart while rising from a skeleton [ a symbol of the brittle , redundant beliefs and habits, the box or eXoskeleton of the Beetle] 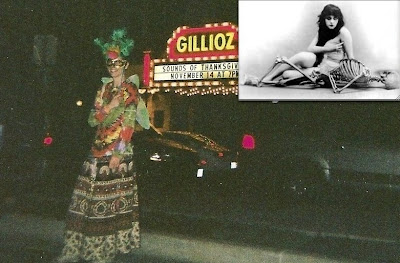 So I extended this vis-conneXion into the rootuall, by placing the crystal on my heart, which for me 'grounds' the atomic NRG that I'd been writing about. Surrounded by trees , grass, water, earthenware pots and wooden church [ dedicated to St Michael], the grounding went fairly easily. The 'grounding' acknowledges that in blog-space things can get a little 'airy' 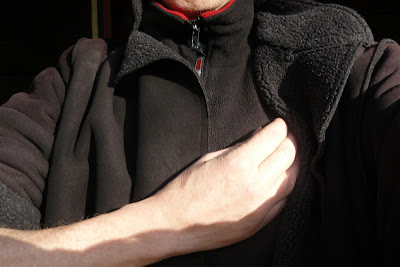 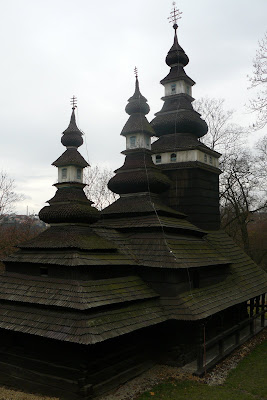 THE TRIPLE FOOL.
by John Donne

I am two fools, I know,
For loving, and for saying so
In whining poetry ;
But where's that wise man, that would not be I,
If she would not deny ?
Then as th' earth's inward narrow crooked lanes
Do purge sea water's fretful salt away,
I thought, if I could draw my pains
Through rhyme's vexation, I should them allay.
Grief brought to numbers cannot be so fierce,
For he tames it, that fetters it in verse.
But when I have done so,
Some man, his art and voice to show,
Doth set and sing my pain ;
And, by delighting many, frees again
Grief, which verse did restrain.
To love and grief tribute of verse belongs,
But not of such as pleases when 'tis read.
Both are increasèd by such songs,
For both their triumphs so are published,
And I, which was two fools, do so grow three.
Who are a little wise, the best fools be.

...who B Liberty?
[Wen over to Tod's [at Through the Looking Glass] post - 'Transition to 2012' and filched this foto, though cropped, cheers]
Posted by aferrismoon at 1:06 AM

Just Wonderful! For a little extra flavor--there's a green heart dyed into the center of that shirt <3 I'll go snap a better picture of it to post. Maybe America falls from grace into gracias...viva América! :D

What a lyrical post.
I agree that the blogoshere can get airy, the grounding was a great idea - behold the hand that forms the 'lyrics'.

that was a nice little journey, its funny i use airy to describe the internet and stuff as well, very cool idea, b-well

Funny u should say that Mike, as I may take on the dehabitualization would be decline og GROUNDHOGGING. E.G : Not having to take part in boring , repetitive work , routines . Give them over to machines, let's live unfettered.

Jenn - was thinking thatinstead of Black, White , Yellow being 'races', they should be called GRACES, and then we cann permanently live inthat state of Grace . Look forward to the Greenheart

WW - have noticed a few blopsyhcesgetting 'fraught' and 'strained' at times. So thought I'd take something away from it and plant it.

Indra - air proves fantastic for floating and flying and jetting though at times boundless and unfocussed [ or so many different foci that everything seems the same. A river that breaks its banks and just hangs around , covering everything.

I have always enjoyed Aferrismoon. I haven't been over here in awhile. I love the images you come up with too along with the conetent! I hope you don't mind if I added Aferrismoon to my blog's RSS feed. My blog isn't along synchromysitic lines-I am just in awe of the work you people do. The FLT 191 pic has a personal synch for me as my thoughts about that flight start a book I am trying to write about my life.
Best to you!-Devin

Feel free to delve in, Devin.
The Flight 191 interests me as there are 3 or 4 other plane crashes with that number.
Considering the whole 911 'rabbithole' shebang O'Hare seemed a worthy highlight.

Indeed about the FLT 191-some close relatives of my fathers were living very close to DFW when the L-1011 (i think it was) crashed in Texas in 1985. The reason I came back was to thank you for your comment. Plus I also wanted to say that the Czech Republic(i still want to say Czechoslovakia) i still remember Dubcek,Husak, and Vaclav Havel-I think Kundera comes from your nation-must be one of the most beautiful nations on the planet. I had traveled in Europe some in 82 and 95 and regret never having been there-especially as my days of journeying are over. Peace and be well!-Devin

"Indra - air proves fantastic for floating and flying and jetting though at times boundless and unfocussed [ or so many different foci that everything seems the same. A river that breaks its banks and just hangs around , covering everything."

Jeho Hi, aferris-hope I said that right! On a weekend note of silliness could you go to my blog-even if it is just for a second so I can get the Czech Republic flag there? I tend to be an obsessive-compulsive (as if you couldn't tell) and I used to collect foreign currency and stamps when I used to have money-now all I can hope for is to collect foreign flags at MFM! Peace and best to you-cant wait for your next post-
blessings from "Phoenix"-Devin

I think I messed up as usual-aferris-I think I meant to say dobre rano if you get this in the morning or dobre den -formal?
or hejsa very informal-?
Peace -Devin :-)