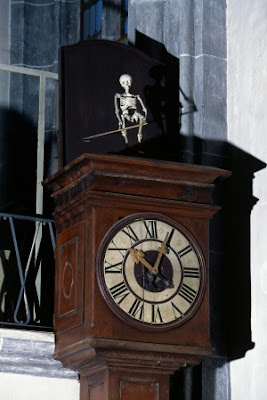 Bouncing off The Daily Behemoth's story about the 26 deaths [ probably mor] from a coach crash. The Travellers were on a pilgrimage to Altotting in Bavaria to visit a Black Madonna there.
There is also a clock there called the Death Clock, atop stands a skeleton with a scythe. Acc.to legend the clock would ' knock' before an impending death though this has now been attributed to the behaviour of a type of Wood-Beetle.
Pope Benedikt XVI was born in the Altotting region, in a village called Marktl in 1927. He visited Altotting last year and spoke of his thoughts on his death. This was reported in an article in Spiegel Online - 11/9/2006 headed ' Papst denke an seinen Tod' - Pope thinks of his death.
XVI = The Lightning-struck Tower in Tarot[ Book of Thoth] or The Empress[ Sepher Yetsira]
Posted by aferrismoon at 6:15 AM

I tried but cannot speak German, if that is what it is.