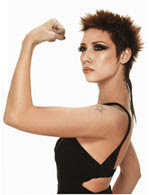 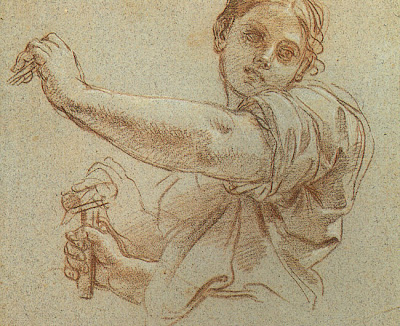 This story [ see Tent-peg to the Temple] elicits a lot more than meets the first 12 readings.
In the verse preceding Sisera's transformation he says :
'And if any ask is there any man [AYSh 311] here thou shalt say NO!'
Then 'he' is 'killed' by Jael. If Jaels tent-peg to the temples is the penetration by AinSvphAur then perhaps 'he' becomes 1 with 'his' feminine who like Woman[AShH 306] giving the apple to Man[AYSh] in the Garden of Eden has to act as a conduit of universal energy. And so, NOMAN is here.
Carlo Suares wrote that the Male is in a state of instability and cannot accept information without its mediation through its female. [ I won't pretend I 'know' what that means]
When Jael kills Sisera he is lying down, asleep, and she impales him through the temples into the ground. In the poetic version , Chapter 5, he is described as falling, bowing then dieing. How he does this asleep beggars belief,
Many of the male elements in the bible seem to be in a state of shock, numbness, coma, etc.
SYSRA[331] - acc. to Carlo Suares the S - Samekh [60] are the female equivalent of V -vaw [6] , the male copulative element. Thus a womb which, with this penetration, expresses the movement that YShRAL[541] requires to throw off the yoke of Canaan.
SYSRA - YShRAL , the 2 wombs [S and S] in Sisera will provide a movement to both the physical and psychic nature of Ysrael.
In both words the letters Y,R & A are shared thus with the penetration and opening of the 2 wombs come forth L [30] and Sh[300].
The 3s = movement G the movement of every A in its B.
Gs projection into the existential dimensions emerges as a controlled movement - L
Sh = the Cosmic Breath , the great movement that fills the cosmos[ physical universe] and our mind[s] { metaphysical universe]
Deborah lives beneath a palm-tree in the hills of Ephraim [ APhRYM 331]
Jael lives in a tent and transforms Sisera { SYSRA 331]
Posted by aferrismoon at 7:27 AM

So, 2 minutes left for him,taking his entire life as 24 hours. It would be some sort of ratio/theory. As time deminishes, your time here increases - like a number squaring and yet being squared - in perfect harmony. But maybe most of us waste it ?

If the clock is correct. Also, curiously, it seemed to me that all our clocks went wrong by three minutes earlier this year ?

As life span diminishes so the remainder incorporates all of that life used into its here and now, so the last second of life expands into a seemingly enormous duration
By clocks going wrong . do u mean just British clocks. And why 3 minutes? If u have expalnations thta can be transformed into a literary form
Cheers