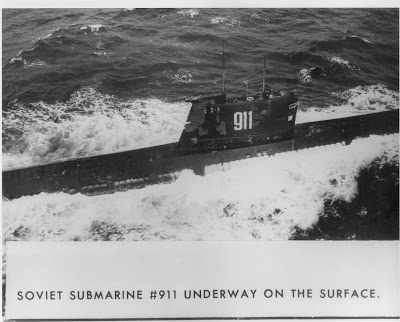 In Oct 1962 4 Soviet FOXTROT class [diesel] subs left Murmansk for Mariel in Cuba. Unbeknown to them the US had recently set up a Submarine tracking system called SOSUS which picked them up mid-atlantic and tracked them until they felt the need to get them to surface. The US succeeded with 3 out of 4, The 4th apparently hid within the noise of the Aragon, a Liberian merchant vessel.
Photos were taken of the subs and one had the Conning Tower number 911.
Posted by aferrismoon at 5:49 AM

Hmmm, interesting find my friend. I was trying to make some links to the movie Firefox (with Clint Eastwood) which deals with thought controlled fighter jets and the Soviets during the Cold War era. Check into that!

Yeah Firefox. I saw it many years ago. So will check it.
There's a great comics blog called DIAL B FOR BLOG , if you're into comix. It excels
Roger and out