A Tent-Peg to the Temple 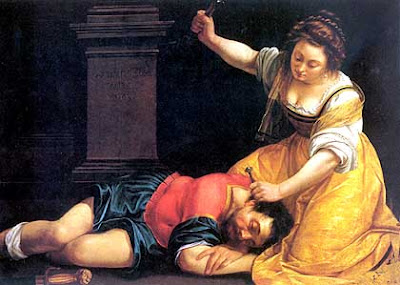 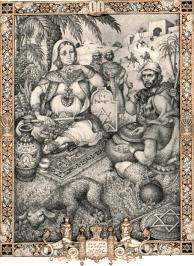 As the bees begin to mass and swarm despite their forthcoming extinction I slipped back into the Torah & KJV to Judges 4 & 5 where Devorah decides to off the Canaanites.
DBVRH 217 means 'bee' in Hebrew . In the illustration above she sits beneath her palm-tree which is where she lived.The eponymous heroine rouses Baqr to fight the Canaanites. An exchange takes place - Bakr says I will if u will, Devorah replies , well I will if u will
So its agreed lets go and take out Sisera, the Canaanite kings general. Fine. And that's Devorah's lot, she doesn't appear again. perhaps she toddles off with Bakr, the KJV doesn't say. bakr definitely fights Sisera's 900 chariots. Sisera escapes and on his flight comes by the house of HBR [207] whose wife Jael JOL [110] invites him in. He accepts and asks for water. She gives him milk which he drinks. then she gives him a rug and he drops off to sleep. Jael , with a hammer [MQBTh 542], then drives a tent-peg [ YThD 414] through his temple into the ground. Do not go camping with Jael! She meets Bakr and tells him that she'd sorted him out and the story ends. That's Judges 4 which is written in prose , Chapter 5 tells the same story in a poetic style.
JOL means chamois or mountain goat [ yes another name for a goat]
I decided to look at the numbers to aid in innerstanding this passage and chose to start with Judges 4, 21 which relates the tent-peg to the temple incident.
JOL AShTh-HBR ATh- YThD = 110 701-207 401-414 'Jael the wife of Hebr the tent-peg'. Excluding the 1st word these are the next 5 formulae.
207 = AVR - the balanced light of day
414 = AYN SVPh AVR [ 61 146 207] - the limitless light
Note>>> 61+146=207; 207x2=414
The wife of light penetrates the temples of SYSRA 331 Sisera with Ain Soph Or , the 3 nothingnesses that encompass the Qabalistic Tree of Life. Now the story transforms from a killing, to the penetration of humans-in-time with the Ayin Soph Or [ which I won't attempt to explain] that penetrates again into the Earth. Linking HuMan to the Light and the Earth, transcending time and space yet grounded and thus comm-uni-cable. How disastrous that most of humanity [ who read the bible] be left with a war and the glorification of woman as a sneaky femme fatale [ the killing justified or otherwise]. The translation leaves woman devoid of compassion and the man as gullible. The Israelites are again degraded to mere land-grabbers, by any means necessary and this raises its head in the stereotypes of Jews as ' sneaky'. In the following chapters Samson as psychopath tends to hammer home the idea that the Israelites are murderous, untrustworthy and wholly for gain.
Sisera's sleep is the word NRDM and the sleep of Adam is TRDMH [ translated as 'dropping off' and 'deep sleep']. In Adam's sleep occurs it's discovery of its female and consequently its maleness. Sisera's sleep [ a man unlike Adam hermaphrodite] awakens his consciousness to Universe . Adam awakens to find that it is now Eesh and Eesha. Sisera is transformed by the female Jael and they connect with the tent-peg driven joining man and woman-light and earth and if we return to the war story the 2 sides of the war.
The Hammer = 542 and the peg = 414. 542+414=956. 9 stands for foundation ; the 9th Sephira, Yesod ; 56 = YVM= day.
The Light is grounded, earthed [ like an electrical charge] and day dawns.
Both 217 - DBVRH and 331 SYSRA [ Sisera, the one killed] are centred heXagonal numbers, 331 is also a centred pentagonal number. A 5=6 Ritual? 217 = 7x31 and 331 = 59+61+67+71+73 [ % consecutive Prime numbers]
On Jake Kotze's blog Mark LeClair [ I think] comments that the WTC aerial view looked like a giant 3-pin plug.
as to the disappearence of Devorah, she reemerges from the belly of the Lion killed by Samson bringing the light to humans in the form of food and physical sustenance.
Out of the strong comes forth sweetness
Posted by aferrismoon at 6:07 AM

Could this be a glyph for 'Da Qween is in Da Howse'?

Gnice 217 find and bees in my bonnet
Da Qween is in da house ; u might have to enlighten me a little though it makes me think of:
The King is in his counting house
Counting out his money
The Queen is in her parlor
Eating bread and honey
An explanation of this as a 'secret' pirate song lurks at
www.snopes.com/lost/sixpence.htm

Or Anne Bonney (Bonet?) the most famous of the female pirates...