The Slumber of the Fleeced

1.On that grave morning 10 years ago, he had already encountered one terrifying shock: His 14-year-old grandson was hit by a car while he was biking to school. Beckwith rushed to the scene, fought his way through a crowd, and waited at the boy's side for the ambulance to arrive. A short time later, he stopped home on his way to the hospital, heard the news on the radio about what was happening at the World Trade Center, and turned on the television.
{ NB - despite his grandson's accident he was still entranced by the magickal events on the televiiiiissssiiiiooooonnnnn! }

2."I heard a small plane went into the tower," he says. "I'm looking at this and the smoke on the upper floors, and then the wind took the smoke. I said, 'Well, that's a bit bigger than a small plane.' ... I couldn't understand what was happening."

3.Less than an hour later, he was in the emergency room in nearby Mineola, glued with others to the TV. That's where the former firefighter, who had been retired for seven years, watched the south tower collapse. From that hospital, where it appeared his grandson was going to be OK, he knew where he needed to go next.

4.At first, his six adult children -- and his wife -- refused to let him go. By Sept. 13, his fierce will had won over their protests. A former union leader of his, Jimmy Boyle, had not yet heard from his son, Michael, 37, who was also a firefighter and had not yet been found in the rubble of the toppled buildings..

6.Dressed in some old FDNY gear, he managed to bluff his way past the blockades and barricades into the wreckage area, and started first on a bucket brigade, and then searched, alongside other firefighters, for missing persons.

7.Hours after he and some men had unearthed a fire engine, they tested its stability, and a Secret Service agent ordered him to help the next man who came through up onto the platform. "You do what you're told when the Secret Service talks," he says.

8.That's how he found himself offering his arm to President Bush, who joined him on the truck and who insisted that Beckwith stay put rather than climb down as he had  been told to do by the Secret Service agent."

First paragraph - his grandson is hit by a car who , after getting through the crowd [ so how did he know it was his grandson? ] he stays with. His 14-yr old grandson is injured and he's the only family member there but he doesn't go with him to hospital but 'stops off home' first He then stops off home and sees the television.

As there are 100s of stories like these there's no need for the writer's point-of-view to back up parts of the story with any evidence of said event happening. Few are going to question how a retired firefighter rushing to his grandson's accident got the info, or why there's no mention of parents etc. nevertheless the necessary holes would , doubtless, get filled in should an investigation be mounted.

Second paragraph - garbled stuff about ' the wind took the smoke…'. The bit about the 'small plane, which he wouldn't have 'seen' on the television as there was blanket coverage of jets flying into the WTC.

Third paragraph - He's been home , seen the TV and a building on fire. If its the first strike then that happened at 8.46 am. He's at the hospital for the South Tower collapse at 9.59. I don't know the distances but I'm wondering what the traffic would have been like at that time due to the emergency services and confusion from the attacks.
Anyhow his grandson quickly recovers and grandad is inspired to go you know where.

Fourth paragraph - he argues with his family for two days and then spurred on by the knowledge of a former union-leader's son not returning from the rubble, he goes off to find him, 2 days later.
The lost firefighter is named as Michael Boyle 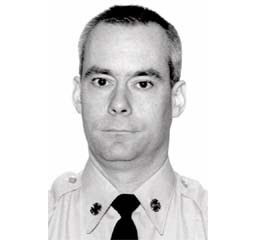 "He was off duty the morning of Sept. 11, but Michael Boyle, a firefighter with Engine Company 33 in Manhattan, jumped on the truck anyway when the alarms sounded." { That old 33 makes a brief appearance, gilded digit of conspiracy that it is }

5th paragraph - someone contacts him about one person, I assume on September 13th, who is lost at the WTC, that someone being a member of a fire-team, who are apparently there and perhaps better placed to search for him than a lone-retiree.

6th paragraph - that is a lone retiree with old fire uniform, as in not the uniform they use anymore, who then proceeds to 'bluff his way' all the way to the site. 'Bluff his way' - past whom - other fire-crews, security officials, police.
What did he say -' I mislaid my firetruck / I came directly from home….' What possible excuse could he offer to get into a secure site [ if it was]. Guess the security was as useless as at the airports!

7th paragraph - ' He and some others 'unearthed a fire engine' digging out with their barehanded possibly and some buckets. He's then told to help the next guy on to the 'platform' which may be the now-stable 'unearthed fire-engine' though from the picture the iconic photo-op of the once-buried engine, with a roof still flat enough to stand on, didn't get taken. Probably because they did not unearth , nor are they standing upon, a fire-engine. None of the other 'firefighters' appear to be in uniform either. In fact most, but heroic Bob Beckwith, appear in recently washed and ironed office clothes - note the guy in WHITE, at a building site. 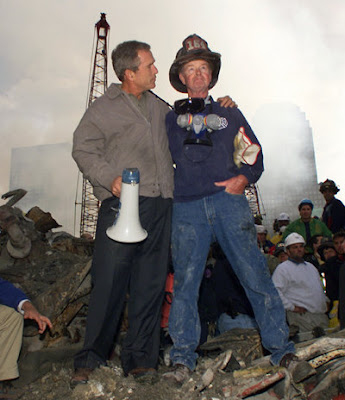 Pictured in his old FDNY kit - ooops! Unless they used to use jeans

Ok so there's some red colour there so I guess it could be a fire-truck , but its hardly 'unearthed'.

Clean helmets and clothes - thus unlikely it is a spontaneous gathering 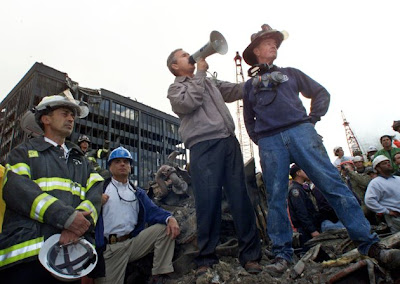 
Photos are the pics that spout a 1000 words. Coupled with some attempt at writing called 'journalism' propaganda poops forth.

From the 'Relief of Tripoli' recently played out via the earnest voices of on-the-spot reporters from the BBCNN Truth Team. Somehow in the midst of war some media-fluent 'rebels' cobbled together the 'FANTASTIC FOUR' placards gigantic. Perhaps the connexion is that the film Fantastic Four bombed.


The pic below is outrageous, so obviously staged, sp pathetically crass.

The close-cropping of nearly all the photos belies investigation into the context [ i.e. film studio or outside location belonging to the propaganda people]. Excuse - we wouldn't be able to express the emotional imapct blah blah blah nor win Press photo of the year awards etc etc 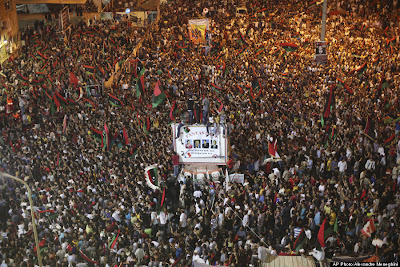 It reads: " God Bless You All, Thanks For All"
It uses 5 colours implying full-colour printing , studio, printing onto large-dimension paper.


Also there appears to be a flag-making factory somewhere about. 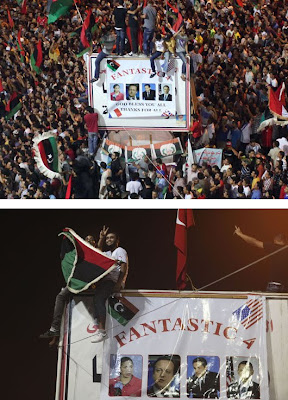 Susan Rice , on the left , thinks it GOOD for Libya to change their regime with the help of NATO but she thinks it BAD for Palestinians to have any statehood whatsoever 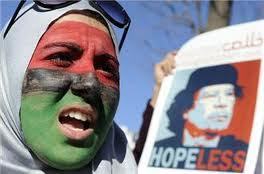 People who wear national-flag make-up on their face are to be considered along with happy football fans supporting their national, democratic team. Note also the , again, media-fluent in-joke poster printed up somewhere and flown in while all public utilities are slowly bombed into disrepair. Again copious amounts of face-paint to be found while out shopping for freedom.
Nev'theless this photo could as easily have been taken in Arizona where the large military training and propaganda-engendering base is situated. here they film what you need to see on the telly.

I fail to see for what benefit wearing this make-up is except for impressing their allegiance to foreign journalists. 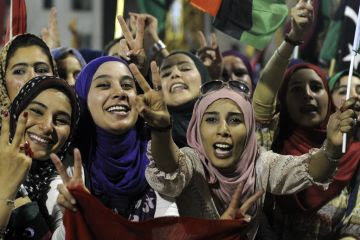 " Ho Ho Ho Hee Hee Hee We are oppressed, set us free "
As is typical with these co-ordinated spontaneous movements , the omnipresent V-sign, here touted by Libyan women who , as well as demanding freedom also demand freedom for women [ acc. to the western media], which , of course , freedom on its own can't supply as it includes men.

Anyhow they look jolly well fed, in this photograph of students at 'The American School' in Libya , where they are gleefully taught that they don't have as much as……… 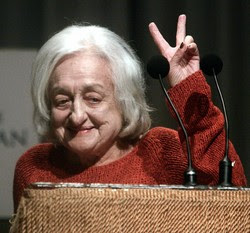 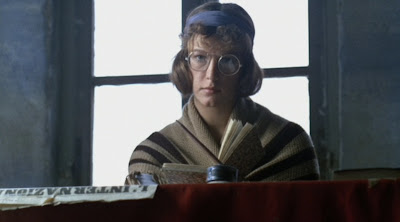 Perhaps these 'Moslem' women ought to know that their 'peace' symbol has its contemporary source in the V for Victory/Victoria as promoted by Winston Churchill in WW2. 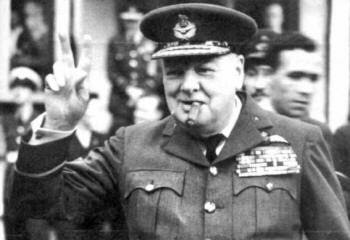 Allegedly Crowley suggested this symbol to combat the Nazi's use of the swastika. The V-sign being the symbol of Apophis/Typhon , the Destroyer.

This was a big laugh for the underground , in-the-know, magickally-oriented intelligence services masquerading as the 'peace' [ and affiliated ] movements of the 1960's , where incidentally came the epithet 'Days of Rage' , directly connected to the burgeoning generation of Chicago-based politics with its now-figurehead Barack UberMa, and other well-off 'revolutionaries' who, now having accessed 'temporal power' proceed to tell the rest of the world how live democratically, or freedomly etc.

The 2 digits out, 3 digits in, acc. to Robert Anton Wilson related to the number 23 and this in turn corresponded to Hexagram 23 , which has the title ' Splitting Apart' [ acc. to some translations].

And this is what proves to be happening in the localized, to mostly Moslem countries, revolutions. Its not revolution , its breaking or splitting apart. Libya already a morass of factions striving for supremacy in a power-vacuum. The big carrot being the millions in frozen assets that the next incumbent[s] of "Lib[erate]ya" will happily access for them and their supporters.

The V-sign may be 'short' for the full-body symbol of 'Apophis' below. 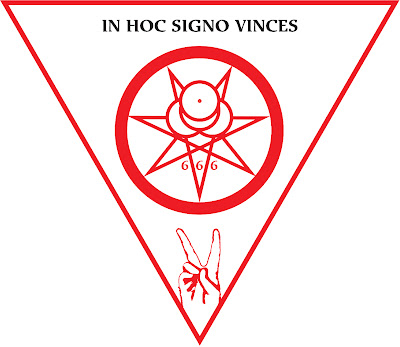 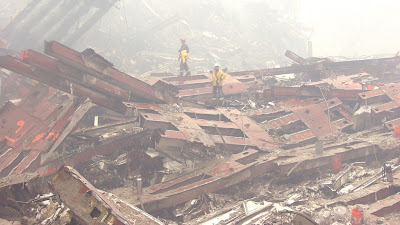 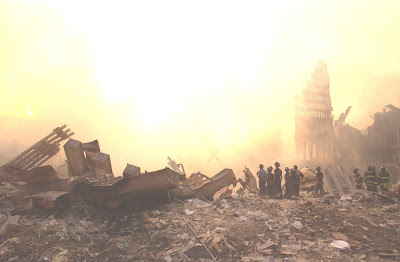 Ground Zero marks the site of an atomic explosion, always!
Posted by aferrismoon at 1:54 AM 15 comments: