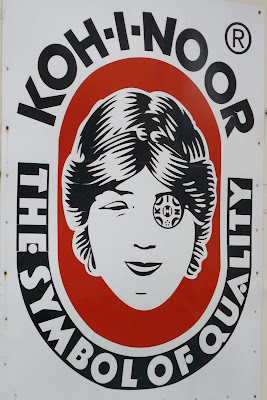 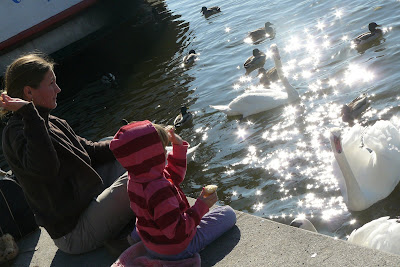 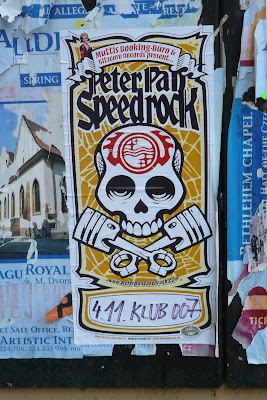 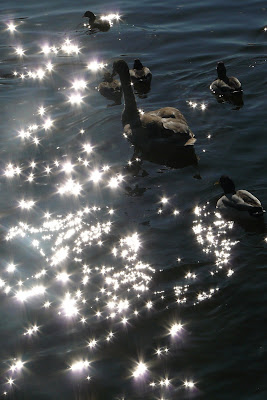 the bright autumn days provide for wonderful photopportunities. I also include the logo for Kohinoor which makes things like buttons, zips, pencils - for Vapos R/B/W musings.
The Nobel Prize people in their ingenuity have changed the word meaning environment for the word meaning peace. As if recycling will cause peace. Usually peace prizes go for those who attempt to stop wars, you know , when they get imprisoned , shot at, family offed etc.
I'm surprised that the Nobel Committee should accept one-sided unfinished research - from dumbing down the US to the whole world, all rather predictable. Notably a British Judge has not. The Ministry of Insulting Children's Intelligence decided that all schools will watch the Gore Bore, but MUST tell the children that this is not the only view.
Prague will be invaded by Greenspan and Cherie Blair in a couple of days, plus a couple of corporate greeners. It's possible that the EU will change the presidential rules in 2008 . At present an EU member state provides a president every 6 months, now they want an incumbent. The 1st incumbent, long-termer might take his place in 2009 when the Czechs representative should stand. As Tony Blair is likely to be UberEuropemann his wife has probably come to do a little charm offensive. The Czechs are already miffed at having this radar which just makes difficulties with the Russians.
Well the sun shines and its half way through October, crisp, clear weather, lots of light , keeps one intelligent, freedom for Melatonin.
I had a dream with Putin in the other night, though he had a Teddy-Boy quiff. We chatted in a room with a large Bay-window. The next day rumours of an assassination attempt when he visits Iran next week surfaced.
In a CSI episode { Las Vegas} called GO TO HELL the opening scene was of a bee flying for a bit then dying. Michael from Lost was a preacher who had to exorcise a 12 years girl. In the wall of her room was a beehive. At the end Grisham picked up a dead bee and talked about the disappearance of Bees , etc etc. The Bees had NOTHING to do with the story at all. and got inserted into the beginning . middle and end perhaps only for the CSI producers to make people aware.... ? I believe Las Vegas = The Meadows which is generally where bees hang out
The Peter Pan Speed rock uses a company logo that I recognise but can't remember whose, as a flying eye, which reminded me of the stars on the river
Posted by aferrismoon at 7:33 AM

Interesting. I had a lucid dream about a couple of Russian guys in my apartment not too long ago. Totally random ...The photo of the ducks is one to dream on Mr. Moon.

Hi Hoi, I managed about 10 shots. I looked in the viewfinder and thought - nice, but I'm sure they won't come out on the photo - but they did.
The Russians are going to test the Americans all the way - The Radars, the planting of a flag under the Arctic, the 24-hour Bomb carrying missions
Brinkmanship.
No doubt they invented the Putin assassination story but made it look like it came from the US
Ciao 4 Now

Hiya aferrismoon, koh-i-noor is also a famous diamond, currently with the crown jewels, in a tiari, I think.

There are various legends around it, I have attached the wiki link, the links at the bottom of it are also good.

Hello Moon ~ Thank's for putting that post up.. I was kinda getting stuck as the R/W/B project I am working was sending me into overload..I let it go for a day and wahla.. the Moon cleared my mind and and now I can get back at it :) Last night I was just thumbing around the Tube(TV)and(this always seems to happen for some reason)I clicked on a movie called Formula 51..holy sh..t! Blew me away.. not that its a great movie but the whole thing is based on R/W/B..big time!

There has to be something about 51..haven't had time but I find it strange..Area 51, Formula 51..I have a feeling there is something there.

Anyway I will cut it here..thanks again for the post..sometimes its just little things/thoughts that open the door.

I found something you might find interesting and will try to send it to you.

Koh -i-noor means Stone of Light I have heard, relates to Eleanor.
RWB is kinda phonetic for Rub-y. I shall have a peek at F-51 if poss.
51 = 3 x 17
I got the TubeTV , its really saved me, makes life far easier.
Thanks to those guys whom I can't donate any money too. Thanx.
Many Thanx for the comments, sorry mine are so few and far between.
All the blest

The number 51 is the number of the binary star Sirius. Sirius A and Sirius B take 51 years to orbit each other. Modern astronomers found this out in the 1970's, but the Dogons already knew this for thousands of years.

Btw, I have a new article at my blog "The Meta-Logic Café", at metalogiccafe.blogspot.com

I have yet to see this CSI episode but given the work of Kotze it certainly sets off the old BUZZ meter! Excellent as always Moon

I saw that episode of CSI. It made perfect sense for the bees to be present, since bees are reknown (within some circles) as being the Devil's little workers.

Seriously. Ever see the movie "Candyman"? Bees all over the place. Candyman himself had a whole beehive inside of his chest.

It all goes back to Greek mythology, I believe. Zeus was known as the "Bee God", and he used the bees to defeat his father Saturn.

No coincidence then that bees are "disappearing" (hiding underground rather) now that a gigantic, hyper-dimensional HONEYCOMB appeared at Saturn's north pole.

Wasn't Eleanor Roosevelt the one that Hillary Clinton "spoke" with frequently in the White House when she was 1st Lady?

Not much that I can add, other than praise yet again. Great photos, connections, Etc.
add another coin to the first photos right eye and the ferryman of the styx is paid.;)
Peace, Joshua

JB Thanx for that Bee info, . If Zeus = Bee king then he/it may correlate with the Bees on the Emperor's clothes [ Book of Thoth tarot]
Also Dogon connexion, which links to Isis and Osiris and Pale Foxes
Joshua - I noted last night[in my synchrodiary] that the Taxicabs can be related to the Ferryman - will write it up soon
Cheers Tod, I don't know much about Hillary's psychic dalliances, but it's doubtless an election winner. to be essentially supported by the spirit of ER
Eleanor Roosevelt
Elizabeth Regina
Emergency Room
Everybody run