Some time ago I wrote a pOSt called N-ARKOZY which ventured to the town of OZARK in MissHouri. Halloween this year found Miss Hidden Dakini sporting flagrant joy outside the GILLIOZ Theatre, which reminds us that tonight they have a show called 'SOUNDS of THANKS GIVING'
A picture of Jenn - Emeraldly-adorned[Emeraldora] [ from her post HAPPY HALLOWEEN [AGAIN] 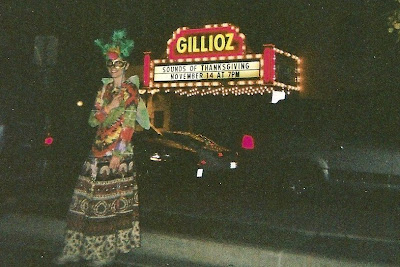 The inclusion of the blog title N-ARKOZY appeared at the same time as this SIMPSONS episode, which contained FLASCHEBACKS meandering around Homer and Marge's romances.
On 3 occassions they arrived at KOZY KABINS - where the OZ has been distinctly separated allowing the 2Ks to stand alone. The Y points to the B & I, standing for Boaz and Iachin, the Twin Pillars. 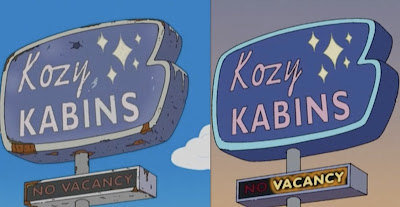 Here we se Marge with a nearly-lover at the K-OZ-Y KABins , and I have added the SUBARU logo [ from the BLOB's - SUBARU GALACTIC CENTRE SYNC WINK] as it resembles the Star-system in the Kabin sign.
KAB resonates the checkerCAB phenom. Checkers = Night Sky + Stars 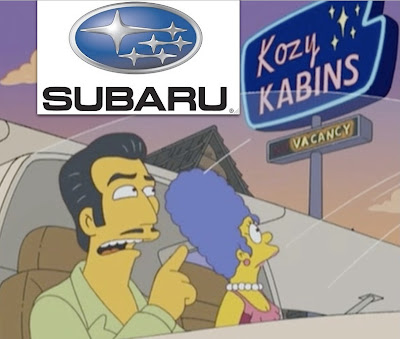 It transpires that both Homer and Marge are on the brink of falling for another, but both transcend their desires. First marge gets her 'lover' in a CHEST/BOX followed a few minutes later by Homer who dispatches his 'belle' into the same chest.
I happened to write this in my last post >>>
"The latin for chest = ARCA from which we can get 'box' and the idea of a 'bow'- ARC/ARK, so Khepera = Ark , the Covenant the bow of the sun arcing across the sky. The Heart resides in the chest."
This makes this chest an OZ-ARK , as we find it at the K-OZ-Y KABINS while
KOZY = tits [ slang for a woman's breasts ] in Czech and KOZI = goatlike, caprice
The Fatman puts the female element into the chest

Once inside the 2 meet and eventually wed, and both thank H&M for their part in bringing them together. They have a daughter from the detonation of their nu-clear hearts within the confines of the chest. CEST [ pron. 'chest'] in Czech = Honour. 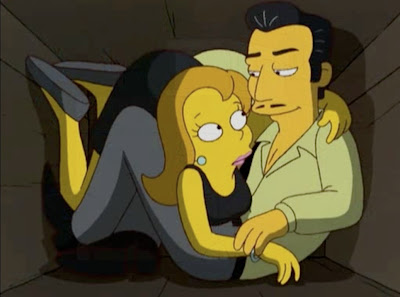 Reatining the idea of Beetle as BOmb, gleaned from its eXoskeleton + its use in Egypt as the sun-bearing beetle Khepera. Taken from the Dung-Beetle that pushed a sphere of dung containing the eggs of its young we may see this as a GREENING BEETLE. The spring following The AUG 6 , 1945 Genocide Act called HIRO-SHIMA saw a fantastic 'greening' of the city. Vegetables, plants, trees [ still standing] burst forth with a renewed vigour, against the predicted 'devastation for years' scenario. Or perhaps the scientist may have known of the 'after-effects' of the im-ex-plosion.
The Green VW Beetle holds the key to the greening hearts in this Simpson's episode, bringing the almost aduterous Homer within close proximity of the even more almost adultery of Marge - now the atoms begin to jiggle. The 4 protagonists meet at the KKabins - the KK indicating 2 opposite electrical poles, for in these Kozy Konfines KK = 11:11, the 2 sets of lovers interact and rebond, like molecules, Marge + Lover, Homer + Lover, H&M Reconciles, the 2 Lovers Consummated, while the word OZ , in Hebrew, means 'strength' and 'goat'. Thus the complements via the poles [ male - female , proton-electron] wedded with the strength and vigour of a goat - OZ-WED 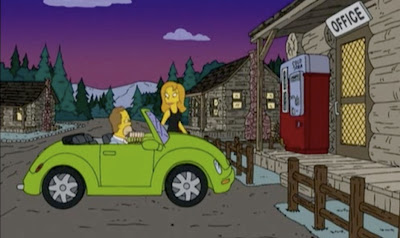 Mention of it is made only in Lev. 11:22, where it is obvious the word cannot mean properly the beetle. It denotes some winged creeper with at least four feet, "which has legs above its feet, to leap withal." The description plainly points to the locust (q.v.). This has been an article of food from the earliest times in the East to the present day. The word is rendered "cricket" in the Revised Version."
Interesting as it mentions Lev: 11.22 which = The first 'true' Soviet Hydrogen Bomb - 11/22/1955 and the 8 years later Killing of the Sun-King JFK Ritual on 11/22/1963. The killing = A Greening ritual - Life-Sex-Death.
Thus the Hargol meaning LEAPER relates to RESURRECTION

MOON - a symbol, among other things, of the illusory, dreamlike qualities of life. The road [DORA] bears us twixt the pillar/towers. The pensive Moon assailed by the BARKing of DoGs, ponders its i-DENT-ity.
BRK[222] = Knee, Elbow ; bless.
BRKH[227] = Blessing
BRCh[210] = to flee, BOLT, escape, run away [ The Ch = a hard 'H' sound, and relates to the Chariot card -run away , run away]
BRQ[302] = lighning bolt [ BOLT=BOTL synching with FLASH = FLASCHE : See Stygian Port post" AMERICA'S FALL FROM GRACE"
BRQN[352]= A Thorn [ which = a really slowed-down form of lightning. The BRQ confined by the N - 'Death' card by Tarot, Card14]
BRQTh[702] = Emerald [ the lightning resisted by Th - High Priestess card , no.22]
The K and Q sound seem to sound almost identical. Sepher Yetsira Tarot gives these 2 the cards SUN and MOON respectively.
[Apologies for Sepher Yetsira DoG-Ma , though I tend to think of it as my CAT-PAW as it has 'retractable clause'].

The Emerald, which is of a green color, is NOURISHED WITH OIL, that its transparency and beauty may not change; this stone signifies St. John the Evangelist.[ From website: ROCKHOUNDing ARKansas - Gemstones of the Bible] 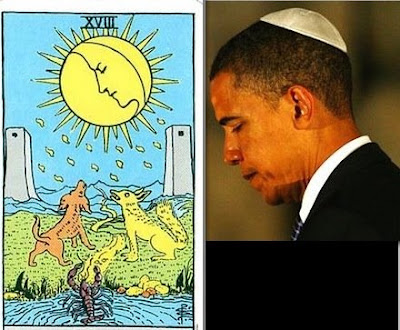 RAK in Czech = Crayfish [ as above] and reversed = KAR
U can fill it up with petrol but it won't take u very far!
A Bark also encloses a Tree and perhaps this idea comes out in the name of a god-bearing vessel - BARQUE, entwining the Bark of a DOG [ what a star] , sailing across the 'egyptian' Sky as a BARQUE, enclosing RA . The ARK resides within the BARKQUE, and in Hebrew the character B = 'in'.
A Song for Obama = BaraKOde.
The FlasHHeart reminds us that The Atomic Bomb, despites it vast, destructive power also represents the Love of men and Women. Humans, often distracted from the SOLVE ET COAGULA dance, with other humes, our 'works', by the torrid beetling about in cash-blown acts express our desire to evolve by exterior-rising our 'love' , our wish for 'union' , as this bomb.
Thanks to STYGIAN PORTS sublime take on BOLT-BOTL we may check the fotky below. Heart-BOTL - BOLT - Flash, which seems to encapsulate so much of our Electro-Atomic-Wonderselves 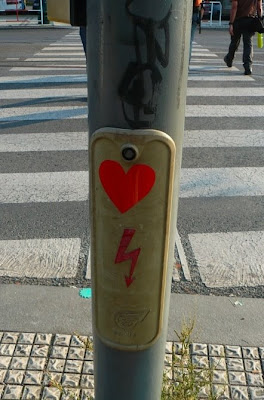 BOTL to BELL. The LiBerty BELLe [ swiped from Through the Looking Glass post - MR.SUNKING RISING] shows the Belle cracked, representing the fem.princip of the BELL - Open + the male FLASH princip. [ Oh and ain't we flash], wedded in the idea of LIBERTY. The logo for the PHILLIES from PHILAdelphia lends the idea of LOVE = PhilOS 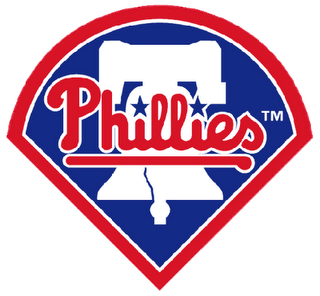 The concept of SPLITTING the atom rolls up with Homer, caught in a ball of luggage, who splits into TWO on hitting this Obelisk in the middle of a X of H-ENDAYES type affair - 'We divide for loves sake, for the dance of Union' 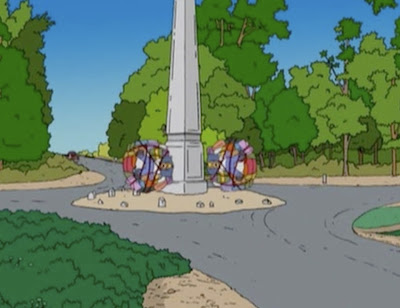 Bell and the O-B-EL-isk [ Philly and WashingtonDC, DeCeit of Government], melded into Atomic Fission and the fine art O-F LOVING, a crack and a flash, then the rumble of thunder - did the Earthh.... move 4U? 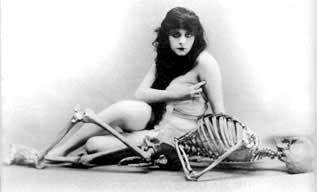 X-OSkeleton = KeY
Posted by aferrismoon at 1:38 AM

Great post, not much to add except that "Sarkozy" popped into my mind from the start ;p

Cheers. I think I included sarkozy in the original post to reflect the drip-drip narcotic effect of various heads of state.
Gimme the hope Dope, even though I know I can change , anytime I feel like

Man I got a fuckload to learn!!!
I wish you posted daily ;)

I grasped "Marge + Lover, Homer + Lover, H&M Reconciles, the 2 Lovers Consummated." Which is undeniably brilliant. And that moon card pick of Barak is L.O.T.P. video worthy no doubt.

But I find that I need a template of some sort to understand what your saying. I know the kk 11:11 (the basics of Syncro) stuff but I would like some guidance as far as Tarot and Hebrew go. You reference these two tools in most of your posts and I have found it most relevant and soluble but In my case a little extra knowledge is required. I`m not asking you to dumb down your posts as you might think(I think that's despicable.) I just see the realm of tarot as something I was raised to think of as `evil` and I would like to know where to start in your opinion. As for Hebrew... it is what it is. I can't help but think you got a copy of 'Bible code' or something by your side. So(OzOS) I'm requesting some code for my Operating system.

Cheers AA.
I'll post some kind of Hebrew to English decodifier.
Lately read -
J.S.Downard's CALL TO CHAOS
and Denis Stillings = MEDITATIONS ON THE ATOM & TIME
Both essays from Adam Parfrey's APOCALYPSE CULTURE [ the 2nd edition I think].
Stir in the OZ memes + a jolly helping of ideas from other blogs.
In this case Stygian Port [ It was from there I got the Barack pic] and Hidden Dakini gave the input to really inject it with an interactive life.
Carlo Suares - whose work I lift seems to instil a current into the Hebrew stuff.
Hebrew letter/numbers once remembered allow a lot of 'symbolic' cross-fertilizing
James Joyce - Finnegans Wake - beyond form.
R.Buckminster-Fuller - SYNERGETICS Vols I & II - defines form.
Crowley's poetry , as well as that of Capt.JFC Fuller - intense language.
The Media , of course.

Try not to eXplain stuff too much , more leave gaps , as I doubt anyone will understand a whole post [ were it relevant to their lives] but some things will 'synch'.
Blending the pics with the words , making the shots 'move' the language.
What am I saying, of course , it's Accidental Alchemy .
An example of it occurs with first and last foto on this post

Am beginning to think "we are the cosmic 'WE-VERS' [weavers] to creating. Your posts always bring amazement and awe. Always fun to watch and read!

Your right--nobody gets a whole post, but thats part of the magick, those gaps that leave new idea seeds and those grow!

Thanks Michael
Note : The Nu - Clear Flesh , use of Eugenics to a more general manifesto.
Thanks for your pressing!
WE-Vers = We - Towards

Liked this post. Lots to absorb. I had a thought when reading the portion of the "cricket". Remember the weapon given to J (Men In Black) and its name "The Noisy Cricket". Really good stuff.

I've armed my(s)elf with a Flash Heart! Have you been to visit http://www.climbingtowardthelight.com/? You will find the Cricket writes! Cheers;D

Thanks Ironmoon! Will take recommendations and implement a strict regimen of mental exercise!

"Your right--nobody gets a whole post, but thats part of the magick, those gaps that leave new idea seeds and those grow!"

The Cricket , too, coms into Egyptian mythology , Joyce makes use of the Grasshopper and the Ant in The Elysian Fields [ Champs Elysee]
Also I use to play cricket at school. My great-great grandfather played against the first Australian Team to tour England in 1868 .
Jenn- did u see the Ist and last photos - hand on Heart

That was great spotting on the K OZ Y Kabins.
For a spot of Southern Cross(ing) check out the starry, starry (mid)night 'blue' of the OZ(tralian) flag:

Cheers WW - got the Cross, pretty similar , - criss-cross.
If South = Aus then it = Oz so OzCross

I'm a little blown away at the moment. Did no one mention the uncanny similarity the male suitor bore to Jack Parsons? What was the name of the child of the union???

The FAT MAN putting the woman in the nuclear chamber. Too much! WOW!