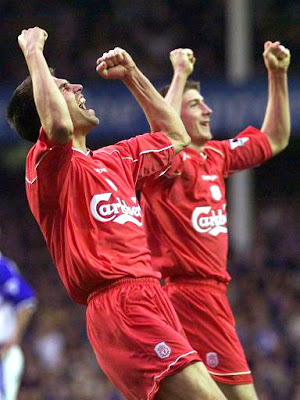 Thanks to a comment from UP YOURS who noted that Liverpool have another player called RYAN BABEL. In fact the Babel playing for Liverpool is RYAN , who I erroneously called MARKUS Babel.
Markus Babel , a German , played for LFC in the the treble-winning team of 2000-1 , he's above on the left and his names spelt BABBEL.
Apologies for the inaccuracy 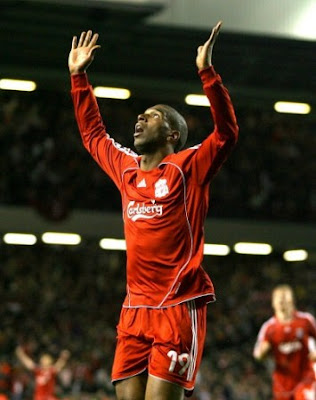 Nevertheless we do now have Ryan which leads to O'Ryan and then ORION
ORION BABEL
18.27 Prague time- relooking at the photos it's apparent that the hands convey a deal of NRG.
The hand in hebrew = YVD -Yod - the Hermit card, but the fist and palm go to KPh. In Hebrew some wourds have 2 numerical values, such as Kaph. The palm relates to Kaph =ing 20, and the fist to Kaph [ as a final letter] =ing 500.
Using the Sefer Yetsira the K=SUN Tarot. Considering that when one scores an all important goal footballers tend to offer themselves prostrate, clench their fists , open their hands , dance like an errant belly-dancer , all acts of praise/worship, and most religions in living mem seem outwardly @ least Solar oriented , I wonder whether the Seph might make some interesting 'reading'[ watch out , Hidden Agendar]. In other packs Kaph = The Wheel and RYSh [ Resh] , often given as the Hebrew character for the Sun , though it's related to Kaph as R = 200, means Head.
Posted by aferrismoon at 7:48 AM

If I may side-step into the savoury snack department for a moment, (does one eat crisps while watching football?) I'm reminded that here in NZ, two of the biggest brands of potato crisps are O'Ryans & Bluebird.

... & AF because I can't resist a comment you posted a little while ago re Bahrain here's one for you: