Of Pandas and Lyres 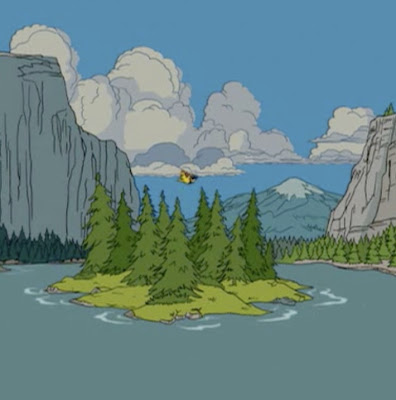 Martin Prince takes a spectacular dive to find himself LOST on an island ....somewhere. Springfield thinks him dead, torn apart by a cougar. Bart and Lisa know him murdered by their childish acts of subterfuge and attempts to aid the hapless angel of intellect. Martin proves ever resourceful taking but an hour to get off the island. 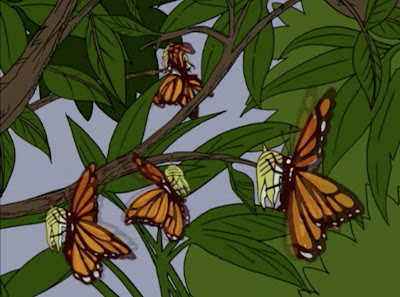 Bart's conscience leads him to develop Martins chrysali where he and Lisa confess, apparently only to the butterflies, listening to Martin's Music for Butterflies, a piece on Lute timed for the emerging. The Lute playing continues after the Sony cassette-recorder is switched off, but with confession appears NELSON, detectiving like COLOMBO, to listen in and catch the dastardly pair. The truth emerges with Nelson's flawless talent for music and the exodus from the Chrysalis. 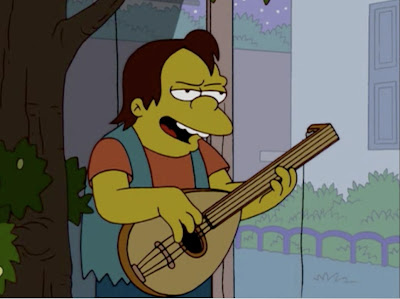 The only Lutenist I know is from PhilipKDick, JOHN DOWLAND who composed FLOW MY TEARS, which became the title for PKDs book highlighted in Southland Tales, alluding to the Acts of the Apostles. I don't think he was overly fond of butterflies, in one short story they travel back in time on a timetravel vessel and kill humanity with their poisonous ways. i believe Martin Prince will grow uo to be head of some Montauk-CIA-Illuminati organisation which he will then lead from its saturnine, paranoid ne'erdowellness. Martin as head of CIA, position offered by Ralph Wigham , President. 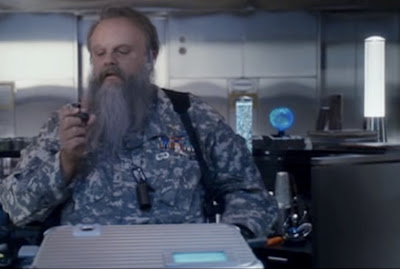 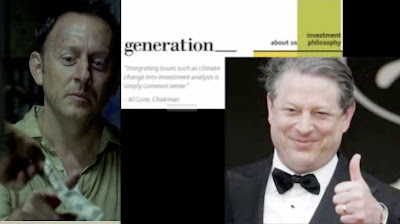 AlBen - they look a bit similar except that Al has been on a special polar-bear diet, put on a few pounds since the election years, must be all the 'good works'. Ben Lynus - BL[32] - Baal - King of the Island, in cahoots with Locke. Big AL[31], king of the environment [and peace], in cahoots with Maurice STRONG. BL + AG = BLAG, which is British slang for speaking untruthfully to get something - blagging it.
'Integrating issues such as climate change into investment analysis is simply common sense'. Like Ben , Al just wants to save us from the bigger danger, which we are too little to do aught about. Ben needs to get $3.2m which links to BL-32-baal, he too knows the greater danger and only he knows how to get the Islandees to safety. John buys that for a dollar.[ Synchromystic librarian's last post is of a time-map and a TREE of LIFE , which has 10 sephira and 22 paths = 32]
Below the Panda-Taxi scene. The Panda, B&W slips in due to Panda's greater popularity in the orient. Thus the synchs transform , shapeshift to assimilate new environments. B&W animal in a chariot mimics the RiderWaite'Book of Thoth tarot designs. In Jakes post The WW3 Stargate Mega Ritual he delivers WWW. This = 23rd letter of the alphabet and 3x23=69. That was March 9 and it emerges fairly quickly via a Lost episode with a few synchitting elements, incl the Twins crossing the Zebra crossing traffic sign ahead of the Taxi. Panda = symbol of World Wildlife Fund WWF
19 came up with Kate as a mother and it = ChVH, which = Eve, Mother of all Living. On the numberplate we have 38, 2x19, and a 2nd child is born to Sun in this episode. That makes TWINS , Erin [ or Aaron] and Ji Yon.
23 + 38 = 61 which = ANY[anni, like the one who goes to get his heart weighed in The Egyptian Book of the Dead] = I, add the flirtatious 69 and we have 130 which = OYN = eye. All rather unbelievable, I agree, nevertheless, true 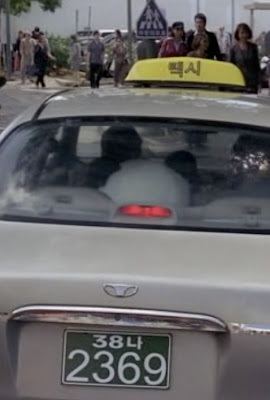 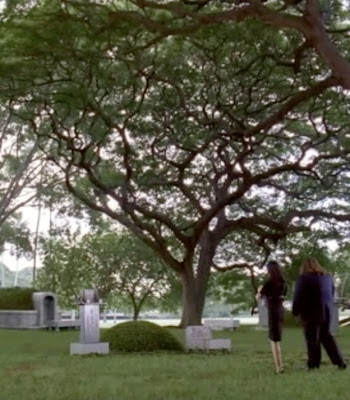 While Jin is alive at various times in this episode he also seems to be dead. Sun and Hurley present the baby girl to Jin. Sun says that he was right, it was a girl, but how could he have said that if he was already dead. Korean graves and tombs seem to accentuate the mound to great effect, Pillars included. The 2 actors playing Sun and Jin KWON both have the surnames KIM. 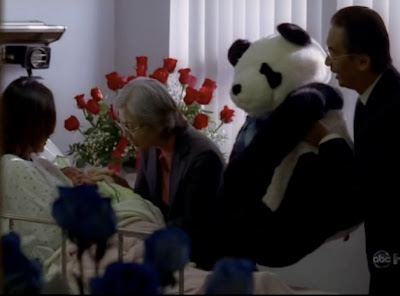 While he's alive , sometime, he races to present a PANDA to a Chinese ambassador, opening relations between China and Sun's business mogul father. He gets there jsut in time, tieing a blue-collar round the neck for a boy. We assumed him to be racing to Sun but he merely acts as errand boy for her father. The ward blooms with red+blue roses - these 2 colours appear in the grail held by the Charioteer in The Book of Thoth Chariot card, the B&W animal lends us the animals afore. 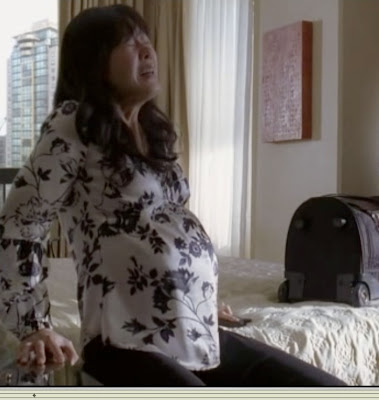 Sun garbed in B&W and showing her SUN-MOUND - see Sun Tarot card, goes into labour, and I start to wonder if this B&W business links to pregnancy/birth, the chariot a womb or womb-an, B&W, the first programme, from yin-yang to checkerboard to Yi Jing, possibilities emerging from source.
Jin's gravestone - 11/27/1974 - 9/22/2004. In its Korean vertical style the 11-9 sticks out like a sore tum. The 9 from the deathdate divides into the 27 of the birthdate, the 11 from the birth into the 22 from the death, a 32 in a roundabout way. 22 - letters in Hebrew alephbeyt, this extens to 27 when the final forms are included.30 years - LMD-Adjustment .
1974 , this was the year PKDicK met Zebra/Valis and Nixon took a tumble through the WATERGATE.
Sept 22, 2004 is the date Ozeanic Flight 815 took its tumble through a time&watergate and the date the PILOT episode aired on ABC. Perhaps the PILOT episode crashed and LOST was never aired.
On the same day the US Senate voted Mr.Porter Goss in as Director of the CIA by 77-17. These two numeros in Hebrew - OZ -goat, strength and GDY - Hebrew name for astro-sign Capricornus,[See post G'DY OZ sed PAN] So on 9/22 the Senate invoked twin goats in the form of a vote 77-17 while a fantasy jet draws in half a nation [ 3 years 11 days after 9/11] to see the latest episode with a birth-celebrating PANda beetling off in a taxi. 3/11 I slipped into the last post, Etemananki gives it as date of the swearing in of the Sov.Knights of Malta [ an island] 79th Grand Master]
22 verses hath the Hebrew alephbeyt thus the Tarot , Revelations [ featured heavily in Southland Tales] contains 22 chapters, Crowleys Book of the Law has 220 verses [ 5 x 44], and there's a 44 on the gravestone. It = DM, blood . Finally the 70 and the 90 = O and Tz together making OTz, a TREE, [ Otz ChYYM- Tree of Life]. Trees grow , branching out covering Jin's grave, perhaps he is emerging 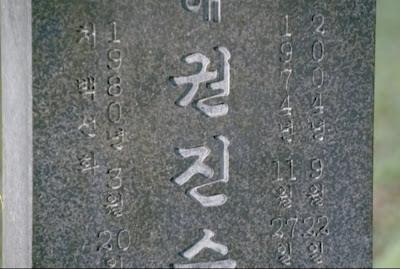 Posted by aferrismoon at 6:21 AM